Press: Information and contact details for James Strauss and his new book "30 Days Has September"

From a traveled elementary school education, changing schools ever two years, to attending a small liberal arts college, I graduated to a leadership position that turned out to be a ‘hanging by the fingernails’ survival position in the Marines Corps in the Vietnam War, 1969.  From a hospital bed, when I finally found it was likely I would live, I looked up and asked God for one favor.

I asked not to lead a normal humdrum life.  I now believe that God heard my prayer and pointed one finger down to grant my request.  Outrageous fortune was smiled down upon me with all of its travel, pain, depression, elation, danger, adventure and total lack of believability.  For a time I tried to have credibility until I discovered that my own credibility was without meaning.

This novel is set in the very center of the time of most difficult combat experienced by a United States Marine Corps rifle company. A second lieutenant, only days from training back in the states is ordered, under fire, to assume command of a company of cast off Marines, all out in the brutal bloody jungle because of the either the worst of luck or the most minor of offenses or infringement.

The outnumbered and little supported company is at constant war with vicious units of the North Vietnamese Army while at the same time tearing itself apart every night in deadly encounters between its racially mixed elements.

The enlisted ranks lack all respect for their untested and inexperienced officers, while the officers fight them right back using supporting fires on the enemy as well as their own warring factions. All the men are ruled by terror and fear of the end they know they are not likely to avoid. They are not going home. They are not going to the rear area. And they are only to be kept moving through a valley of death called the A Shau, with only the manner of their passing in question.

That same company so riven by internal strife, however, remains frightfully effective in fighting the enemy. This account of the reality of agonizingly brutal guerrilla combat is written from the perspective of the new lieutenant who sends his last will and testament home to his wife after only three days in combat.

A riveting tale of a Marine Artillery forward observer’s life under fire in the MAW. Shack LT! One of the best I have read.
By Roger W. Kemp M.D. on April 5, 2017
Format: Kindle Edition|Verified Purchase
Riveting! LT. Strauss keeps your attention with each chapter. His ability to tell the story of the American Marine’s contribution and sacrifices made in a God awful series of battles for valley in Vietnam Nam that few in the “World” could fathom is riveting! Only those that served could understand at the time. Those Vets have lived those recurring nightmares mostly feeling they were alone. Lt’s manuscripts from his and his companies time in hell have touched many vets helping them to know they were not alone. This book is therapeutic for those that endured. These books should be required reading for all of our young Warriors in OTS (Officer Training School). This book is a Riveting compilation of lessons of survival in crucible we called the Vietnam Nam War. Sierra Hotel LT. Strauss! A great book!
5.0 out of 5 stars A book that is written by a truly gifted author, James Strauss.
By Nancy Henderson on April 4, 2017
Format: Kindle Edition|Verified Purchase
A book that is written by a truly gifted author, James Strauss. Through his own experiences, he will take your heart and soul into the Ah Shau Valley in Vietnam with these young men as they try to overcome the fear and insanity of the horrors of the Vietnam War. It takes great courage to write with truth about such suppressed memories and pain but by doing so he is helping so many Vietnam Viets who were there and came back to an ungrateful nation. This is a must read. 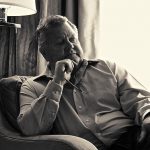 James Strauss has published three novels: The Boy, The Bering Sea and The Warrior and recently published an Arch Patton Saga, Down in the Valley and finishing another Arch Patton story, It Was 1993, plus  publishing a weekly Midwestern Newspaper, The Geneva Shore Report

“Philosophers of significant merit and reputation have struggled with the meaning of life and the survival constructs we humans radiate outwardly while constantly denying them inwardly.  Monty Python’s The Meaning of Life might be a more accurate way of looking at the human condition simply because of its heavy use of humor and its intrinsic silent message that the meaning of life is simply what we as individuals mean it to be. There is no answer anywhere available, nor is there likely to be, about why we are here on planet earth, where ‘here’ for the planet actually is or, in fact, about what we or the universe are.

I was thrust into a “leadership” position in 1969, which I’m detailing in my latest book 30 days Has September, during the Vietnam War. As a fresh 2nd Lieutenant in the United States Marine Corps I quickly learned survival. While healing from wounds I realized my calling would be to share grounded concepts, through the writing and publishing, to think and discuss what life itself is all about.”