8.7% Increase, From The Wilderness 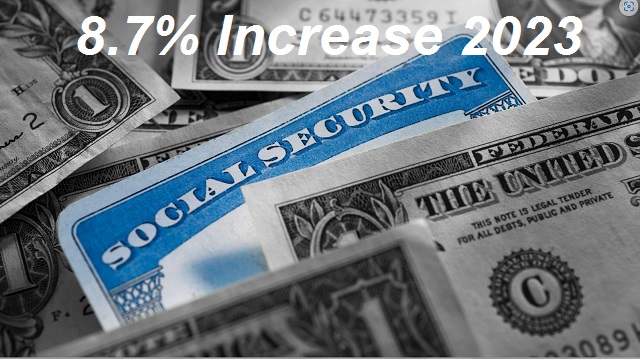 The coming 8.7%t in cost-of-living increase in social security payments, to be effective in January of 2023, is huge.  Not only is it huge to the impact it will have on the incomes of older citizens dependent upon the program for any kind of comfortable retirement, but it’s also a huge indicator of just how strangely divided the country really is economically.   One sixth of the entire population of the United States gets a social security check every month.  The average check is for about fifteen hundred dollars.  The number of citizens effected by these checks is much more difficult to measure but it’s significant.

The $130 a month, or so, increase doesn’t seem like that much, given that the average paycheck of the population as a whole is around $4500.00. a month.   How is it that this coming set of payment increases came to be?  Well, it doesn’t take a genius to reflect on the number of elected officials who’ve fallen on the side of minimizing social security payments or even getting rid of them at all.   There is a deep divide in this country, in belief systems, and that divide is neither changing nor making many adjustments.  This controversy is emblematic of what’s going on in other areas of data accumulation and distribution.  The effect, wherein new data does not seem to have any impact at all on long-held or even short-held beliefs is new.

It’s a product, I believe, of the deadening of the public consciousness brought about by mass media being able to broadcast anything under the freedom of speech provisions of the Constitution, whether the data is presented from internal investigation or from paid sources (such as advertising).  What’s being discovered, of which this deadening is merely an end product, is that the political ads of today are so crushingly negative, attack-oriented and destructive…that they aren’t.  The public has been overwhelmed, soaked in the ‘bloody’ rhetoric and numbed into ennui and uncaring discontent.  That kind of societal reaction has bled over to almost all other parts of the media presentation complex reception of all data.  Nothing is being believed, of new information being broadcast out through the airways and on the Internet, and that means existent belief structures are being held to with more and more solidity.  As with the results we all live with, from the effects of scientific discovery and application, this willful ignorance, accidentally created, but as relevant and evident as can be, means that there can be no change.

Things remain the way they are when new data cannot be accepted, incorporated and used to make things better.  And ‘things’ in the real world do not remain the way they are.  The universe isn’t structured that way.  Entropy is the word used to describe the Second Law of Thermodynamics (note that the words used here are about law and not about theory, which means there’s no opinion involved).  Things go naturally from an organized state to a disorganized state over time.  It doesn’t matter if the ‘organized’ state is that of a rock.  Neither the culture, nor the societies it’s made up of, nor the human beings who populate the planet can remain in an organized state without what we call work being applied. The mass media today is slowly removing the word ‘work’ from our cultural lexicon.  We have become a culture so deeply steeped in outrageous lies that truth, or truths, cannot surface in that sea of deception being created all around us.

Beliefs formed in the past were not all based on truth, as can obviously be determined simply by reviewing some of the many religious belief systems developed over time, and still in full force today.  Belief systems have been created for control of others as well as for the building and advancement of cultures and individuals.  But the nature of those systems of belief, developing over time, have become much more refined and based more and more upon fact and less on other people’s words.  This condition we call civilization.  The blurring of fact, the introduction of ‘alternate facts,’ and the disbelief being built into the very foundations of human communication are creating an entropic atmosphere and effect that may be as dangerous, or more so, the human condition than the threat of nuclear war or the developing spread of global warming.  The loss of or descent of civilization is a form of the effects of entropy. We must all work to fight that descent.  The extra $130 a month may very well help in that pursuit, as small as the effect is likely to be.