Why do they call it Black Friday?

Yeah, I know that the phrase came out of Chicago from the police there and it was all about the traffic and congestion mess associated with day after Thanksgiving shopping. Now, it’s not such a negative thing, except for some of us.

Obviously, there is a large segment of the population that just loves to go out and get no bargain on stuff that’s supposed to be priced lower and also to be a part of the jam of parking and humanity who are supposed to be pursuing the same thing. If logic played that big a role in our culture then Donald Trump would not be leading the polls and we would not be sending trillions of dollars to sandy caves of misery in the Middle East.

But here we all are. Staying in or going to the coffee shop are wonderful things to do today. The high school football teams (Packers and Bears) played yesterday while we all consumed our turkeys. The game was so bad it was funny.

Aaron Rogers was so terrible that there were chants in the stadium for Favre to get suited up! He was there, inexplicably, to get his number retired as a hero even though he dumped the team to go elsewhere after they dumped him for deliberately throwing a game. 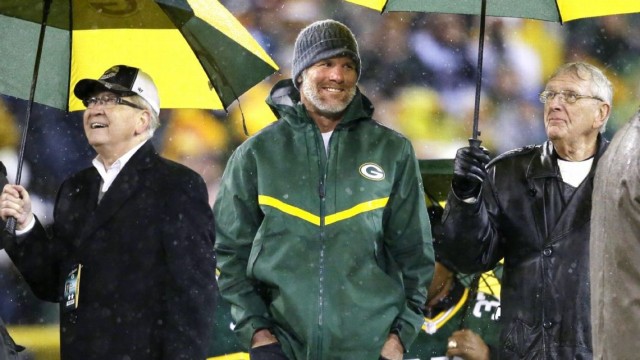 Brett Favre basks in the moment during his number retirement ceremony at halftime of Thursday’s game. Jeffrey Phelps/AP Photo