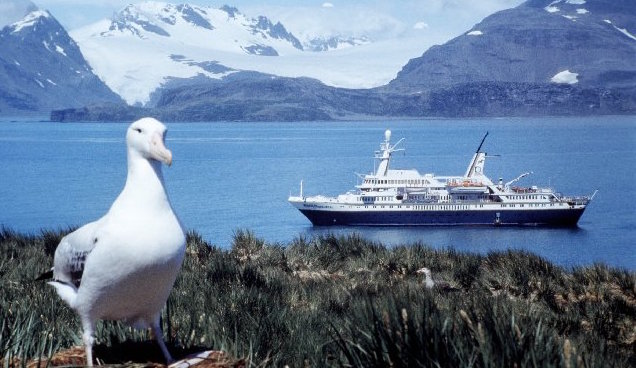 The Pass of the Isle of the Tsar of Russia

Instead of going to my own cabin, I headed directly down to Botany Bay’s number 36. There was something about the way in which the Basque woman had looked at me earlier, which was drawing me back. Don had stayed behind to consult with the passengers. He had begun his masterful job of caging large tips from them. The other staff crew all muttered in mild complaint, and envy, that Don was the acknowledged master of that sales technique.

I didn’t knock on Don’s cabin door when I got to it, keeping with the ship’s tradition. The Basque stood over the sink, as I entered. She wore no top and did not even turn from her ministrations. I went over to the foot of the only bunk that was made and then sat down to wait. My own physical presentation had become a matter of public display. I was fast losing my respect for that of others. The Basque threw a sweatshirt over her head. She ruffled her beautiful hair up and back with both hands, and then faced me.

“I need to talk to you,” she commenced in a very quiet, but distinct voice. Hers was a strange accent, but not too strange. My eyes registered surprise. “Don said you didn’t speak,” I began, but she cut me off.

“Not to him, or many others. I do not need to speak to him, and I don’t care about the others. He understands. But I need to speak to you.” I acknowledged, dumbly of course. Just one more peculiar apparition on the voyage, I concluded to myself.

“Don’t hurt him,” she said, spreading her hands out in some form of supplication. I simply narrowed my eyes.

“My name is Maialen. It means Magdalena.” She reminded me of Magdala on the coast of Galilee. It involved, like Fatima, another Catholic mystery. I’d been there. Seems that everywhere people saw the Blessed Virgin, I later appeared, but I remained silent.

“You have some purpose here. I don’t know what it is. Don thinks you’re some sort of spirit guide. You’ll get him into terrible trouble. He’s a gentle man. Not like you.” I breathed in and out. Not like me. Somehow, all of my specialized training and experience had been thrown out the first porthole I had passed when I stepped aboard the “World Discoverer”   Less than two days into the mission, and I was not doing well at all. Don opened the door and stepped into the cabin, seeming to fill half of it.

“Hey,” he boomed, a question mark in his voice and on his face.

“We need to talk,” I said, in some exasperation.

“Hmm,” He replied, and then sat on the unmade bed. Maialen sat beside him, one hand placed protectively on his thigh. I cleared my throat and began.

“Borman is a problem. I don’t know what to do about him. We’re close to Russia. I need to get to Provideniya and do some stuff there. I need to stay aboard until that’s done. Only about a day or two. Can you help?” I finished and waited, having told Botany Bay more than I intended, but having no other choice. He laughed, ruefully.

“A couple of days? Ha! Have you been paying attention to our course? The weather’s blowing. We’re running down a following sea. We can’t make headway up that peninsula. We’re headed down for the Pribilofs. We’ll be at least four, maybe five days, out from the peninsula.” I sighed. There just seemed to be no good news at all, as the circumstances surrounding the mission continued to spin out of control and conspire against it.

“Alright,” I said, in defeated acceptance. “How do I stay aboard this thing until we get to Russia?”

Don guffawed deeply in his chest.

“You’ll stay aboard. No place to dump you. No airport on the Pribilofs. Besides, Benito likes you. Really. The Filipinos believe she likes your scars and other parts.”

I colored instantly and noted the faint smile flicker across the Basque’s face.

“Captain can’t fire you. He can throw you in the brig, but only the cruise director can fire you,” Don went on, “so there you have it. All you have to do is sleep with Benito and your future is made.”

I almost choked. The expression ‘it’s a rotten job, but somebody’s got to do it’ came to my mind with a bad aftertaste. A sickly expression crossed my face.

Don continued, “Oh, don’t cough up any hair balls. There’s more to it. You’re the ‘de facto’ ship’s doctor, the only anthropologist we have, and then there’s the diving part. Your many jobs are secure.” Don folded his arms, although the ship’s increasing movement made it difficult for him to sit without holding on to something.

“I don’t think there’s going to be much diving done in these conditions,” I responded, unable to think of anything else to say, and hoping that Don would not ask any more probing questions.

Then I almost fell off the end of the bunk. The ship had skewed wildly, as a wave passed beneath. I grabbed for the bulkhead. “How big a sea does it take to make this ship move like that?” I blurted into the sudden silence.

“Maybe sixty feet,” Don responded, but he did not smile when he said it.

He moved to the cabin porthole and looked out. “Borman will be looking for a bit of succor out here. We can’t take this kind of beating for long.”

I joined him at the porthole. “The ship isn’t tough enough for simple swells, even huge ones?” I asked, in shock.

Don turned away. “Oh yeah. No problem there. But the passengers get upset and sick. It’s bad for business. He’ll find us some calmer water.”

I stood up and headed for the cabin door. “Thanks,” I murmured, as I passed the Basque. She reacted, almost imperceptibly, as I went by. Don responded, as well.

“Think nothing of it. Thanks to you, for the carvings, and getting me out of the trouble you got me into. And, especially, for the vivid image in my mind of you and Benito.” I went out to the corridor which had become a twisting tube of gravity defying leaps and bounds. There was nobody out at all. I made it to my cabin. I was supposed to dress for dinner. I rummaged through the gear in Don’s bag finding no sports coat or wool slacks. Only my evening shoes were in the bag. My sports coat was hanging on the bathroom door. I examined it. The entire outfit was perfectly pressed. Filipe had struck again.

I held tightly to the bunk and the bulkhead as the “World Discoverer” was tossed about in the seas.   Realizing that I did not want dinner, I laid down on the bunk. There were straps hooked into the bulkhead wall. I now understood what they were for. Pulling the nylon cords up from under the mattress, I hooked them one by one across my body.

“A nap,” I whispered, “my life for a nap.” I faded instantly into a deep sleep, lulled by the magical swaying of the great beast under me.

When I awoke, I tried to jump from the bunk but was held in place by the nylon bands. I could not even bring my hands up to cover my ears. The anchor’s noise eventually played itself out. At the end of the roaring came a distinct loud ‘ping’ that had not occurred before. My brow furrowed as I carefully unlatched myself. There would be no more napping that day. I checked my watch. It was evening. Hours had passed. And the ship was no longer tossing and twisting. All was calm. I decided to head for the fantail and sip coffee at the Lido Bar. I was trying not to think of Marlys, from whom I had heard nothing since her bizarre statements on Little Diomede. I was failing badly.

Don flew through the door before I got to it. “This is your big chance,” he said, breathlessly.

“Russia?” I asked, right back, with hope in my expression.

“No, not Russia. I told you about that. We’re anchored in the Pass of the Isle of the Tsar of Russia, between two small islands. We’re safe from the big waves until they abate. Well, we were anchored, anyway.” He looked at me intently, when he finished.

“Yes, were anchored. Hence, your big chance. The anchor snapped off and we’ve lost it.”

I eyed him, not getting it but recalling the mysterious ‘ping’.

“You idiot!” Don hurled my way. “The anchor and chain are worth about seventy thousand dollars on a ship this size.” I still did not get what he was talking about. Don continued, “Borman has personally asked, through Benito, who talked to me, if you would go down and retrieve the damn thing. You’re big chance.” I blanched.

“Are you out of your whacked out Botany Bay driven mind?” I barked at him, in shock. “Out there? In that? Down to whatever the hell is below? In this weather? No way. Not now, not tomorrow, not ever!” But Don was not put off. He merely stroked his chin.

“I was afraid you might say that. If you go you’ll save Borman’s butt. He’s not really the captain you know. This will be his last voyage substituting if he has to report that he’s lost the anchor. Besides, Marlys told me that you would have the courage to go.” I reclined on the bunk.

“Don,” I spelled it out slowly, “I am not the diver that my resume says I am. I haven’t put on a tank in years. I’ve never commercially dived, nor have I ever gone down in water this cold. A dive in this water, even just to look around, would be damned dangerous.”

“Marlys…” he began, but I interrupted.

“I don’t want to hear any more mumbo jumbo from or about Yemaya!” But all Don did was gloat. I got off the bunk and paced back and forth through my small space several times. Then I stopped and frowned.

“That Teutonic Nazi of a phony captain didn’t ask Benito to ask you to ask me, did he?” Don looked at me with the same grin on his face. “He’s ordering me to go down, isn’t he?” Don displayed more teeth. I groaned deeply and noisily. Then I moved to grab my sweater and an extra pair of socks out of my bag. The dry suit would be cold. Lifesaving, but ultra-cold. I’d need the insulation of wool. 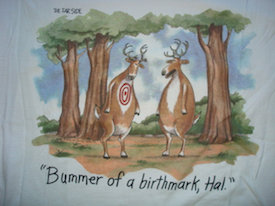 Don applauded, as he watched me prepare. “You’re not going because he ordered you, are you?” he inquired.

I continued my preparations, getting a jar of Vaseline out of my ditty bag. I would use the mineral grease on the regulator, and for my hands and face. “You don’t do well with authority, I seemed to have noticed.” I just looked at him, resigned.

“No, you’re going for Marlys, but you’ll never admit it. Dutch is right. Yemaya has a target painted on that scarred chest of yours. Like that cartoonist, Gary Larson drew that time…’Bummer of a Birthmark, Hal!”

I headed for the gear locker without a backward look, trying not to think of the image of a bullseye tattooed on my chest.