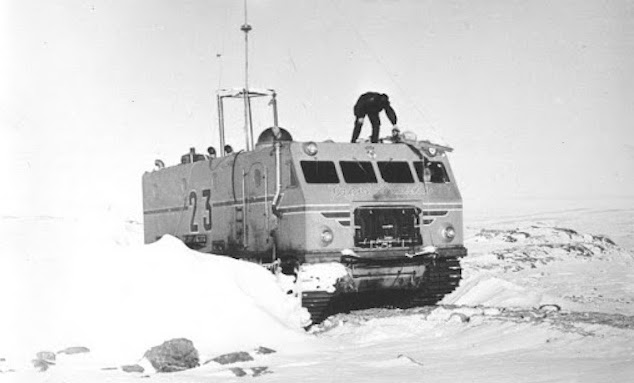 The Tundra Cat whined over the top of the soft summer mud at top speed. I knelt next to Don, who lay on his back. The vehicle’s constant movement caused him to groan, with each small bounce or course correction. I prepared another syringe with ten milligrams of morphine, which I administered into the exposed hollow of his undamaged shoulder. I aspirated to make sure I had not entered a vein before I put light pressure on the plunger. I then refilled and reused the same syringe on Dutch. I flashed him a look of encouragement before tossing the syringe over the side. Only one was left in my bag, and not much more than one shot remained in the bottle. I hoped that I would not need it for myself.

Don’s wound was as superficial as Dutch’s. Both had been turned to the rear, to watch the action behind us, at the instant they were hit. They had not ducked beneath the thick aluminum edge of our Tundra Cat’s top. Aluminum, even more than a quarter inch thick, is not normally very effective as armor against small arms fire. But the rounds, which had been fired at us, had been at the very end of their trajectories. As with the final combined effort of the guards, during which many rounds impacted on the side and back of the vehicle, none penetrated the cabin. We had been extraordinarily fortunate, but luck was a fickle entity.

I bandaged and taped the messy wounds. Next, I got the wounded vertical again, and made them passable. Our return to the ship had to be as ‘normal’ as when we had disembarked. Kessler was going to be in no mood to allow exceptions for anything, and gunshot wounds were tough to lie about, even under ordinary circumstances. Timing was again vital. We needed Kessler to hold the boat just long enough for us to get aboard, and then, once we were, to immediately make for the open Bering Sea. I had overlooked how I might convince him that traveling the entire length of Providence Bay at the 'Lindy’s' top speed was compulsory.

If my planning had gone well, then Kasinski was dead, along with Alexi, and quite possibly an assortment of guards. What might have involved a period of brutal interrogation and incarceration before, would now, given the likely circumstances, involve summary execution. The guards would overreact to the killing of their own, as almost all military organizations around the world did, including my own.

I checked out the boy we had plucked from the gulag. He was the reason for my presence in Russia, and all the mayhem we had just survived. He had said nothing since being retrieved. I leaned close to him while scrutinizing my vicuna coat. No cleaning job, of any kind, could restore it to life. I also noticed that he treated the covering as if it were his early childhood blanket. He hugged it to himself, and secured a piece of the collar in his mouth. His eyes were watery but intelligent.

“Are you okay?” I asked, my face only inches from his.

My concern was real and I let him see that.

“I’m okay,” he whispered, almost too softly for me to hear. But then his volume rose a bit. “Why did the fat man call you Indy?” he questioned.

I rubbed my hair with one hand. I had no idea how to answer him.

He said the words, as if that somehow explained his upside down teardrop shape.

“We call him ‘Indy’ because he’s just as crazy as the idiot, played by Rex Harrison in those juvenile movies.”

The kid relaxed for the first time since I had met him.

“It’s Harrison Ford, not Rex Harrison,” he shot back at Hathoot.

“Whatever,” the Purser said, looking away, his pupils still fully dilated.

I checked his pulse, which was a little fast, but within tolerable limits for the situation we were in. I checked our back trail, but could see nothing. We had come far enough for the Navy personnel, with the guards, to have crested the top of the valley wall, if they were still pursuing us.

If instead they had returned to the old House atop the gulag, retrieved Captain Cherno, and then raced for the Airport, the timing of their movements would be critical to our survival. I didn’t think their chopper would get into the air, and then interdict us in time. But the chopper would be in direct contact with the Heavy Cruiser. It, in turn, would be in direct contact with Providenya. Our noose might very well be constructed of radio waves.

If we did not beat the other vehicle, in our sprint to the “Lindy,” then we would drive right into oblivion at Provideniya. At least one T-72 tank was there, plus crew. It might be temporarily disabled, but where there was one tank, there was at least one other. Tank squads, the world over, ran with at least two in tandem. They were also, normally, only put in the field by platoon. That would be six or eight tanks, and that would be a death sentence for us. If we lost the race.

We approached the city’s outskirts. I crawled back to where Don and Dutch sat. Both had their coats on. I, the agnostic, thanked God, again, for the warmth, and time of the day. They had been shot without their coats on. Bullet holes in clothing were more distinguishable than most people would have thought.

“Here’s the revised plan,” I ad-libbed, crouched down between them. “You two get into the Russian Jeep. I’m gonna give the driver another bit of cash to move fast. When you get to the dock, walk aboard the ship using the main gangplank, like everything is as normal and boring as always. Get down to Doc Murphy as fast as you can. He needs to clean your wounds. When the bullets went through, they took bits of your clothing along with them. That stuff will cause an infection if it’s left in the wound. Have the Doc swab the wounds out, then start whatever antibiotic Doc has laying around. He’ll do whatever you tell him. Dog the infirmary door when you are in there, and don’t let anybody in, or talk to anybody, not for an hour, or so, anyway.” I finished, expecting questions.

There was only one, from Don.

“What are you guys gonna do?” It was a good one.

My brain had been working at hyper-speed, trying to solve that problem. Hathoot could not walk aboard. The boys could not escape recognition, if we tried to slip them aboard. Possibly, they could have, earlier in the day, but not with everyone else aboard, and the Captain prowling his quarterdeck. He would be watching like an eagle perched atop the deck of his ship. And the man was nobody’s fool. He knew what an ‘Eigenfunction’ was.

It takes an intellect of high magnitude to give the test, as well as to pass it. Our only hope, as I had intuited, was to somehow get down the face of the broken rock cliff at the cemetery. All the contingencies would have to be accommodating. If, for example, we could get aboard the Zodiac. If, for example, the Zodiac was even there, then Filipe could take us to the far side of the ship, while it made ready to embark. With the captain’s attention diverted for departure, we could get inside the ship through the other door, which was seldom used, on the starboard side. The “ifs” had the upper hand.

Dutch squinted with skepticism, once I was done. His look of doubt did nothing for my already shaky sense of well-being. I was counting on Filipe an awful lot. I was banking on the captain not to have ordered the Zodiac aboard, so it was still lowered and ready to go. I was betting on no one alerting the Germans to our presence, once we got aboard. Worst of all, I was also gambling on Kessler being unaware of the whole thing. Our survival was a long shot.

Naturally, Kessler would be apprised that both Hathoot and I were missing. He would not take that lightly. As much as he seemed to despise me he still regarded me as one of his charges. I had no idea of his real relationship with the Lebanese. I returned to my position behind the drivers, as the Tundra Cat slowed.

I gave Hathoot a quick sketch of my plan. Surprisingly, he liked it. I even saw a twinkle in his drug-modified eyes. I leaned in close, so the boy could not hear me.

“If I don’t make it aboard, then my control at the Agency is named Webb. They will come to you. Tell them that the Russian kid gets a free pass. They’ll take care of the O’Donelly boy."

He turned his head to look at the rest of our messy remnant.

I tilted my head back, with a growing smile.

“You get the gold, of course.”