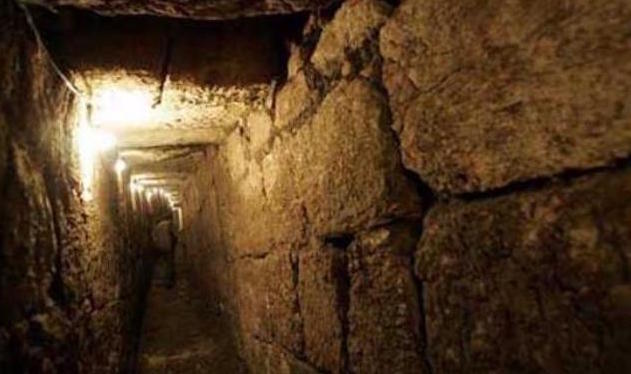 Kasinski and his assistant preceded me through the pipe. Our direction seemed up, although from deep underground it was hard to tell. The cool air bit into my torso, now uncovered by the cashmere coat. I’d spent five thousand dollars of Agency money on that coat, which I had so casually handed over to the boy. I intended to extract a lot more than five thousand dollars from the Commissar, given the opportunity.

I was accustomed to jailers around the world. Whatever the country, they were not much different from one another. They selected the job because they had a penchant for controlling others. They also were usually mean-spirited people who blamed their mean-spiritedness on the prisoners they handled. Kasinski had just seemed different above ground. Down in the fetid misery of the underground cesspool of a gulag, he was in his element, fully exhibiting his true character.

We came to another recessed area. This one only had one door set into the curvature of the pipe’s cutaway. Igor’s assistant jerked up on a steel lever, then pulled the large heavy door back. He stepped aside. Kasinski gestured for me to enter, but I demurred. I was not going into any more dark cells, no matter who might be inside. The Commissar spoke roughly to the assistant, who promptly hit an external light switch. I peered in. A man lay across a larger bench than the boy’s. The cell was also much larger.

Kasinski spoke in Russian again. I heard a ratcheting, and then watched thin chains snake across the floor and rise up to the prisoner. They kept rising until the prisoner dangled by cuffs welded around his wrists. I moved deftly to avoid being struck by his swinging body, as it centered itself just above the filthy floor.

“This is the famous dissident from Moscow. Alexi Demetrius. I introduce you.”

The Commissar laughed as he poked the prisoner’s chin around. He stared back into mine. His look chilled me even more than the temperature of the place. I bent very slightly towards him. He blinked back. We had communicated in that small series of seconds. I pitied him and sided with him. I felt him read that message. Quite possibly, it was the only thing I would be able to do for him.

“Look,” Kasinski said, his voice conveying pridefulness, “we have carefully broken his legs in three places. When we re-set them, we made sure to set them at angles.” I looked down. The man’s legs were mangled pieces of mis-shaped spaghetti. Dirty, bloody spaghetti. “He will never use those for walking again. We do not even need a lock. He is ours for life, although I fear that he has little of that left.”

I did not know what we were doing there. Was I being introduced to some negotiation process? I could not gauge it. I knew that I had no capability, whatever, to transport a dying prisoner out of Northern Russia.

Kasinski grabbed the prisoner’s swinging chin with one beefy hand. “Tell us Alexi, do you have much entertainment left in you? We are bored. We need to hear your screams and cries of protest! Where has your dissidence gone?”

The Russian amused himself demonically.

I could not stay in the cell any longer. I hated torture. I hated it in prison, out of prison, on men, women or children. I hated it on television shows. I even hated it when used upon animals or insects. I was known in the Agency for that feature of my makeup. No one ever discussed it with me. Ever. I had had an incident in Thailand once. Because of it, I was fired, for the first time, by the CIA.

I had come upon a scene where we had imprisoned some brigands. They had been bad men. While I was away, two of my own people had taken it upon themselves to start a fire and begin roasting the men alive. They were enjoying their cruelty when I came out of the brush. Indeed, they had laughed just like Kasinski had laughed, their voices filled with power and perversity.

In Thailand, I had not asked anything of either man. I had simply taken out my nine millimeter and shot them on the spot. It was a reflex action. I was not fully aware of the shootings until the rounds were already delivered. They had not died, however. And there had been hell to pay. I would be fired twice more, but that was later on, for different offenses.

“I believe I’m done here,” I said, then fled the cell, into the giant sewer pipe and back toward the white room.

I hoped that Benito was done with losing her dinner.

“Wait,” Kasinski yelled at my departing back. I froze.

I was in that man’s facility. I fought to control my facial expression before confronting him.

“I sense you do not approve,” he said.

I shrugged as if cruelty did not affect me one way or the other.

“You do not understand how destructive these kinds of people are to my country,” Kasinski yelled

I feigned agreement with his excuses.

“You know, my friend,” I replied smoothly, taking the Russian by the arm, “I have been down here too long. It is oppressive. I need a drink. I’m sure you understand.”

I forced a laugh after I finished dissembling, I then ushered the Commissar towards the invitingly open door of white light just ahead. With the stench, out of my nostrils and with the gate to Hell shut, I looked around for something to clean my shoes with. There was nothing in the room, not even the Cruise Director. I guessed that she had found her way back upstairs, or had been helped by one of the assistants.

“Do not worry about the dirt,” Kasinski said, “prisoners are brought up to clean at all times of the day or night here, as I require. Your shoes will need looking after.”

After that statement, however, he grew silent, as if contemplating something serious.

He spoke, at last. “We were going to talk tomorrow. But there is a delicate problem to consider first.”

I listened, my forehead creased with concern.

He went on. “I need another prisoner, to replace the American. I mean, if we are able to come to an agreement tomorrow. It would be best of all if the replacement prisoner were an American, too. Our budget is heavily influenced by our keeping important foreign nationals here.”

I quaked under his words.

The man was asking me to pull some other poor soul from among the passengers or crew and hand him over. Over to the barbarism, I had just witnessed. My face reddened on its own until a novel idea came to mind. My righteous anger departed like a waft of warm air, replaced by a very cold thought. The Commissar’s needs might not be so far out of order.

“I’ll look into it,” came out of me blandly.

I had, it seemed, lost the ability to transmit much in the way of emotion.

Kasinski caught on. We were co-conspirators again.

“Let us return to the brightness of the real world,” he said, opening the door that led to the stairs.” Maybe we should make the results of the chess game a part of the deal?”

Once on the stairs, and on my way up to the study, I warmed to his suggestion. I didn’t think I could beat the Russian champion Karpov, but I could give him one hell of a game. It was unlikely that the Commissar could beat me at chess, but I would certainly not gamble the boy’s life on the possibility, however slim it might be. The mission had acquired a new urgency. The boy was not going to survive too much longer under the Commissar’s inhumane treatment. Kasinski and I arrived back in the study, leaving chunks of the underworld spinning from the soles and sides of our shoes. The room had become a mess, and the odor had followed us up, as well. Kessler sat across the chessboard from Benito. She turned to appraise me. I saw naked fear, cloaked, in her eyes. I nodded firmly at her, but she wanted her isolation.

“Commissar, I recommend we conclude our game in the morning,” I said since it appeared that Benito needed to depart as quickly as possible.

I was in bad need of a long hot shower myself. My shoulders were square and my back straight, but I was suffering fatigue from a long stretch of acting and posturing. Emotionally, I had to true-up soon, or my behavior could turn erratic. Kasinski was accommodating.

“Yes, yes, that will be fine. We will breakfast here, instead of lunch?”

I preferred to stick to the original timing as closely as possible. I wanted everything that was going to be concluded between us to be done and then the ship to sail. The coincidence of those events was vital to success.

“As planned,” I replied back to the man. “There are details...” and I let the sentence trail away.

The Commissar nodded his head vigorously, finally catching on to the last element he had added to our on-going negotiations.

“I like your style, Indy,” he said, jovially, which I took to be an insult.

I fought to keep my real feelings about the man deeply buried.

Kessler accompanied us to the Tundra Cat. I was surprised when he climbed aboard. Kessler had probably ridden out earlier aboard the same vehicle. How many of

the tracked things did the compound have laying about? I didn’t know, but I had a feeling that the place was operating on a shoestring. Benito and I followed Kessler aboard. We all waved at Kasinski, as if we were departing from a fond old uncle. The diesel built to its normal wailing scream. Once more, we flew across the skin of the tundra.

The harsh cold air did not chill me. It actually freshened me. I inhaled and exhaled deeply, taking the clear cold air in, then letting it slowly out. Benito sat in the row behind the driver. Kessler and I sat shoulder-to-shoulder in the back of the beast. He tilted his head towards mine.

“The cruise director appears to have a light stomach for such things,” he grinned, pointing at the back of Benito’s head.

I averted my face, with my head inches from his.

“You have never gone down there, Captain, have you?”

Kessler’s levity quickly subsided. I watched him decide whether he was going to lie about it or not.

“Nein,” he bit off, turning his face to stare straight ahead.

I scanned the flowing fields of tundra flowers, so subtle and beautiful. I speculated about the predictability of aggressively macho men. They had no clue that their macho behavior cloaked the weakness or lack of experience, they so badly sought to conceal. And they had no insight into courage and strength. You gained no courage, nor exhibited any, from causing hurt or pain. You obtained it from taking hurt and pain. You gained strength from endurance, not action. None of those truths were really teachable. You could not ‘make believe’ your way through life.