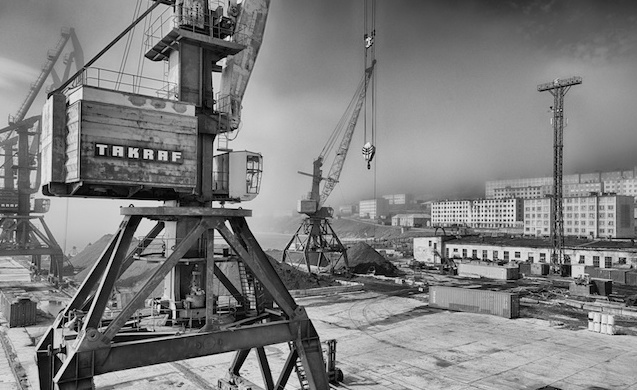 “Sarda” was the name painted on the side of a large white building not far from the dock. We walked to the site, always on broken or badly cracked concrete. When we had arisen that morning, I had checked the dockside from my porthole. Four huge cranes had surprised me. They were not the ordinary dock variety, but the huge monsters I was more accustomed to seeing in the harbors of Singapore or Denmark. Past the cranes, “Sarda” was visible in red letters high up on the wall of the old building. There was only one door, which was ajar as we approached.

Don pushed the door open. All four of us entered what was obviously a former warehouse. There were no windows at all. It was one huge room, laid out with many round tables and chairs. The bar consisted of stacked shipping pallets. Behind The Pallet Bar was a long mirror, cracked in a dozen places.

I brushed my hand over a table. It came away clean. I was doubly impressed when Dutch threw a light switch, and it worked, although the light produced by hanging ceiling fixtures was not bright, it would do. Immediately, I dispatched Don and Dutch to the ship for cases of alcohol. It was likely that word was already flying through the community that Sarda’s was about to re-open, at least for as long as the expedition ship was in. Don had voiced his concern about getting into the bar storage area, as Marlys was still occupied, doing whatever she was doing, with Khromov at the museum.

“Take this,” Borman said, tossing Don a key ring. “It’s got a master for that area. I don’t know which one. Try them all.”

Don caught the keys, and then led Dutch out. He had an expression of concern on his face. I didn’t trust Borman, and I also had no compunction about shooting him if necessary. I did entertain, for just a moment, whether the suppressor would be quiet enough. Provideniya was a dead zone. Any sound reverberated between, and around, its ugly buildings. If I had to shoot someone, indoors was preferable.

It took almost an hour to fully brief Borman about everything that had happened, and what needed to be done. I detailed the find on Aguiak Island. During that part of my lecture, Borman took out his supply of gold nuggets to roll around in his hand like Captain Queeg in The Caine Mutiny.

“I’ve never heard of this quality coming directly from the ground. I mean anywhere,” he explained. “It’s almost like it was planted there. Look at this,” he held up one of the purest of the gold chunks. “I’d say that’s almost twenty-four carat, right there.”

I traversed the enormity of the find with him again. I also went into some considerable detail in describing the vein. The gold was real. I had spent enough time in digs around the world to recognize ‘in situ’ settings. With only picks and shovels, more than a ton of the rich ore could be taken out of there in days, or less. But I only wanted to assure Borman that there was no trickery, and that we had, as a goal, the acquisition of as much of the material as we could get. At a later date, of course.

Don and Dutch returned, each carrying a case of liquor. They set up shop behind the bar, while Borman and I continued our crucial discussion.

“You must not trust Günter,” Borman warned, when I had finished. He eyed the row of shot glasses Dutch had found, and lined up, atop the rough wood of the bar’s surface.

“Why not?” I asked the First Mate, directly.

Borman took out a cigar, and then lit it slowly. “The stiff-necked boy is spineless. He’s the captain’s toady. He tells him everything.”

I immediately thought of the CD player. Someone with authority and keys had had access to that recording device. Günter was attached to Marlys, but how powerful that attachment was, was anybody’s guess. I trusted Don, and I relied on everyone else’s self-interest. Usually, I was right about the self-interest.

Marlys stepped through the door. I met her, as a portly Russian wearing a cheap off-the-rack suit followed her in. There was an even larger Russian, this time a woman, who shadowed him. Marlys looked unruffled. She gestured that I should hold out my hand to the man I believed to be the professor. I liked him even before we shook hands. His smile was huge, with great shovel-sized teeth showing through.

“You would be the anthropologist, I presume?” he said, gripping my hand in iron. I did not wince, but it was hard not to. “This is my assistant, Dora,” he gave a perfunctory jerk of his shoulder, indicating the woman’s presence behind him.

The large woman smiled, very shyly. “She has the child you’ll be taking.”

Marlys spoke next. “The Professor says that the arrangements you’ve asked for have all been made. He has done his part. Now you must take the woman’s child with you when you leave. He has no possibility of any kind of real survival or future here.”

“Thank you,” Khromov responded, holding out his hand again.

Instead of taking it, I clapped him on the shoulder and laughed.

“Great. Sounds great. Now let me tell you what you have to do with the snuff boxes.”

I waved to Don, behind the bar. He came out with a bottle of Johnny Walker Red, and a handful of shot glasses. The professor and Dora, his assistant, sat at Marlys’ table, as if commanded. Don plunked a shot glass in front of each of us, then poured around. I held mine up to make a toast, but the Russians did not wait, instantly downing theirs, bottoms-up, then hitting the table hard when they put the glasses down. I put my own drink down, without drinking. Control was spinning away from me once more. How could I reassert it?

“Hathoot has to be convinced to come ashore. What can you do to help us?” I said to the Russian.

I had not asked Don if he had mentioned Hathoot’s name, but it was too late to get his advice. Khromov downed a second shot, and then became expansive.

“I shall see to it, as soon as I get to the museum. Whatever you need, I will do. I have three boxes I will send to the ship. If they do not draw him out, then I do not know the man at all,” he assured me, as he licked his lips. “I will guarantee you that he is here in the morning. We can meet at Sarda’s, if you would be so kind as to open it tomorrow.”

The quiet of Sarda’s, and of Providenya itself, was broken. A grinding nightmare could be heard, moving closer to the building. The building itself quivered a little, as Khromov and Dora merely waited for their third shot of anesthesia.

“What is that sound?” I quizzed everyone. 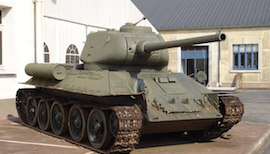 Marlys was frozen in place, I saw. Only Dutch and Don, up at the bar, seemed unconcerned.

At hearing his words, I got up from the table. I went through the door. When I saw nothing, I went around to the Southern corner of the building. A tank sat idling next to a wall. Its long gun barrel pointed directly at the ship, but the crew was scrambling out of it, one after another. They were nearly running, as they went right by me. It was as if I wasn’t there.

I looked at the tank, and then at the Lindy, then made my way back to the bar. I didn’t like the implied threat of the tank positioned there, yet I understood fully that the word was out about Sarda’s opening.

The tankers’ rush opened floodgates. People appeared from everywhere. In minutes, the bar was shoulder-to-shoulder. Dutch and Dan poured ceaselessly. Several tankers congregated around Marlys, by far the most voluptuous woman in all of Providenya, where beauty was seemingly illegal. She had an aura that did not draw men inside a certain radius. It was like a circle was painted on the floor five feet from her. She had uncrossed her legs, I noted.  When I sat down, Marlys leaned very close to me.

“Do you want me to sleep with Günter?” she asked. Her eyes were limitless pools.

I could get nothing back from them. Our eyes remain locked, until I shook my head.

I didn’t understand her question, not at first. Does she want me to want her to sleep with Günter, or not, I debated. My head began to hurt, as if I had actually been drinking the Johnny Walker Red myself. I engaged Khromov.

“What’s the child’s name, and how old is he?” I asked, bringing the mission back to center stage.

I breathed a sigh of relief. Minor relief. At least he was not a real child, for legal purposes. There would not be the difficulties, which would otherwise ensue if the child were a minor. Eighteen was an adult, almost anywhere, even in Russia.

“I’ll have him come to the bar in the morning?”

My expression and shrug back toward the woman answered her question.

“What’s one more?” I persuaded myself.

I noted that passengers were beginning to fill the place. Sarda’s had become the single most popular spot in Provideniya, and in only a matter of hours. I finally leaned back to Marlys.

“What’s the booze supply like aboard the Lindy?” I inquired. She was all business in her response.

“It’s a hundred and fifty dollars a case, which will be charged to your account. We have seventy-one cases of everything aboard, not counting open bottles behind the bar.”

I whistled at her answer. The World Discoverer was well stocked. We wouldn’t be running out of booze in Provideniya, or anywhere else, anytime soon. Khromov had three shot glasses, all empty, in front of him, I tallied. He waved Don over again.

“Commissar Kasinski’s dangerous,” he warned, his voice not slurred in the slightest by his heavy drinking. “He knows something’s up. And he’s a devious bastard. Heartless. He tortures those people out there.”

Khromov waved toward the South, where the gulag was located.

“He’s got that hot shot activist from Moscow there. He’s got to show everyone that he’s broken him.”

I didn’t like hearing this news. The situation at the Gulag was becoming murkier by the moment. A common problem with the Agency’s analysis side is human intelligence. Seldom does an agent go operational with an accurate description of the true situation. I was painfully aware that I had a 32 automatic in my pocket, while not twenty feet away was a hundred and twenty-five-millimeter tank gun. I had minimal intelligence, questionable assistance and was massively outgunned, with what could only be generously described as an impossible goal.