The hall outside the St. Norbert Chemistry Department classroom door saw a lot of traffic. The dark, near ebony, wood and solid stone floor that ran the length of the narrow passage exuded age and class. Student’s passing all did so in silence, carrying piles of books, making their way from one classroom in the science complex to another. The door of my intense interest had only one class taught inside, for two hours twice a week. The remainder of the week the revered space inside was left vacant to honor Gordon Vandervort, famed physicist and chemist who had been so quietly important in winning World War II. Doctor Vandervort had worked on the Manhattan project. What he’d done for the development of the A-Bomb nobody knew, although everyone wondered about it, especially students like myself, aspiring to grow up and be just like him without ever saying so to anyone. I was a rebel. I wore “T” shirts in Northern Wisconsin winter, spoke out with emotional opinion in every class I attended and generally made sure everyone noticed my existence.

I was waiting, laying back at the end of the hallway, because of my brother. He was a junior living in the Junior dorm and I was a sophomore relegated to 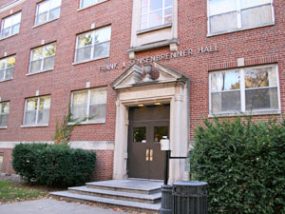 Sensenbrenner Hall across the road. We barely spoke because of my being black-balled by the college’s fraternities, my rather outgoing behavior and the fact that his friends were juniors like him, while I was a lower underclassman. My brother was smart. I was smart, but I was never discussed openly as being anything close to my brother. But I knew I could match him step for step if it was not for my superior personality holding me back. Mike was a different kind of thinker than I was and I knew it but he did not have my gifted memory. Both of us had tested to get into Doctor Vandervort’s class. Only forty kids made it above the line. My brother had been number three while I slid in under the bar at thirty-nine, but I was in.

The mid-term was going to establish that I could beat his grade head-to-head for the first time in our history. My brother did well at school and I did not, comparatively, a fact that my family never let me forget. I went to work on Vandervort’s chemistry class like I had never done before. For the mid-term, the class only had two tests for the whole semester, a mid-term and a final, I used my great memory. I memorized two-hundred and forty pages of the book. Truly memorized. Word for word. There was no way my brother could have beaten me on the mid-term because I had it all in my head. Vandervort was a horrible lecturer. He droned on during every class, reading from the book. The answers were all in the book, which was in my head. The test had been a multiple-choice affair with three hundred questions. I knew I’d beaten my brother before the test period was over because he only stayed in the room for a bit less than hour before giving up and handing in his attempt. I stayed the full two hours and fifteen minutes, pouring over every question several times.

I waited in the hallway until there were no students, and certainly none looking at the piece of white paper taped to the classroom door. Our mid-term grades. I approached the door with nervous trepidation. I saw my name, typed at the top of the list ten feet before I arrived at the door. But it wasn’t my name. It was my brother’s name. I stood in disbelief. The two of us were at the top of the list but the grades determined the order. My brother had received an unbelievable and nearly impossible one hundred. My performance, at ninety-four, was second.

I stared, my mouth hanging open. And then I swore under my breath. It all came rushing down on me. I walked away in despair, finally understanding that my brother was an “A” student and I was not nor would I ever be allowed to be. Ninety-four was still and A, but it wasn’t the same. It was always the same through our history. I did all the work and he got all the credit. I didn’t hate him but I hated the injustice of a totally unfair system. Once out in the cold winter air, wearing only my jeans and “T” shirt, I sobered up from my anger. I was not going to take it this time. I was going to go right at the system head on. I knew where Vandervort’s office was in the other wing of the science building. I walked to that end, freezing but resolved in my decision to confront the famous man.

All the professors had small offices, with one secretary out front, sitting at a solitary desk. I asked to see Vandervort. She asked me if I had an appointment.
I lied and said yes, letting my anger get the better of my good sense. She didn’t check with him.

“Okay,” she said, in a tone that seemed to indicate that I’d be anything but okay in going to see him. I ignored her and walked down the hall where she’d pointed.

The letters painted on his glass windowed door were slightly intimidating for their simplicity. All the other doors had titles, but not his. Black letters, painted like in some old private detective movie, said “Vandervort.” That was all. I was so nervous and angry at the same time that I didn’t even knock. I stepped in, closing the door behind me.

“Ah,” the portly man with big horn-rimmed glasses said. “Little Strauss. Why do I have the pleasure of your company?”

I was taken aback. For one thing, my brother was the same height as me (almost) but I’d been called “Little Strauss” by teachers throughout all of my schooling and here it was again. On top of that, I wasn’t ready for his jocular smile or friendly tone. In class the man demonstrated absolutely no personality at all, just reading at the lectern and leaving without questions afterward.

“The test,” I began, uncertainly.

“Yes, the mid-term,” Vandervort chuckled. “You did very well, indeed.”

“No, I’m not here about me,” I gushed out, standing in front his cluttered desk. “I’m here about my brother.”

“Interesting?” I asked. “Interesting? He didn’t finish the test. He was the first one to leave. He sat near me. I saw his answering sheet. He didn’t even fill most of it in. And you gave him a hundred.”

“Yes, yes, so I did. Let me see here,” Vandervort brought a stack of papers up from the floor from behind his desk. He rummaged through the stack. “Here it is. Your brother’s paper. Yes, you’re correct. He didn’t answer the questions.” Vandervort held out the mid-term answering sheet to me.

I took the stapled three-page document into my hands. I knew I had him. The evidence was right in my hands. I smiled, and stared into Vandervort’s eyes.
Vandervort read my expression, and then leaned back in his chair. “You might want to turn the answering sheets over. 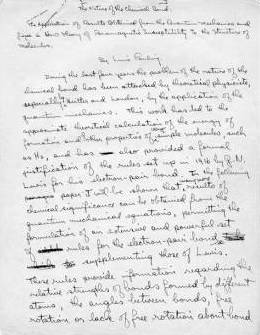 I frowned, before doing as he asked.
There were numbers, formulas and equations written all over the back of the pages. I concentrated. If given enough time I knew I could figure the numbers out but at first glance they seemed like so much gibberish.

“He didn’t answer the questions. On the back of the test he wrote his own chemical theory and then gave the mathematical proofs for his hypothesis. I’m still checking his work but I think he’s on to something. What do you think?”

In the lengthy silence that followed, Vandervort leaned forward, picked up a pipe from his desk, tamped some tobacco down in it’s bowl and lit it. Then he leaned back again and stared at me.

“What grade would you give him?”

There was nothing to be said. I slowly placed the answering sheets down on the edge of his desk and walked out of his office. The secretary saw my color and expression as I passed and shrugged with a smile. I left the building and went out into the cold of a Northern Wisconsin winter where it was warmer.