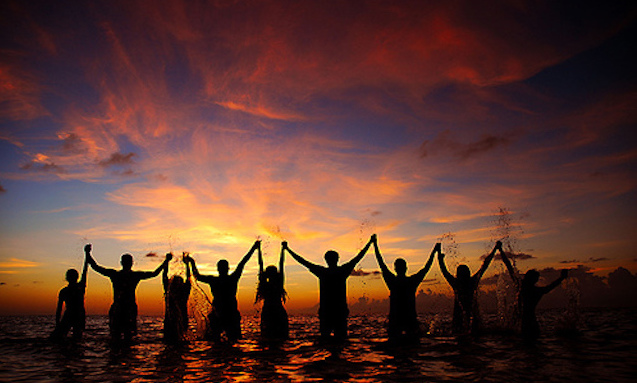 The totality of coming together as a culture only happens very sporadically and with outside forces driving differential elements together like the fuzing of atoms. From the fuzing of atoms come a great release of energy or another form of matter entirely. What is happening in the American culture today is a form of this fusion, and it isn't a physical/social reaction that comes without pain. People, societies, tribes and cultures do not want to get together. They function with independent leaders and very nepotistical driven higher management.

Today, however, the revelations driven by technology, particularly in the communications sector, are revealing too much of the great secrecy needed for nepotistical functional groups to succeed over other slightly less successful groups. Homogeneity is the only eventual course left open. The old 'hang together or hang separately' phrase comes home to roost in a definitive way. However, the coming together of such diversity does not appear to those experiencing its inner workings as coming together at all. By knowing more we come together more. By knowing about one another we accommodate one another more. We just don't seem to immediately accept that. By understanding more we can deny less of what we all know, even though we fight this tendency. There is a whole flat earth belief system newly arisen to fight this coming homogeneity.

There is renewed interest in dictatorships to deny the fact that we will one day be one world, one culture and one huge society. It is only a matter of time and the necessary joining of forces the universe will eventually require of us in order for us to be either destroyed by it or become its master. You are one with your neighbor, but you don't accept that yet. You are one with the blacks, whites, yellows and every other race, even though down deep you don't want to be. I am not writing this article about acceptance. I am writing it about the vision to see what is coming next and it is going to be something, indeed. Astrology has it completely and utterly backwards. We are not controlled by the movement of the planets or stars. We control those things although our influence upon them remains slight as of yet...as our eventuality grows, and grows and grows. Neither Trump, nor Putin, nor the Clintons of this world truly matter in this grand movement into the future.

Only we matter. You matter.