The 1965 pledge class of the ADG Fraternity at St. Norbert College rejected a young man because of a disagreement the fraternity had regarding a pyramid scheme it was conducting all over the campus. In order to prove his point, that the fraternity was doing something federally illegal in using U.S. Savings Bonds as pyramid deposits, both the fraternity and the young pledge decided to call the FBI anonymously. When it was discovered the the pledge was correct but the FBI wanted to know who was calling, the fraternity officers became afraid and the pledge was barred from joining not only their fraternity but all fraternities on campus.

entirely, and the pledge, being of rather diminutive size,  began to be physically abused by small groups of Frat Boys, made up of their jock members. The pledge was beaten several times but could not quit the college because he had no money and he could not return home having failed as a college student, as he was to be the family’s first member to ever graduate. The ex-pledge worked in the college kitchen as a baker so he had to get up at four every morning. The fraternity members of ADG were mostly well off boys whose parents had paid for their educations. They drove two seat sports cars, for the most part, which they had to park outside the fraternity house because there were no auto garages on campus.

One morning the ex-pledge decided that there was something he could do about his situation. He got up at four, went out into the winter cold and bent off the radio aerials of all the sports cars in the school parking lots and around the fraternity house. Nothing happened, although the beatings stopped for about a week. At the end of the week the ex-pledge was caught coming out of a class and assaulted by two male students from the football team. The next morning, recovering and on his way to work, the ex-pledge went around and bent off all the newly repaired radio aerials on the cars again. It took two days for the heads of the fraternity to come to his dorm room and knock. They knocked politely and asked to enter. The ex-pledge let them in. The head of the fraternity said that there were there because of the aerials. They loved their cars and had no place else to park, and none of them could get up every morning at four a.m. The fraternity wanted to declare a truce. They would leave the ex-pledge alone and he could stay at the college in exchange for not bending off the aerials of their cars. A truce was declared. The fraternity members of all the campus fraternities moved on although they never forgot or socially forgave the ex-pledge his transgressions. 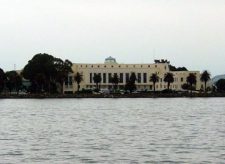 Four years went by. The ex-pledge became an officer in the Marine Corps, went to Vietnam and had a bad tour. When he got out of the hospital up in San Francisco he was considered ‘ambulatory’ but not able to fully serve. Awaiting a transfer to Camp Pendleton to stand by for a physical discharge under honorable conditions (he’d gotten a lot medals for combat) he was ordered to serve in a Marine Corps adjudication unit set up in a building on a small island off a San Francisco Bridge called Treasure Island. He was ordered to go through four hundred backed up household moving claims and given two weeks to get the job done. Each file was over an inch thick. His Commanding Officer turned out to be the head of ADG Fraternity from back at the college. The other Marine did not recognize his former pledge. He berated the wounded Marine in front of the enlisted staff. Not being able to do the job but not wanting to disobey orders, the wounded ex-pledge came in the following morning and approved all of the claims unilaterally, as was his authority, instead of going through each one to see if the claim had merit.

The wounded ex-pledge remained standing in the wind, the waves breaking on the rocks below and the sky filled with scudding white clouds. Slowly, he drew down his right hand he’d held up behind his back under his Marine Officer Class A blouse. The hand gripped his .45 Colt automatic. The wounded Marine Officer re-engaged the safety, walked back to his own old Pontiac and tossed the gun onto the passenger seat. He took one last look around the little idyllic island under the bridge and smiled at how good it was to be back home.

Most all of my short stories and novels are based on real life experiences….