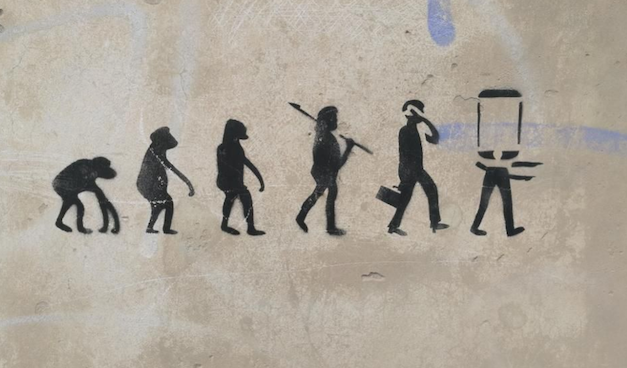 The Devolving of Humanity – Why?

What happened? What took place across our interlocked and pervasively communicated land that caused our culture to change from one of a foundationally effective society of idealism, hope and a solid core belief in the ‘fact’ that things would always continue to get better for ourselves and the forthcoming generations to a nation where the over-riding pursuit of the majority of the citizenry is one of self-aggrandizement, personal gain, and mutual distrust? What happened?

Communication happened. Vastly interlocked, filtered and controlled communication has been subtly but grandly extended like a huge dampening net over the entire country since the end of World War II. Prior to that conflict, slow growth in national communication took place, as first the telegraph and then radio allowed people to share commentary, but more importantly be told what was happening around them and in more distant parts of their region, state, nation, and even the world. These early advances were marked by a form of naked ‘honesty’ that became accepted as the truth of the times. And those early advances, communication delivered without much-concentrated thought about either social control or manipulation, set the public up for what was to come with much more pervasive communications inventions.

Television happened. It happened as most tremendous advances happened. By accident. The concept and then application of this hugely effective means of reaching almost everyone in the world at any given time was not well understood for many years. By the sixties, however, and as a direct result of social unrest of the times, the enormity of television as a tool to actually control and manipulate the belief systems and the resultant behavior generated by those systems became apparent to some of the more aware elements of our social order. Lying under the guise of psychological operations, the good of the nation and the security of us all began to penetrate almost every aspect of television broadcasting. At the same time, with a future of ultimate social control staring at these early luminaries in the face, it became evident that whoever controlled the outlets for this new developing medium would control first America and then the world.

No grander concept had ever been contemplated with the expectation of any success before. And no grander concept has ever been applied as effectively and ruthlessly as this one. Today’s public, from America to Egypt, from Britain to Sudan and even on into the poorest of third world countries is controlled by the deliberate filtration system purchased and set into place by only a very few corporations and men. What was not expected by the luminaries, who were able to have the vision to pounce upon this new medium and so coldly and aggressively control and manage it, was how the population of the world would silently come to understand what had happened and then powerlessly consider and react to it. Everyone knows that the ‘news’ of today is mostly hokum, spoon-fed to an otherwise ignorant public (by careful deliberation) and provided to influence almost every aspect of present and future life on the planet. This knowledge, along with an in-depth understanding of the futile nature of opposing it, has brought about a great and grand stagnation of invention, originality, advancement, and results. The public has been fooled, and in the course of being fooled, has come to understand what happened and is continuing to happen. Selfishness, callous disregard for others, protectiveness and inward thinking have been the result, as our world waits.

There has been a leveling of almost all civilized advancement throughout the developed world for the last fifteen years. We live on this plateau of longing hope, a neutered landscape of dreams held in abeyance, awaiting a time of release from our enforced discontent. We know but remain powerless to do. We understand but remain caught in a web of fearful silence. We wait, knowing that the planet turns endlessly, piteously, but with change as a fundamental part of its nature. We live in unspoken reserved hope, protecting what we have, being seen as uncaring and only interested in our own survival, but with a core of warm wonderful honor waiting to once again radiate outward and allow for the next stage of this amazing species of Homo Sapiens to spring forth.

The Coronavirus can’t kill this wonder of a human condition that has assumed control of an entire planet. Only the human species can kill us. Fight back against this plague coming out of the night and never, ever, ever, quit.