I came back from Vietnam on a hard white gurney, flown in by one of those planes they called Starlifters at the time. Those wounded of us in that fuselage had all been pinned up in plastic sacks to the walls and the center divider, like the drugged and damaged larva of some huge insect phylum. 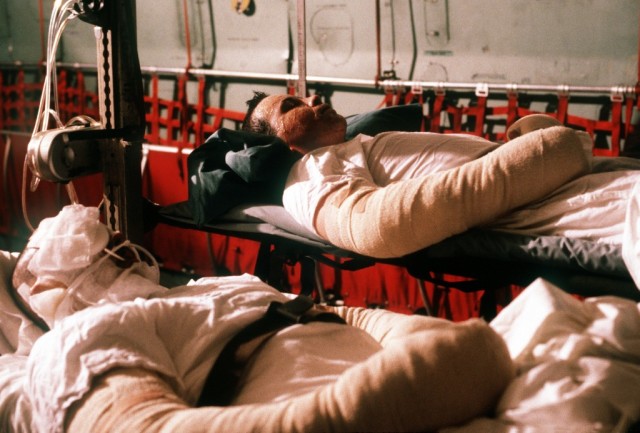 Now. Phoenix, Arizona.  The airport here.  In one of those little bar kind of restaurants they have out near the spoke-ends. Nameless.  Marginal food. But a place to sit and not be among all the fidgeting, staring passengers on the black faux-leather seats near the gate.

I don’t have Post Traumatic Stress Disorder (PTSD), even though I go to group every week at the VA.  I am not suicidal, and they know that. No, I don’t really want to be alive anymore, but that is different.  Suicidal is weak, and I’m not weak.  I’m here.  And I’m okay.  I don’t think about Vietnam much now, or my lost boys, or the other people who died because I was there.  But I am hyper-vigilant, the psychologist says.

I notice things. I notice a lot of things. The license plate of the car driving behind mine. My mind converts the backward image automatically. The people around me. Whether they have noticed me.  Whether I have seen them before. What they are wearing. What they are buying. It never stops. I don’t want to be afraid of them, so I want to have never seen any of them before. I had great courage once.  People think I do now.  But I don’t.

I don’t share my fear. But there’s also a physical manifestation which is hard to miss. I shake a little.  When that happens, I move. Like Michael J. Fox with his problem. You don’t shake if you move around a bit. He knows that.

My small table is outside the eating facility but inside a short metal fence. My back is against the wall. That’s automatic. I toy with my bad Buffalo 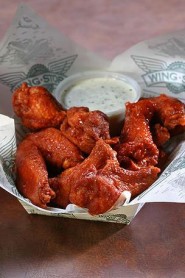 wings, but really watch what is going on around me. Then I’m surprised.

A GI comes through the outside door.  He’s dressed out in full Iraq mufti. The new desert kit, with the cool buff boots and velcro patches. I don’t notice what’s on the patches because I was a Marine.  I don’t care.  He’s Army.  He’s okay, but he’s Army.

He sits down. He has nothing with him.  Not even a ditty bag. Unusual.  I note that.  He looks too good, and with nothing.  He could be a phony, just looking to make believe for awhile. He sits at the next table.  His back is against the wall too. He watches the people, like me, but does not look at me, or I at him.  I just take him in from the side.  He orders. The waiter comes and goes away.

Then the G.I. starts singing aloud.

“Daisy, daisy, ….give me your answer do….I’m half crazy….all for the love of you…”   His voice is soft in the singing.  Very soft.  The words come out one at a time, with spaces.

I remember where I first heard the song.  2001 A Space Odyssey.  Kubrick. The GI is singing, just like the computer in the movie.  The song plays, I recall, as Keir Dullea gets back inside the space ship and slowly removes the brain parts of Hal, the computer gone bad.  The more parts he removes, the slower the computer sings the song.  Like the GI.  I don’t turn, but I am struck hard.

Then, as he is singing, his knees start a rapid drumming up and down. He takes both hands and pushes and holds his legs back down, but continues to sing. He’s real. And he’s just come back. From over there.

“What am I going to do?” I whisper.  I cover my face with both hands. I breathe in deeply inward, and then out again.   I decide to help the G.I.  I get up and leave, dragging the roller behind me.

I take out a twenty from my money-clip and put it on my table.  I get up and wheel my roller back into the main bar, and then out the side to the main area, where people mill.  I move directly toward the restroom and into a stall.  I sit on the john with my clothes on.  I’m vaguely reminded of  the weird Senator Craig story, so I keep my feet well inside the stall.

“What am I going to do?” I whisper.  I cover my face with both hands. I breathe in deeply inward, and then out again.   I decide to help the G.I.  I get up and leave, dragging the roller behind me.

But the G.I.’s gone.  His food is on the table.  The waiter is standing looking around, wondering whether his client has run off.  I walk back along the outside of the metal fence.  I take out another twenty and motion to the man.  He frowns, looks at the uneaten food, but takes the twenty.  I move through the spoke to my gate and get on the flight.

I have a middle seat.  After take off I notice my seat-mates turning slightly to view me better.  I realize that I am very quietly singing.  That song. I stop immediately, take off my seat belt, and climb over the aisle passenger.

Just a little will make it all okay.