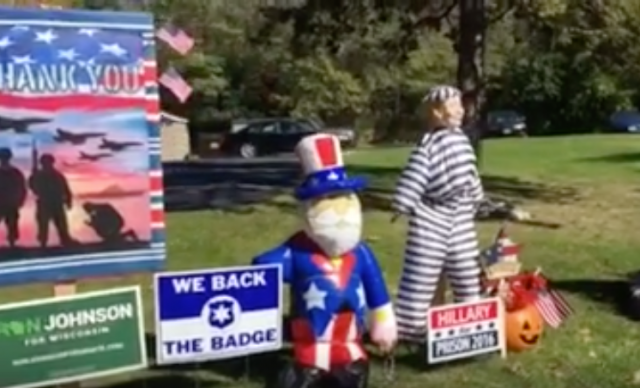 I did a short video on a Donald Trump display set up just north of town here in Lake Geneva.
I did not say it was a bad thing. They put up a paper mache effigy of Hillary in prison attire however, and some nasty stuff about her under it. I reflected in my voiceover that this was a sort of a “violent presentation.” And that caused a furor in the underbelly of the Trump supporting horde. If anybody supporting Trump now can be said to have an underbelly. It seems that the declarations made by Trump about women should stand on their own but many Trump supporters have no problem violating or beating women and there are actually some women who do not mind being violated and beaten.

Either that or Trump would now only have the Pope supporting him after an intense confessional session.

So, I remain contentious and confrontational out here on the Internet, which is odd, given that I am only writing that Trump is a low-life, spoiled and snotty leering old codger often mistaken for a scumbag shmuck.