Eruption at Mauna Loa, From The Wilderness 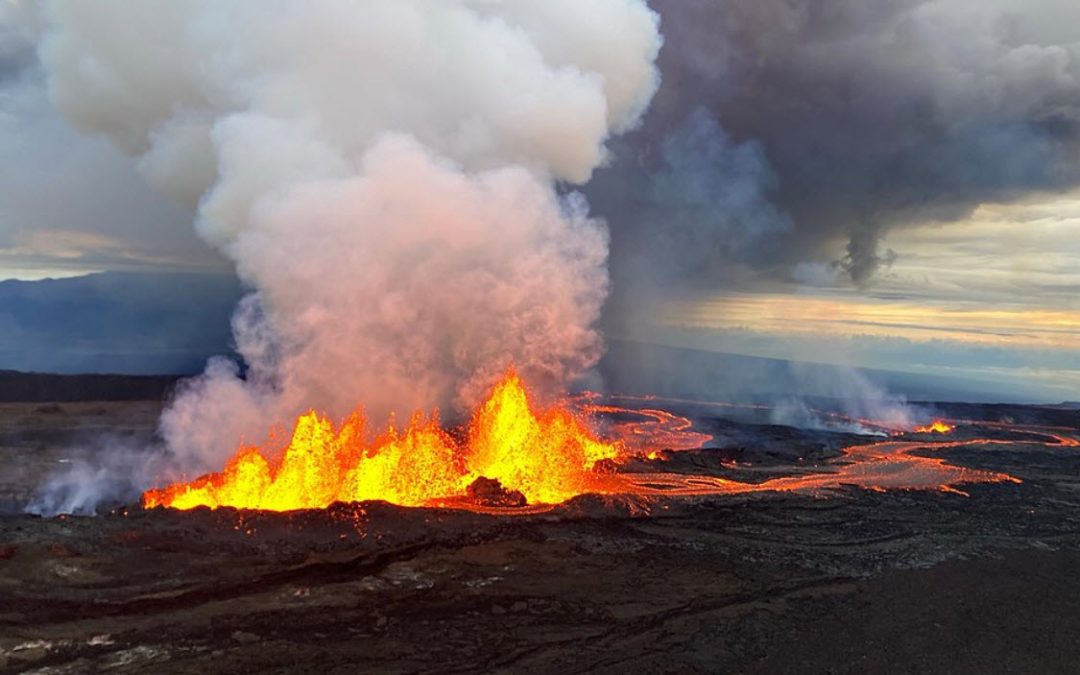 There is quiet risk in geologic events, although such events are seldom able to be predicted ahead of time.  There was little warning around the world when the earthquake that occurred along the seafloor just off of Indonesia struck, killing so many, nor was there when the Japanese earthquake created an even larger series of tsunami events a few years later.  Geologic events of potentially great magnitude are usually experienced rather than predicted (unless the predictions of follow-on events, like tsunami creation following large undersea earthquakes, are made but with only a few hours or minutes to prepare for their arrival).

What’s going on in Hawaii?  The largest volcano in the world is erupting again. It does that about every 38 years or so, and most of the eruptions are relatively minor when it comes to affecting the lives of the 186,000, or so, people living on that island.  The last huge eruption, going back into the eighteen hundreds, killed only a few hundred people, and threw a huge amount of the island’s land mass up in the air and then down into the sea.  The population of the island was only about seven or eight thousand souls.  The entire population of the Hawaiian Islands back when the last big Mauna Loa eruption took place was only 74,000, as opposed to the 1.5 million (add between 250,000 to half a million visiting tourists to that on any given day) currently.  If a 7.9 magnitude eruption took place today (like did back then), or sometime soon, you can imagine the damage and fatalities the islands would endure.

The danger.  Mauna Loa sits not far from the northwestern edge of the big island.  That 1800’s eruption created a twenty-foot tsunami from the shaking of the island alone, but that’s not the real danger.  The immediate risk to consider is if the northwestern slope was to slip into the ocean, sort of like the one side of Mount St. Helens did in Washington back in 1980.  The size of Mauna Loa is something else to consider.  The greatest volcanic landslide in Hawaiian history occurred about 1.5 million years ago when the Nuuanu slide happened on the north coast of the Koolau Mountains on Oahu.   That slide, from a volcano smaller than Mauna Loa, caused a mega-tsunami to hit the west coast of California with waves over a hundred meters (yes, that’s over 300 feet!) striking some parts of that whole long shore.  The waves hitting Hawaiian shores were much higher.  The northwestern edge of the big island faces almost directly toward the most populated sides of both Oahu and Kauai, the islands most populated regions (when adding the tourists at any given time).  The losses of property and life in case of such an event would be too great to even consider calculating here in this article.

Although Mauna Loa is monitored regularly, for indications of potential trouble, the sad fact today is that such measurements, unless a volcano like Mauna Loa, gives off ever increasing jolts to scientist’s instruments, there is little likelihood that a catastrophic failure of the volcano’s northwestern slope would give much of a warning to the hundreds of thousands of people living and frolicking on Oahu and Kauai.  A mega-tsunami would strike Waikiki within 20 minutes of a collapse and the populated shores of Kauai in 30 minutes.  The warning systems current in place on and around Oahu and Kauai would barely have time to initiate any of their systems to get people to high ground, real high ground.

The world, and the includes Hawaii and the USA as a whole, depends upon the pretty well documents fact that great mega-event geologic disturbances are rare and spread over hundreds, thousands or even millions of years.  That’s the number one, by a huge margin, defense against the damage that might be incurred.  Krakatoa was last mega-event the world experienced back in 1883 but it was as to nothing compared to the Nuuanu collapse, and it was also as to nothing if Mauna Loa’s flank went down into the sea.  With that mountain giving off shudders and sparks, as this article is written, there should be a massive scientific effort to probe what’s going on down in the bowels and magna chambers under the Hawaii’s big island, and that’s not happening.