Coffee Shop Alert!
Boy was I wrong.
Not about Starbucks in Santa Fe. On a quiet day you can hear that Starbucks suck all the way in Oklahoma.
No, I was wrong about that shop being the only coffee joint located near the Plaza of downtown Santa Fe.
There’s another, and another one of real note.
Its called Jacquelines and it’s easy to miss because it looks sort of like an art gallery. It’s half a block east of the Plaza on Lincoln. The coffee was smooth creamy Antiqua stuff and the chocolate bits and shaved nuts I threw in for free were terrific.
And this photo is of Mick, who was running the place, fresh out of Seoul Korea by way of Seattle Washington.
Great guys in there and great product.
I tipped twenty bucks instead of standing outside of Starbucks and wishing the people inside stuff I can’t write here! 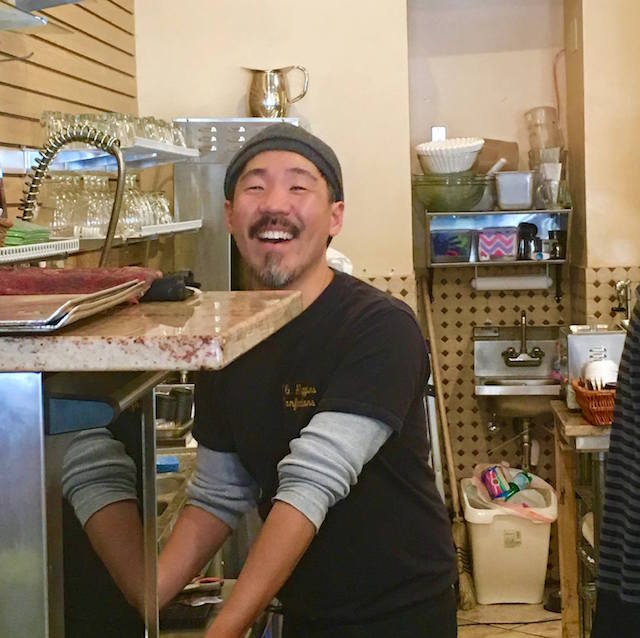 In the air above Denver, Colorado

In the air on a prop job. Flying at four hundred next to a whirling propeller, hoping the damn noisy thing stays on its axle or bearings or whatever. Going nearly as fast as a jet while feeling like travel at bi-plane speed.
Digital cameras.
They don’t work like our human eyes think they work. They cut and dice reality through a tiny lens and then reassemble the slices into a form we accept as an image of what our eye is perceiving at the same time. Take a look at this short video I shot of the propeller whirling at top speed, and way too fast for my eyes to see anything but a gray blur.
That’s not what the digital camera ‘saw’ and recorded. There’s no slow motion on my cell phone camera. The camera did that slow motion effect all on its own, revealing that digital processing is quite a bit different than presenting reality.
Here’s the interesting short video of the whirling prop….