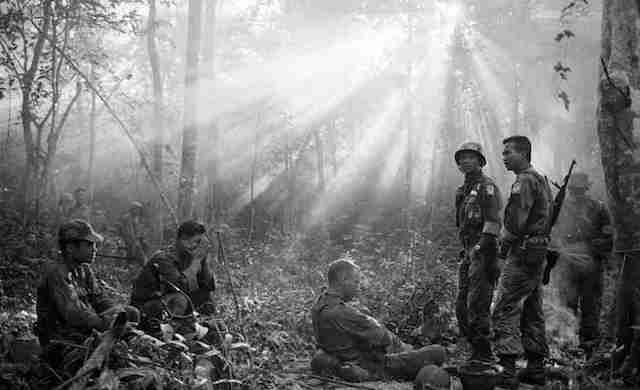 On the second day there was no meeting to plan the fake attack on Hill 110.

The Gunny drifted by when the big Double Trouble CH46 lifted off from resupply, loaded with body bags, the wounded and one Marine who’d served out his time. Actually, he was six days short of the thirteen months but he was called back to be processed out, whatever arcane procedure that might be. When I asked the Gunny about how someone ended up out with us to finish his tour, since most knew that if you lasted six months you got to go to the rear, he shrugged and said it was the luck of the draw. When I stared back at him with one raised eyebrow he relented.

“Pissed somebody off, like you,” he said, squatting down to brew some coffee and to drop off a large unmarked cardboard box. “Start the attack fire with artillery and then cut it back after a few hours,” he instructed. “That’ll give us enough time to take the hill.”

“And then we wait,” I responded. “We wait for orders to move on or for me to be transported to Okinawa for a general court-martial.”

The Gunny looked up at me, hesitating for a few seconds while stirring the instant coffee mix into his canteen holder. From behind me I heard suppressed laughing. Fusner, nearby joined in. Pretty soon the Gunny was laughing too. The laughing grew louder. I just sat there looking around in wonder.

“That’s good,” the Gunny said, putting his coffee down to wipe his eyes. “That’s really good, Junior,” like you’re going to Okinawa?”

Things settled down to the way they were after a few minutes.

“What’s so funny?” I finally asked.

“You’re not getting out of here to go to Okinawa or anyplace else,” the Gunny said, matter-of-factly. “None of us are. Magnussen got out because he was only here a week. Someone sent him in to kill him. We kept him off the perimeter and well back from point. He made it. We’re not making it.”

“Why him and not the rest of us?” I asked, my tone dark and negative.

“Because you’re the company commander,” the Gunny replied. “Here, these are for you, and the problem that comes with them.”

He pushed the box across my tiny moat and onto the edge of my poncho cover. I took the box and pried open the paper sealed the top. The box was filled with the distinctive plastic mosquito repellant bottles. According to a white slip glued to the back of the cover, there were sixty of them.

“I’ve already got plenty,” I said, my voice questioning. 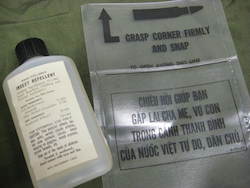 “There’s something about that stuff you don’t know,” The Gunny said. “If you take half a bottle, put it on your feet and wear clean socks for a day or two, then your feet break out and infection sets in so bad you can’t walk anymore.”

I peered closely at the side of the bottle. The ingredients listed a whole load of chemicals I’d never heard of or seen written anywhere.

“And this has to do with me how?” I asked, although in the back of my mind I was already thinking about pouring half a bottle in each of my socks.

“Got three cases this morning,” the Gunny said. “If we medevac them because they can’t walk then the whole company will be pouring that crap on their feet until they get out too. We can’t medevac them and they can’t function in the field.”

“And this has to do with me how?” I repeated, although this time my tone was low and sad.

“So,” I said, pausing to catch my breath. “I get to mount the phony attack that I can’t get court-martialed for and then handle the problem of three Marines who can’t be taken out of the field but can’t stay in the field either. And the day is just beginning.”

By the time I finished, my tone was acidic.

The Gunny had also referred to me as “Junior” and I didn’t like that one bit either. I hated him but I couldn’t hate him because he’d saved my life, and was likely to do so again if I was to have any chance of making it. I hated it all. The Marines, the mud, the bugs, the bug spray, the C-Rations, the battalion and even the country that had lied so knowingly and awfully in throwing me away in hell. I felt paralyzed with hate. Too frozen to even speak further. The Gunny watched me closely, nudging the steaming mud in front of him to put the remains of the composition B explosive out.

“Not quite,” he said so low it was almost a whisper.

“Not quite what,” I forced out.

“Fit?” I asked, incredulously. “How can a Lance Corporal be out of place in any Marine Company, for Christ’s sake?”

I asked, feeling like I was reaching the end of whatever tether I had left. The Gunny didn’t reply, probably gauging the level of my emotion. I was angrier than I’d ever been in my life, it was true, but not with heated anger. My anger was cold and seething and the more horrible for it. I could not truly express it at all, except by nuance.

“Okay, so tell me,” I began, my voice flat and level. “what color are the Marines with the athletes’ foot problem?”

“Good guess,” the Gunny replied. “All white. Cracker white. The black Marines don’t do the foot thing. They lay down and won’t fight or fire back at night so we can’t put them on the perimeter. It’s different.”

“And the corpsmen are all white, am I right there too?” I asked.

“They marked them for medevac but we can’t do it,” the Gunny said, putting his canteen rig back together, and then motioned to someone waiting behind the heavy brush. A big black Marine came forth and walked over to the Gunny and squatted down next to him.

“This the guy?” the man who was obviously Zero, asked. “He can’t go out by medevac and he can’t stay here,”

I said, no question in my voice.

Both Marines looked at me like I was something less than an intelligent human. Neither said “no shit,” which I was somehow thankful for.

“He won’t lay down and wants to do what he’s supposed to do as a Marine. And the whites will have something happen to him if I assign one knuckle-knocker to them.”

“Finally, an easy one,” I said to the Gunny with a cold unfeeling smile, having seen the procedure of knuckle-knocking many of the blacks did when they ran into one another, but not understanding it all except the obvious fact that it was so visibly and totally anti-white.

“He’s now a scout working for my scout sergeant,” I ordered. “And I presume the repellant is for me to decide whether it gets distributed or not. It can’t be distributed without Marines putting it in their sox so they can’t walk. It has to be distributed because without it the mosquitos will drive anyone totally insane, not that they aren’t already. So hand it out.”

“What about the three?” the Gunny asked.

"You’ll be running up against our three corpsmen if you don’t let them leave and you may need a corpsman yourself at some time.”

The Gunny finished and lingered a bit before getting up and walking away without the answer I didn’t have for him. I not only didn’t know what to do I didn’t want to know that I didn’t know. The Gunny had summed it up nicely. The decision was impossible. I couldn’t shoot them all in the butt. We had to keep them in the company somehow and the Gunny didn’t want to be denied help if he was wounded by going against the corpsmen.

“They call you junior?” the big black corporal asked.

“You report to Stevens back there behind me somewhere,”I said, pointing beyond the raised edge of my poncho cover where I couldn’t see.

“You don’t have to call me anything.”

I knew my last sentence didn’t mean anything either but I couldn’t think of anything intelligent to say. I didn’t want to tell anyone in the entire unit to call me sir. The sun would go down and everything would descend into the real jungle of the night and there were no ‘sirs’ living in that jungle night. There were not supposed to be any factions in a Marine unit, other than the ‘factions’ of platoons, squads and fire teams. My company, if I was to call it that, was divided and sub-divided into tribal groups based upon function, experience, race, and quite possibly religion. There were those who apparently wouldn’t fight at all and those who’d fight but use every crooked device possible to get out of the fight. I gestured for Fusner and then called in the strike upon Hill 110. Hours of 105 and 155 artillery dropped onto every aspect of the hill. Using high-arc indirect fire I even rained shells down on the backside of the hill. The Gunny came back when the earth-shaking and noise came to an end. He brewed another cup in front of me, saying nothing.

“I sent the message to battalion,” he answered.

“But that’s not all of it, is it,” I said, reading his worried expression.

“No,” he came right back. “Lima Company on our flank has a couple of 81mm mortars. Battalion’s sending them over with a squad to support our defense of the hill.”

I laughed out loud. “This just gets better and better. I suppose we have to do a casualty report. Should we makeup KIA and WIA reports and then wait for the night for our guys to kill one another?”

The Gunny said nothing.

“How do we handle the Lima problem,” I asked him. “Fire mission while they’re on the way?”

The Gunny stared, his eyes getting wider. “You’re kidding, right?”

I just looked back at him, realizing I really didn’t give a damn whether the Marine Corps might have one little mortar squad or another go missing or not.

“Big of you,” I answered, sarcastically. “I’ll lay here and worry about going to Okinawa.”

I regretted the words when I said them. The Gunny was doing his best in an insane situation.

“Sorry,” I got out, standing to face him. “Don’t worry about those guys…or yourself either. No fire mission.”

The Gunny exhaled loudly, turning away.

“Just don’t tell me shit like that anymore.” He walked off into the jungle.

I looked at my growing tribe of scouts, all crouching over their own cooking fire behind my poncho liner half-tent. I didn’t understand what the Gunny’s last comment meant. I didn’t understand the blacks, the whites, the corpsmen, the trouble with the repellant or any of it. I also didn’t understand why I was supposed to understand any of it. I had no training at all, really. Only in artillery and map reading. I wished that I had the old Waffen SS field manual I’d read so many years ago, about the Germans who had to fight the Vietnamese before me. The night would be coming and my tracers would not be in until the following dawn if resupply went then. I laid down, wondering what the Gunny was going to do with the Lima Marines, opening a can of Ham and Mothers and taking out the stuff I needed to write my third letter home. A third letter about the pleasing fauna, lovely flora, and acceptably comfortable weather.