John Tittle and his friend Coaster.

John wears his shoes without laces because he says they don’t return your laces when they let you out of the ‘facility’ when they pick you up for not having enough money on some nights. Hmmm. There are quite a few people like John hanging about the Plaza and constantly moving and sitting around near the heart of the City of Santa Fe.

Amazingly enough, they almost all appear like John and Coaster, fairly well kept, smiling (for the most part) and extremely well mannered. No loud stuff at all and no forceful panhandling which is more successful with me than the other. I consider it part of the entertainment, and don’t take that the wrong way, so I pay for the entertainment by being what most would consider an easy mark.

By the time the day is done though I may have spent forty or fifty dollars in contributions, or maybe a bit more. Just what do we pay for a sports game today though? And I feel like I’m helping in my own way, even if the money might be going for booze or other anesthetics…….. 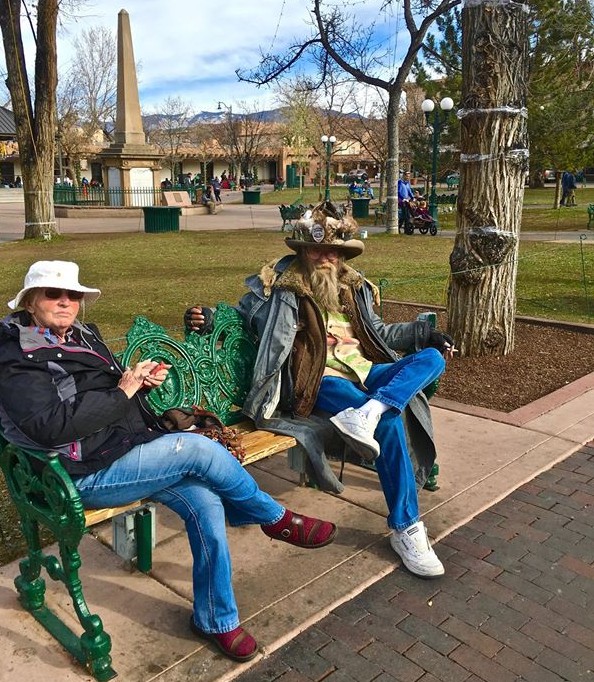 The cars the Spanish people, down from Espanola, used to drive around the Plaza all the time are nowhere to be seen. But this is what I’ve been observing. A Z28, no less. No Tesla here. The wheels are so big the rig seems like it might only be seen in a cartoon. But it rolls along quite fine. I don’t know what color that paint, custom layered over the exterior, is but it certainly gets attention, which must be the whole idea.

I  liked the slow moving display. Like most everything in Santa Fe on a slow, sleepy weekday morning, quiet and easy going.

Laid back, getting ready for nobody knows what. 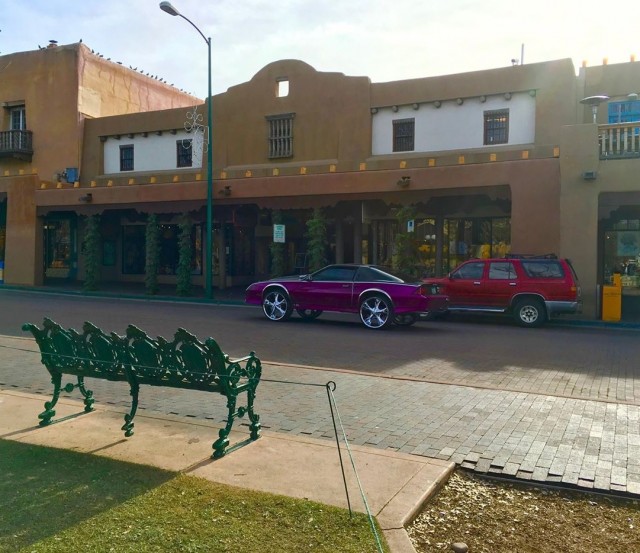 Breaking the Fast…..Santa Fe AM

Seven bucks with coffee. The green chili enchiladas.
Special for the day.
Fridays only!
The heat is almost bearable and they don’t serve water unless you ask. Athena, the most lovely local waitress (been there for 17 years,) waited until I could not really speak very well to take my ice water request. Her grin said it all.

Not her first rodeo with off-colored strangers down from the north. But you cannot stop eating until you start. It is that good. Amazing, really, and simply not found in this kind of simple quality outside of New Mexico.

Bourdaine, eat your heart out. I cruised by “Parts Unknown“, the store that has the same name as Anthony’s show. The place he didn’t visit, and they are still mad about, when he brought the show to Santa Fe.
Emotions smolder like old campfire embers in Santa Fe, but the smiles are radiant unless you hang with the Native Americans.
Only their eyes laugh. 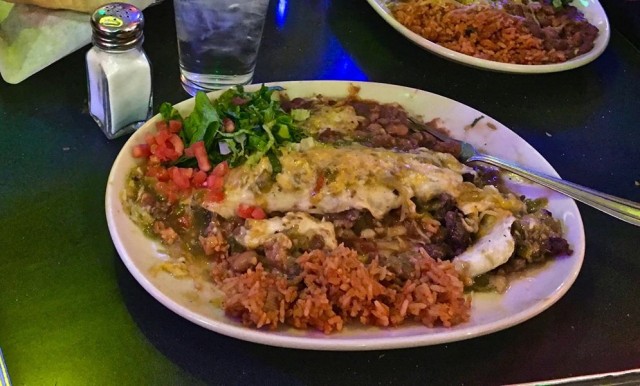 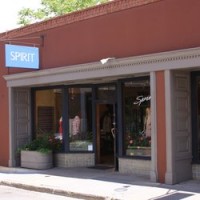 Yosehanna.
Playing on his steel drum, the metal supposedly forged in Berlin, Germany.
Or whatever.
Or wherever.

Santa Fe continues to be inundated with street performers even though the daytime high is forty-four degrees. Everyone is out and about because of the sunshine which makes it feel like it’s sixty or so. Downtown Santa Fe at noon across San Francisco Street from the Spirit Store (where they have thirteen hundred dollar purses and tell you that those are comparatively inexpensive). Yosehanna plays on, doing quite well in contributions and seeming to have a grand time doing it. 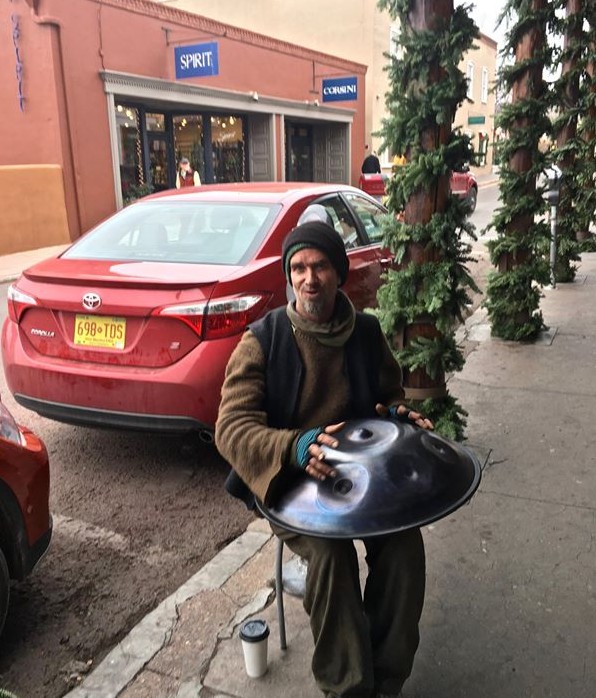 The dogs come from seemingly everywhere to greet and meet me. This time in an elevator. I didn’t know they allowed dogs in this high class elevator but then these two miniature Australian sheep collies, I think, were not exactly low class either. They ignored me, probably because I was not a miniature sheep. The people at the other ends of their leashes looked leathery enough to be aliens, reptiles or merely desert folk.
Santa Fe midday…. 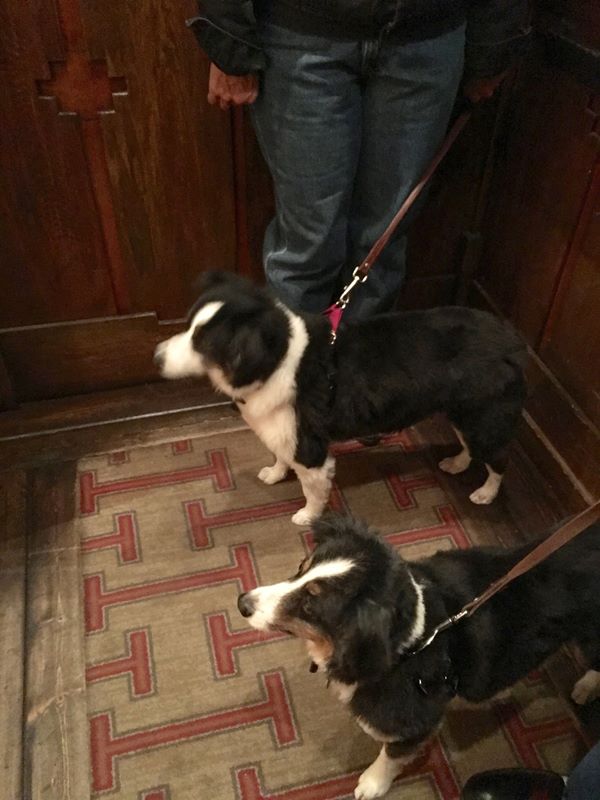 Attorney Client Privilege!
The attorney is the one with the upraised fist and mean-spirited macho mustache. The client is the one who just came from a hair stylist that attempted to get her hair to blend right into her leather coat. Not that I was having breakfast at Tia Sophia’s and listening in. Who could not help but listen in? Anyway, it seems that the attorney was about to take her back into court and was letting her know that if she acted outside of his direction again it was going to lead to more than he simply discharging himself from her case.

I carefully ate my Atrisco (scrambled eggs and sausage on the side with a heaping bowl of green chili stew) while I did not listen to one word. I swear, your honor!

The sun’s going away.
Down San Francisco Street to find just the right bar.
There are a lot of bars in Santa Fe.
What looked promising?
Several street corner places as you stroll north toward Guadalupe. But then there it was. A guy steps out in his cowboy boots, hawks something down onto the curb and tosses his cigarette still lit onto the sidewalk. The door closes on that scene. What’s behind the door. The entire front window of the bar is covered in an artfully decorated paint scheme. Probably a carry-conceal kind of a place.
I went in, of course, carrying only my rather expressively poisonous personality and disarming sense of Walter Mitty charm.
Here’s the paint scheme powerfully drawing me inside the place…. 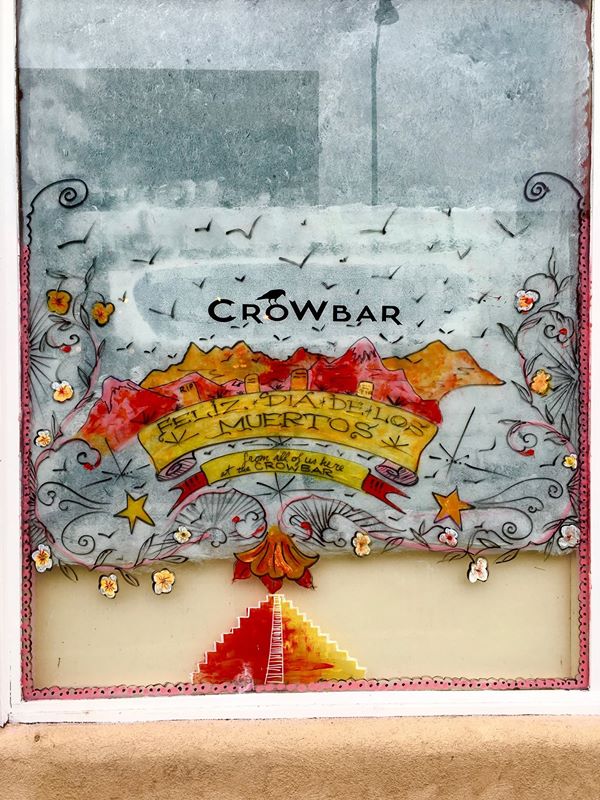 Slightly modified to six degrees from top dead center.
The afternoon overcast, the Indians on the Plaza huddling inside their own well made blankets and the streets relatively thin in passing population.
The Crowbar Bar.
The place where you get in with money but need a crowbar to get out of.
A dog waits for Kyle, his owner, outside down the street. The big dog’s so well trained that no leash or securing rope is required. He’s also so well trained that his owner’s idea of dressing him up in Santa Fe style is not worth fighting or killing over.
The dog accepts petting as long as his sun glasses remain undisturbed, or at least less disturbed than his Crowbar residing owner. 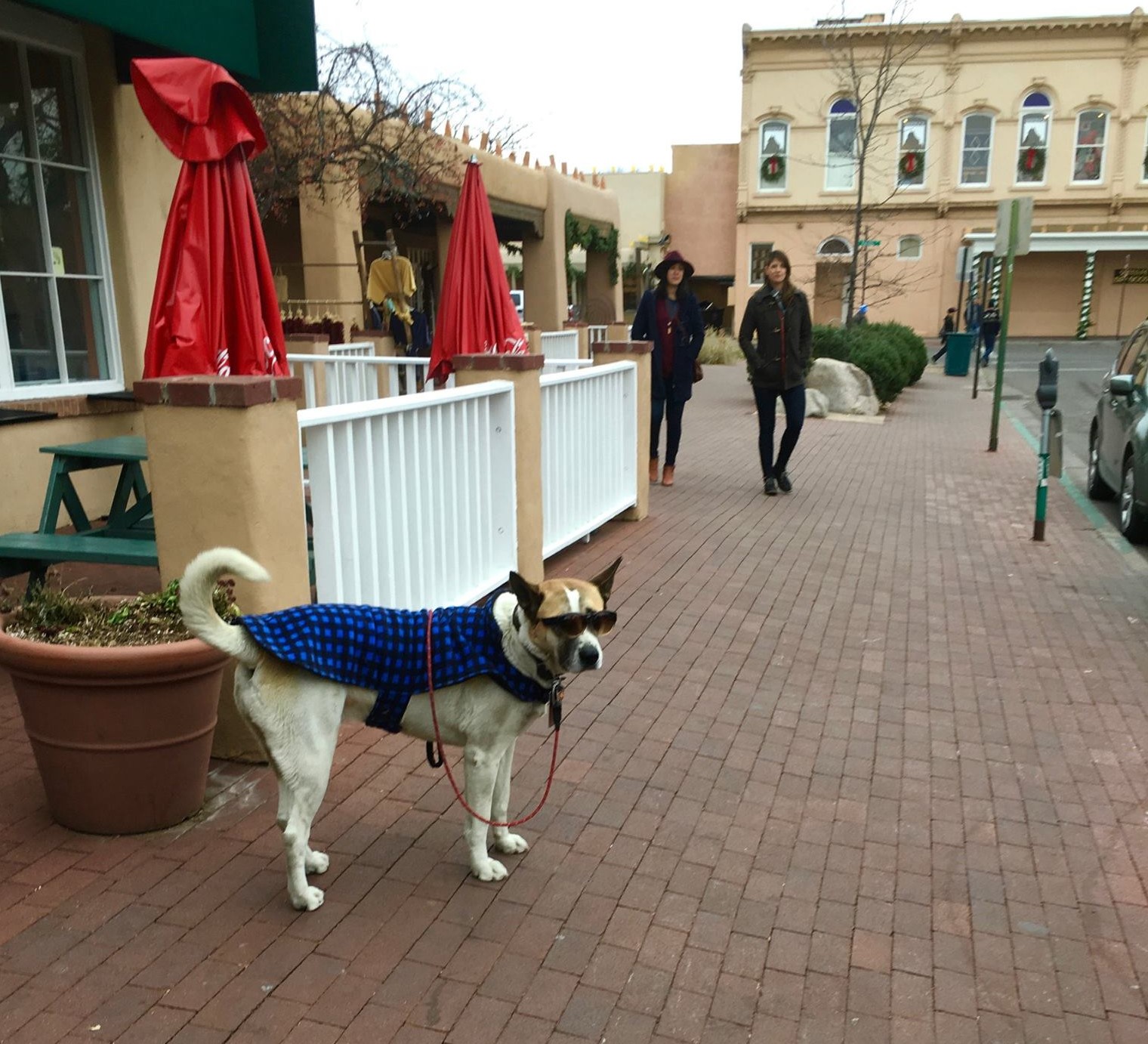