From The Wilderness, Article Eighty-One 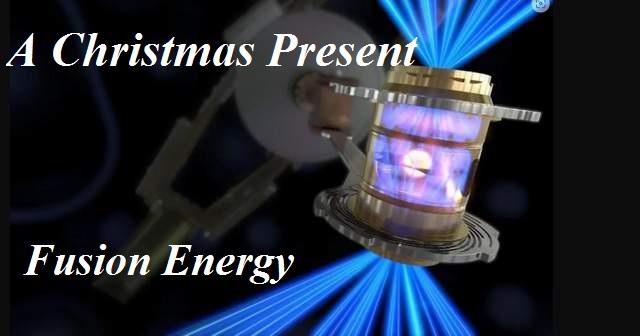 THE GREATEST CHRISTMAS GIFT OF ALL

You are not reading or seeing very much at all about this great Christmas gift in the papers, on television or even the Internet.  The greatest present of all is God’s delivery of fusion power to humanity and what that really means.  So far, what has been written about this earthshaking, universe-shaking gift, has all been about the environmentally friendly nature of the process, which does not damage to the environment at all (and subsequently replaces all those process that do so much damage in producing energy).  That part of the gift is a very minor aside to what fusion and its applications will meant to everyone on the planet if its effects are allowed to reach them.

The fossil fuel industry, and that’s a huge part of all developed civilization, is not going to allow fusion to be fostered and rapidly built to replace the energy industry of today.  That industry, thanks to such lauded ‘heroes’ like Westinghouse and Edison, who did nothing more or less than hold mankind back from much more significant progress and personally enrich themselves, is not going to go quietly into the night and its dampening effects are  being felt right at the beginning, as the announcement of beyond-break-even energy production has been relegated to back pages or no mention at all.  There is more news on rescue dogs, first responders, and even wedding dress manufacturers on the news all over this past weekend, as Christmas approaches.

The ability to have a self-maintaining and self-growing source of energy to power everything should provide energy to all, but I have already written about the first time around for that, when Nicolai Tesla created AC electricity and thought energy would become readily available for all for free over a hundred years ago.  Mankind is simply not founded upon such generous or beneficent principals or foundations.  The inherent selfishness built genetically into the very being of every human does not allow for complete beneficence toward other humans.  That’s the stuff of fiction and mythology.  It’s hoped for.  It’s cravenly desired, but only hoped and desired for others to exhibit and sacrifice for, not for individuals themselves.  The Christmas season is a perfect example of humanity’s desire to receive while portraying an outgoing sense of giving.

The building of fusion power machines, to the point where fusion power machines build other machines like them, is going to be expensive, time consuming and very politically difficult.  There is no question, to use an example, that the culture or cultures that control space travel and the locations of colonies, mining operations and so much more out in space will control the rest of humanity eventually.  But there has been no ability for any single culture, even after the U.S. demonstrated in the late sixties that it had the ability to continue to develop its space program to rather rapidly accomplish that goal, to proceed.  Instead of looking ahead and outward, the U.S. turned inward and began looking down at its own feet, which it mostly remains mired to this day.  The new single weapons system called the B-21 bomber is budgeted to get more money than the entire space program for years on into the future.  There is no published budget yet for the development of fusion as the replacement power source for which there will be no competition for and there will not likely be one for some time.

During the Christmas season most of western Christian, and some non-Christian, cultures apply themselves to be more selfless and more caring about the survival and comfort of others around them, but that’s not the general rule of the survival-of-the-fittest kind of hard and real behavior exhibited by most humans almost all the time.  The coming of fusion energy is the most generous and openly expansive development in mankind’s history, but it can only become so it is allowed to become so.  The Christmas gift that will keep on giving on into the eternity of the universe’s existence can only become that if it is developed and powered by a tamping down of mankind’s taking foundations.

Merry Christmas. The gift of all time is sitting under the tree.  How many more Christmases must pass before the present is finally opened?  Only God knows the answer to that Christmas question.