From The Wilderness. Article Eighty-Seven 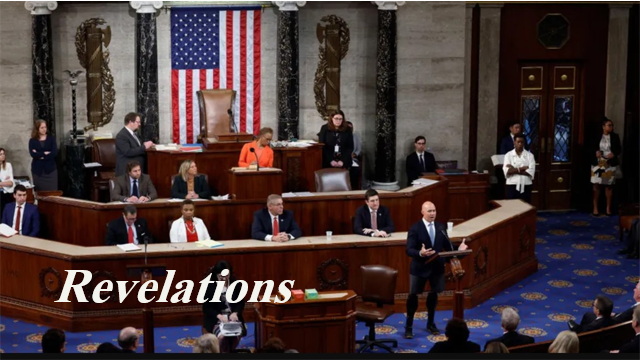 Quite likely now, the most important, and possibly devastating, revelations about the current republican party are all being revealed in this current political ‘log jam’ set right in the middle of the great American political river.  The revelations are being verbalized every day now by the people who are coming forward to nominate other members for the speakership.  America’s attention is riveted to this continuing daily, and sometimes nightly, television drama.  One after another, nominators from both sides spew out revelations that eat at the very heart and fabric of the human condition.  Cries to extinguish the futures and very lives of would-be immigrants, legal or otherwise, are murderously, cruelly and piteously presented, along with milquetoast commentary celebrating how calm, organized and patiently and generously waiting in the wings is the opposing party.  The country has been basically blind to what’s behind the faces and personalities who have come to define the emotional new messaging of both parties.  It’s no longer about the performance, it has been about the talking about the performance…and the talked about performance never happens.  These speakers nominating other representatives are giving away a lot without realizing that they probably have never had a bigger general audience.  The continuing odyssey of the ‘run McCarthy into the dirt’ series has attracted so much attention that the president’s weak attempts to horn in on the show (his attempted speech to the public on Thursday night, just when a ballot count was being started was cut off by the networks and cable news in favor of the ballot count show).  Biden tried that same play more successfully a few days before with the big celebration of building McConnel’s Kentucky/Ohio bridge presentation.  But the ballots are winning, and also making Biden look and act weaker in comparison.

Kevin McCarthy is fighting for his political life and yet the mass media is not describing his fight for such a personal goal at all.  Instead, the mass media is decrying his willingness to step forward, kneel down, place his head on the block and allow it to be metaphorically chopped off.  Why should this guy quit, working within the system he’s been a part of for so long, and also served in so many leadership positions?  It’s got to hurt the hell out of this man, no matter what kind of man he is perceived to be, that he’s being rejected by many of the same young politicians that he not only funded with his huge PAC money supply but also recruited them to run for the offices they currently serve in.  Kevin’s personal hurt and pain, having to be very well disguised as he walks the now hollow halls of congress filled with throngs of people but with very few real humans he can any longer identify with, has to be totally hidden.  There are only predators and prey among those people, unless they consist of service people serving predators and prey alike…they don’t really exist at all in that world, although their imprint, and work will remain long after all the current representatives are gone.

The former record for the number of ballots in-a-row that had to be cast to finally get a speaker was in 1856, and that took 133 ballots.  That date and those numbers are misquoted all the time on the national media, which also tells an audience paying attention that the real and live news being broadcast today is anything but fully and analytically accurate.  This is not 1865 when external communication to the public was almost non-existent in real time, and also when time was spent quite differently than it is today by the players involved.  How long can the members currently serving continue to show up for ballot after ballot?  That begins to become a looming question.  Modern representatives are ‘rock stars’ at home and in many cases with the mass media.  They have other stuff to consider when it comes to money, public, family, health and stardom measures and required performances.  Who’s not going to show as this wears on?  McCarthy may well be calculating just how this might play out as things move toward additional ballots.  The more people who don’t show, the more ‘present’ votes are cast (as no-shows are considered).  Each present vote lowers the threshold for voting.

All it takes is six presents to be cast and the democrats, if they all show up (all 212 of them) can win the speakership for Hakeem because those presents would drop the requirement for votes to go down to 212.  So, even though it would help McCarthy to get the threshold to be lower he can’t let it get too low and therefore he’s got to get his people to show up.  Since the block against him, at about 20 representatives, is so large compared to the margin of votes he needs (and that margin has never been so close for the selection of any speaker in history), he’s playing a very precarious and ever-changing game. But a game it is, and that game is called democracy, now being played out at it’s very most imprssive best.