From The Wilderness, Article Forty-Three 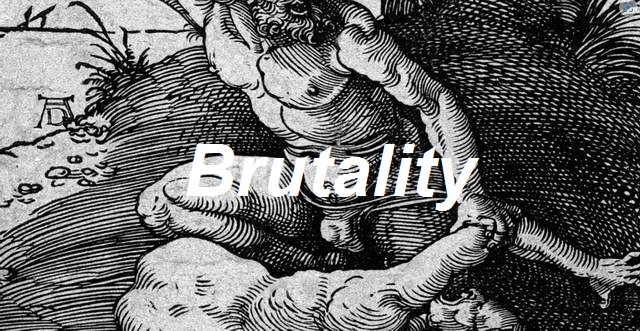 The entire planet of living animal life communicates in some way or another, and that communication involves all the senses that life possesses.  A vital ‘last ditch’ manner of communication expression is through physical action.  That can entail fight or flight.  If fight is the choice, then brutal violence can be a very likely result.  Although the human species has come to dominate the world we know, in every way we can know, it didn’t develop what is called civilization today by the use of this ‘last ditch’ means of communication.  It did, and continues to do so, out of social and cooperative capability, but the last-ditch model remains ever available, whether called assault, an altercation, murder or even war. Seemingly, normal humans can go to the extreme of using physical brutality as a form of communication in order to either gain notice or change actions in many different circumstances, although in many cases, exclusive of group actions by collections of humans, these resorts to brutality are most often generated by those who are, for the most part, alone and with little in the way of life’s civilization benefits to lose.

The recent attack in Speaker of the House Pelosi’s home, and the serious injury of her husband, is one such glaring example.  How the attacking individual was motivated to take the action he took, in obviously attempting to kill Mr. Pelosi and quite possibly Mrs. Pelosi if she’d been home, is important (let’s not forget his shouting of “Where’s Nancy?” as he was overheard to say by the responding members of the local police force…which echoes all the way back to the mob attack on the congress on January 6th), it might be even more important to consider that the attacker fit perfectly into a genre of attackers who’ve gone after other rather unprotected humans (Uvalde comes to mind, or Sandy Hook, and so many more).

Brutality, as a means of communication, can rather effectively be argued to be the root result that ends up in something we call war, when it occurs between nations.  Currently, there’s this kind of ‘communication’ going on between Russia and Ukraine as this is written.  Ukraine is crying out for help, communicating that it is being attacked physically, while Russia is attacking while claiming that it is being attacked culturally and socially.  Neither side can agree on anything in this struggle and brutality becomes the ultimate result.  How much violence, particularly in this conflict (unlike those ‘communications’ conflicts that occurred in all the previous wars that have followed WWII) is still to be determined because one side of the conflict has, and is threatening to use, nuclear weapons to resolve the issues.

Sociology, anthropology and psychology are all academic disciplines that analyze and study the applications of brutality, currently and historically.  There is little question about the demonstrated truth with respect to much of that brutality.  It is, many times, risen up out of drug-induced or alcohol-induced reactions to loneliness and frustration.  It is also, in so many cases, the result of mental illness of one type or another.  With a population of about 335 million humans, the U.S. recorded (formally) just over 1.5 million physical assaults in 2021.  That number is considered to be extremely conservative, since so many assaults are never reported.

If three million assaults were likely committed that still amounts to less than one percent of the entire population.  These scientific disciplines do little to study or discuss the effect that the mythological construct of much of today’s entertainment, particularly the entertainment directed to young male adults, is of a truly violent nature.  The violent, brutal and killing video games, the movie and television scripts and results depicting openly brutal maiming and murder, with supposed community approval, goes on endlessly.  Movie murderers like John Wick, Rambo and even Dirty Harry meet with almost overwhelming public approval.  Boxing, as the mentally murderous sport it really is, continues to be well-attended and paid for…it’s ‘champions’ celebrated until their ‘sport’ reduces] them to near-gibbering idiots.  College and professional football accept that traumatic brain injury is merely part of the sport.

How can the culture work to wean itself off of violence when it wildly decries such violence in reality but celebrates it so diligently and with such popularity in its entertainment?  This conundrum goes without resolution in almost every area.  The instruments used for furthering the transfer from entertainment brutality to brutality in real life continue unabated.  Gun laws continue to weaken, and guns (one of the most brutal tools of real physical violence) continue to not only multiply in number but become ever less regulated in use or possession.

The Pelosi incident will go down to the Pelosi family not having had sufficient security, just as the school violence conclusions come to the same judgments, but an entire society cannot protect itself by having a tiny part of it securing it from harm.  The society must react to the violence itself, and that means doing something that’s nearly impossible…changing an entrenched (and likely genetically derived) belief system.