From The Wilderness, Article Ninety-One 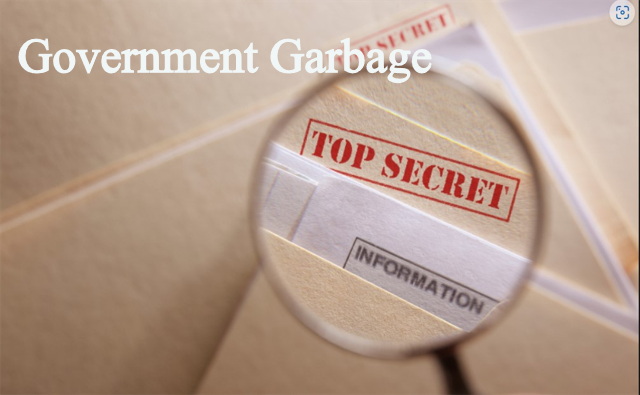 I seldom turn off the news or cast aside my daily delivered issue of the New York Times.  I have been doing so lately.  Streaming has its benefits, as the fiction shows and movies located on those premium sites are, by and large, filled with a lot more truth than the daily news these days.  Since I know at the very corps of my being, as I lived it, that the classified documents scandals and found papers cannot be real (there a registered publications system for that stuff that is rigidly monitored and policed, so there are no classified documents just missing or float around somewhere or other) I have zero interest in the Trump/Biden classified document scandals, developed or developing.  They are not real, simply because they cannot be.

So, what is going on?

We, and I am part of it now, the unknowing public, don’t get to know.  We can figure out fairly easily that what is going on in almost any area is not what is being reported.  We can also wait, watch and analyze what we do get through the speeches of government officials and the mass media and then try to figure out what’s really going on or has gone on.  Nobody, anymore, really believes that the single gunman named Oswald killed JFK or the other guy (Sirhan) his brother, but the most secret files built around those assassinations remain classified and unpublished to this day.  Why?  Because the story the public has been fed is garbage or those files would not have to be secret or redacted.  Those are two examples of what goes on at the top levels which cause all of us, over time, to distrust those who lead this great experiment called the United States of America.  911 is another one.  We don’t know, in reality.

We went to war with Iraq over some supposed flight students from Saudi Arabia impossibly flying civilian airliners into buildings.  After hundreds of thousands died there, we went to war with Afghanistan where thousands more died.  For everyone who died in the towers that day on September 11th, the U.S. has spent one billion dollars each to get revenge.  The public knows nothing, but goes along with this very expensive endeavor because, well, because.   UFO’s have met the same fate, ever since being fully outed and discovered by pilots fighting in WWII.  The classified files remain to this day on much about those supposed extraterrestrial vehicles.  Supposedly, the classification of files is there because America’s black projects might be revealed.  However, when pilots during WWII and then right after were reporting about the appearance of ‘foo fighters’ among them (the name of UFOs back then) the only black projects were those of black airmen fighting in the skies (the Tuskegee Airmen come to mind).

How are all the secrets, secrets everyone in this country who is of any age know to be secrets, kept to effectively and well?  We don’t really know squat about the assassinations, 911, UFOs and so much more.  That means, in spite of the obvious fact that everyone is being constantly lied to, that the system of classification is tight and works really well, at least in preventing the American public from knowing.  It sure does not allow for documents of very high sensitivity to be floating around unguarded and unpoliced in places like Trump’s residences or Bidens old offices and garages.  People would be responsible for those documents and not the people who were reading them or supposedly ‘checking them out.’  People’s careers would be ended, and prison would be the result for a lot of those people responsible for possession and only very controlled dissemination of them.  That, obviously, is not happening in these situations.  In fact, the mass media is perfectly capable of finding out exactly how the registered publications system works and is implemented throughout the country and world. Why is nothing being written about this?

The system, at the very top, is always up to something or other, and they are up to it right now, irrespective of individual leadership or parties.  That much, knowing what I know about registered publications, is true.  What exactly is going on is about as easy to figure out as what really happened on September 11th.  I don’t know the answer and I’m not intended to know (and neither are you) and they are awfully good at keeping secrets while blasting out all over that the secrets of the nation are being revealed and strewn around like old comic books.

The nation is being served up a meal made up of garbage and being told it is experiencing fine dining…once again.