From The Wilderness, Article Sixty-Two 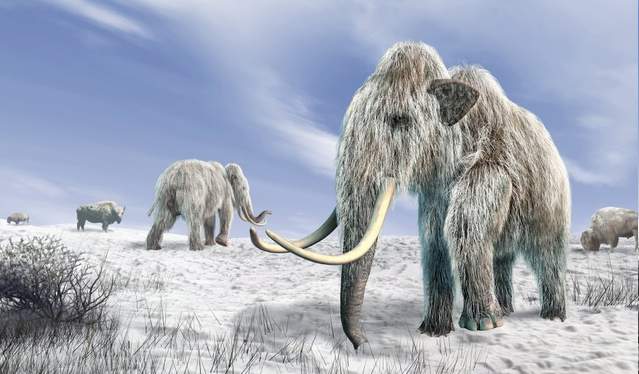 Back in 1997 I traveled to Northern Russia to take in the excavation of an entire Wooly Mammoth, buried deep under the permafrost of the Magadan Tundra.  I was a professor of anthropology at Chaminade University at the time.  The Mammoth excavation was extraordinary, but what was found with it was never to make it into later analysis, study or communications, public or even private.  What was found with it, and later inside it, was tropical plant matter.  Mammoth were herbivores, so only consumed plants and much less else.  The Mammoth was dated to have died about 16,000 years ago.  The tropical plant life around the bones and preserved in its abdominal area, already consumed, was therefore a product of the giant animal having roamed and died in a tropical region.

That fact could not be denied by the evidence.  What was to be done?  Classical theory didn’t allow for the northern reaches of Russia to have been tropical any time since ‘possibly’ 500,000 years ago. The interglacial pauses of long cold temperatures only changed the weather by a few degrees, at most.  How did that mammoth come to be undeniably filled and surrounded by tropical plant matter?  The findings of the scientists were immediate and final (I was a visiting observer from Hawaii, of all places).  The Mammoth remains were cleaned up, all plant matter removed and the complete skeleton and some other remains were transported to Washington D.C. to be prepared and shown at the Smithsonian Museum.  The work to prepare the incredibly complete Mammoth was undertaken in full swing, but not until 2014.  The remains were expected to be shown at the Natural History part of the Smithsonian in 2019 or 2020.  To date, nothing has been shown and nothing about that mostly complete and preserved Mammoth body has ever been released.  The tropical matter was destroyed and the incident and appearance of it was noted in a footnote but listed as an unresolved anomaly.

In 1977 a set of stainless-steel balls, three of them, each about four inches in diameter, were pulled from inside a great piece of rock from a South American mine.  The balls were turned over to a museum and an investigation conducted. The balls were dated several times to be about 300,000 years old.  The stainless-steel formula, analyzed by sampling and subjected to atomic analysis, yielded the unbelievable fact that the formula of metals endemic to the creation of stainless steel (it requires advanced smelting, mixing and production methods and tools, not to mention the assembly of the proper elements necessary to mold the balls. The balls contained the right mix of iron, chromium, carbon and manganese.  The ‘machining’ of the balls appeared to be near perfect.  None of any of what was discovered was possible.  The Museum studied the balls for three years before declaring them an anomaly and putting them on display as such.  Three years later the balls were removed from display and retired to basement storage. Five years later, a search for the balls revealed that they had disappeared.  Those stainless-steel balls have never been found.

Today, the science of astrophysics has concluded that dark matter makes up about thirty percent of the universe.  It cannot be seen or measure in any way except one, and that’s by observation of effects by studying stars from a distance and the way they act and react to one another.  Think about that.  Take a pail of water half full.  A regular pail.  The half full pail has a gallon of water in it.  The pail weights two pounds. The water, and water everywhere it’s known to exist, weighs 8.4 pounds to a gallon.  The pail, in total, with the water inside it, should weigh in at 10,2 pounds.  But it doesn’t.  It weighs in, each and every time weighed, at 12 pounds, give or take an ounce.  Now, conclude for yourself why this inequity exists.  The astrophysicists, using this construct as an example, will tell you that the extra weight is dark matter.  You can’t see it or measure it in any other way.  Using this mythically created example is misleading in the real world, because the pail will always weight 10.2 lbs., but the conclusionary thought process is what I am writing about.

Those ‘anomalies’ explain nothing, except that the current theory for that would allow for all three of those things to be as fake as can be doesn’t exist. It’s not allowed to exist.  We are hide bound by our own theories.  An atom is not a perfect sphere as we’ve been taught in all schooling.  Atoms are rough and punchy, like misshaped softballs.  That cannot be.  Electrons cannot spin perfectly around a tiny nucleus at the speed of light and not be doing so to form a virtual sphere around that nucleus. It cannot be that atoms are not perfect spheres. They are not.

How can we, as a species, forge ahead on into space and toward greater and greater understanding of the universe around us if we will not, cannot, accept evidence when it is placed right in front of us.

In the movie called Planes, Trains, and Automobiles, the two great stars are driving on a freeway at night when a car with two older people in it were driving on the right part of the freeway and yelling across the short distance to the two stars in their own speeding vehicle: “You are going the wrong way,” the couple yelled at the top of their lungs.  The two stars both laughed together and kept driving the wrong way on the freeway.  They discussed the humor they thought expressed by what the couple was yelling at them.  John Candy concluded, before the car ran between two semi-trucks: “How in hell can they possibly know where we’re going?”  Where is the world going and where are we going to arrive if we can’t accept even the most obvious of evidence pointing out the fact that in many areas, we are going the wrong way.