From The Wilderness, Article Thirty 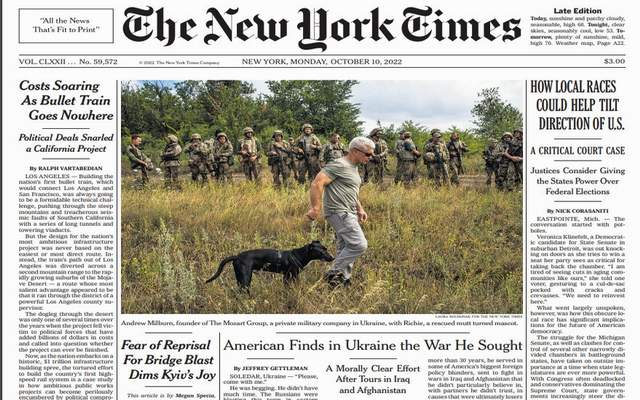 THE HERO FROM HELL

The New York Times doesn’t kill anybody on purpose.  If only life were that simple and decisions could be made upon such direct and honest, although killing, truths.  No, the New York Times kills Americans using a much more prevaricating and slippery tool.  That tool was so well described by anthropologist Joseph Campbell so many years ago, before his own death.  The Power of Myth was what that brilliant man wrote about, and that power is quite possibly the most powerful cultural and social force across the world. The power of myth is using belief to motivate other humans, and even oneself, to take action after basing such action on a belief or beliefs that are anything but true.  Truth comes with life experience, but spoken and written truths are delivered from a distance, at angles, and with great force however subtle might seem the delivery instrument.

The New York Times ran its front page story today (October 10, 2022), using a nearly one-fifth of the front page photograph of a very fit aging ex-Marine Colonel, walking beside his rescue dog Richie while doing so before a gathered force of supposed American volunteers serving in combat in the Ukraine.  The Colonel, Andrew Milburn, was supposedly a veteran of combat in Somalia, Iraq, and Afghanistan, but those ‘combats,’ according to the myth-telling writer of the article named Jeffrey Gettleman, were not enough.  The Colonel, being made of much sterner stuff (as belied by the ‘carries himself as a soldier’ descriptor) and wanted more.  He went to Ukraine, where he ended up in a place called Soledar.  He somehow organized and built one of the largest military companies of Americans in Ukraine called the Mozart Group.

Mr. Jefferey Gettleman (the writer) is killing Americans, probably in greater numbers than the former Marine Corps Colonel he is lying about.  There’s no Veteran’s Administration waiting for these American veterans of Ukraine when they come home.  No care, unless they can pay for it out of pocket.  There’re no benefits at all.  There’re also no Geneva Convention protections that apply to these foreigners should they get caught by the Russians (some get caught for ransom, the rest get quickly or slowly dead…as the Russians have never had a reputation for caring for enemy prisoners).

The use of mythology, created by stupendous but brilliant ignorance, is overwhelming and expressed throughout this awful but interesting and well-written piece of total fiction.  There are no passages through combat areas with your friends, losing just a few along the way as you go.  That’s one small journey across the country portrayed in this mythological construct.  Real combat kills, and that is how it trains.  You learn about a boobytrap or I.E.D. by watching body parts fly past you from the explosion.  You may, if lucky, in the real world of combat, get to recognize those body parts as your own before death overcomes you.   Also, a bit of truth in Gettleman’s writing in this article, truth without his knowing he was writing some truth, of course.  The Colonel leads and trains.  His ‘Mozart’ force does any combat called for.  That’s part of combat truth.  Once reaching a certain rank, in combat situations (like major or colonel), one does not go into actual combat because it’s not called for. The new guys do the fighting while the high-ranking superiors re-supply both more men, food, water and everything else needed to keep the real combat force moving toward the enemy and dying.

If you read this then please pay attention if you have any idea at all that you’d like to go to a ‘real’ war because you’ll die there and, quite probably, nobody will ever know.  The Colonel didn’t go there to be in a real war.  He went to Ukraine to be used by the Ukrainians to get as many Americans involved as possible.  He sends those Americans in to die (‘five days isn’t enough time to train for combat but ‘it’ll have to do’ is one of the Colonel’s idiotic quotes), more than likely made up by Gettleman.  That same author touts the war in the Ukraine as a “real” war, while Vietnam, Iraq, and Afghanistan were “murky” wars.  Like getting killed by being shredded, blown to pieces, or caught and tortured to death are better exercised when experienced in a “real” war.

The New York Times is supposed to have better editors. It does not. It is killing young, and some not-so-young, American men and those editors should have enough experience to know better and stop doing it.  But brilliant ignorance and stupidity have been a part of the human condition for a long time, and this exercise in deadly idiocy proves that it is sure as hell still with us.  The Colonel will come home with a pile of money from his building of a private army to die for nothing.  The New York Times and Gettleman will get Pulitzers and more fame.  Only the poor saps reading and believing the crap dished out in the New York Times story will pay, with their lives, body parts, and post-traumatic mental wounds.

My name is James Strauss and I was a company commander in Vietnam down in the A Shau Valley.  I was wounded three times and lost more men to death during a month than one fifth of all who died in the entire war in Afghanistan.  I lived but my guys, like the Colonel’s Mozart warriors, did not.  My regret is life-long.  I believed.  I loved the Marine uniform (still do), the music (still do) but not the memories that have resulted in this revolting review of the New York Times Front Page Article.

There is no shame to be assigned to the Times or Gettleman.  They were, and remain, totally ignorant about what really goes on inside the guts of a real war, no matter how its ‘flavor’ is described.  I don’t want Gettleman or the Time’s editors to go to the real war front because I don’t wish them dead.   My books are: The Thirty Days Has September (series of three) and then The Cowardly Lion series about coming home.  The Times and Gettleman would do well to read them, although they will not, and if they did they would not believe.  Mythology is so much more comforting, warm and has a happy ending. Richie the rescue dog is saved.  Who can forget the dog?  The Colonel gets a passel of money and phony credits about combat he can form stories about for the rest of his life.  The Times and Gettleman get their fame added to and the prizes.  I’m just the former combat leader who lost so many boys, was shot so many times, has so many scars, and live one-hundred-percent disabled.
Who the hell wants that kind of (truth) mythology to occupy cold winter thoughts?