From The Wilderness, Article Twenty Three 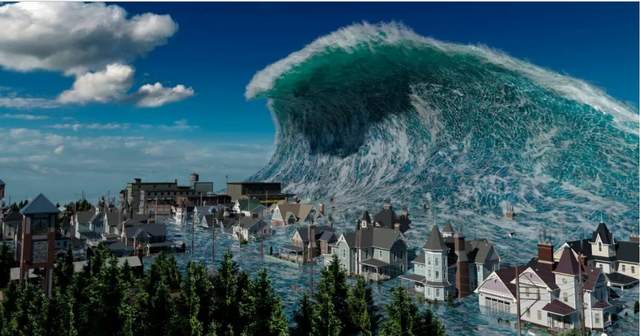 THE DENSITY OF WATER

Water is heavy and dense.  One cubic meter (about three feet on a side) weighs in at over a ton, and water is denser than wood, paper, and just about everything that floats (not hollowed out with air pockets, like ships and boats).  Being a dense liquid, water does not ‘move out of the way’ very easily.  It can be gently or forcefully diverted from its flowing course but large fast-moving amounts of it make for expensive, large and difficult to construct engineering, as we see with edifices like the Hoover dam.  What happens with people and moving water, this vitally necessary fluid that exists and supports all living organisms, can be entertaining and fun, or it can be quite deadly.

The recent encounter of Hurricane Ian with the Florida coast reveals the deadly side of moving water, just as the tsunamis in Indonesia, Japan and even as far back as the one in Alaska have proven.  The world record for a high dive into water is 192 feet and the person who set the record, as well as several of the previous record-holders, was badly injured by his encounter with the water.  The water cannot move out of the way fast enough to prevent near terminal deceleration of a falling or diving person’s body parts.  A woman in the 50’s fell from 33,000 feet but her survival was not due to hitting water.  A part of the plane she was in survived an explosion. That part of the plane landed with her trapped inside it, inside a thick forest and in the dead of a very deeply snow-fallen winter period.  She survived but was crippled for life.

When water is moving, as in ocean waves of either typical makeup and shape that everyone has experienced either in reality or on television, the water in waves is not usually traveling at speeds that might be considered terminal to experience being hit by, or the effects of its passing are short.  A hurricane’s surge, as was proven by Hurricane Ian, and the water moving because of a tsunami, is different.  It is neither short term (surges and tsunamis can actually take many minutes or even hours to travel and fully effect everything that might possibly be in the way) nor slow in speed.  A tsunami can travel as fast as seventy-miles-per-hour as it approaches land (with calculations that such speed can be considerably higher for the moving water in a mega-tsunami).

The world’s human population does not have a lot of respect for the potential of moving water.  It has love for it but not the proper kind of fear of its necessary many times for survival.  The same construction is used to replace homes destroyed by hurricanes and tornados, gambling on the unlikely reoccurrence instead of preparations for the next event.  Homes are built at the water’s very edge all around the world, at great expense and in complete denial that that beautiful ocean or lake just feet away has the potential to kill everyone around it and destroy all lightly assembled human edifices.  Concrete and steel work as construction materials for building survivable homes and buildings near oceans, rivers or large lakes, but they are expensive compared to gypsum and two-by-fours.

We need to respect the water, which also includes the water that comes down upon us in the form of rain, snow, hail and ice.  The earth is a water world.  Seventy percent of the surface area is water…deep water.  Ninety percent of living organisms are made of water.  The air is suffused with water as the air itself around us constantly converts itself into that liquid substance and then back again.