Fusion II, From The Wilderness 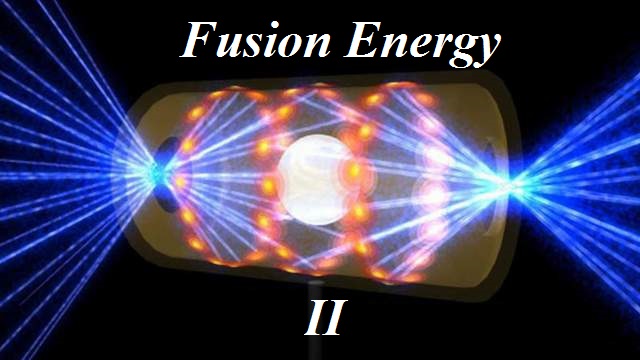 The announcement yesterday about the first real experiment in laser fusion that produce more energy than was spent in producing it was made with no fanfare at all.  The enormity of this scientific achievement was played down at every level. It was not delivered by the President of the United States coming in front of a special live presentation.

Nope.  It was basically killed, and some lower-level functionary, not even a physicist on the project, said it would be decades until this discovery could be commercially available.  Not publicly available, you will note.  That word commercially was then used over and over again when used to describe how this single discovery could set humanity free to explore the universe and control it with comfort and ease.  The word commercial means: “intending to make or making a profit.”

In my first article on this discovery of beyond ‘break-even’ energy creation I wrote of the first energy creation and distribution system called AC electricity.  Nicolai Tesla won the battle over Edison and Westinghouse (even if the movie about this stupendous event portrayed it as just the other way around), thought that his invention, the easy and near limitless and cheap distribution of electricity over long distances, would set humanity free and allow for everyone to have this wonderful energy for almost nothing.  And now comes fusion.

Does anybody think that the richest people on the planet, and countries, almost all involved with providing fossil fuel energy, are going to just sit back and allow fusion to develop and begin the process of energy distribution that might be free to one and all, much less allow for the end to fossil fuel sourcing and distribution at such huge profits?  No, those people and countries are going to try to kill fusion, like they killed the space program (keep everyone right here on earth to be fleeced, please), and only a rising of the public and set us all free.

Now that it is not only possible, but proven, that this form of totally environmentally safe and unlimited in amount power has been discovered and proven it is time for a Los Alamos and the Atomic Bomb kind of program let’s get with it. Why not put a trillion dollars behind this development and bring it to fruition in only a few years?  Save the planet, the seas, the plants, animals and all of it, and also, by the way, travel to the stars?  Whoever develops fusion, by the way, will control almost all of life on into the foreseeable future.  Do we want to let that just go out there in the world?

The production of fusion energy, on a mass basis, will involve the production of tons of near microscopic spheres of hollowed out deuterium.  Deuterium does not appear naturally in our world, at least not on our planet.  Deuterium, to simplify, is a hydrogen atom with two particles at its nucleus, one proton and one neutron, and therefore it has twice the mass of regular hydrogen as we know it.  It’s an isotope of hydrogen, an isotope being merely one of those strange forms of an element with two different states of existence (two particles at its center as well as the kind with one particle).  That is Mr. Wizard’s form of nuclear physics.

The two-particle version of hydrogen, called deuterium, is also mildly radioactive, although that fact means nothing in getting all of its energy out to produce fusion power.  Back in the eighties, when I was working on Project Antares at Los Alamos, we proved that there would be no radiation if we could reach success at going beyond ‘break-even’ in the production of energy from the laser compression of the pellets.  A giant fifty-million-dollar stainless steel containment chamber was discarded from the project and probably sits to this day somewhere on the grounds of that huge laboratory site.

This article is only my small attempt to bring recognition and generate a move to action on this vitally important and so positive development for all mankind.  What a Christmas present it is, if only it will be viewed as such.  A much maligned and poorly thought of man named Lyndon LaRouche started a non-profit company in 1974 called the Fusion Foundation and his adherents were found at airports around the country and then the world.  This forgotten man should be remembered because he was among the first to understand that the true future of the human race would rest upon its ability to crack the nut, so to speak, of how to get fusion power from the elements of the universe.

His dream has now come true, although he and most of his followers (of which I was one) are now long gone.

Do you think Fusion Energy will evolve?