Honor Off The Glory of Russia Cape, Part One 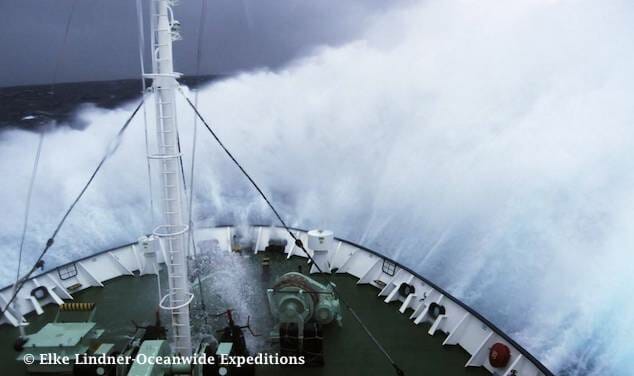 HONOR OFF THE  GLORY OF RUSSIA CAPE

The ship ran hard into the arctic night, beating solidly into each steeply bent swell before being forced up and over, its double steel hull built more for pushing through broken ice than cutting through raging ocean seas. They were one day out of Providenya and making for Saint Paul. The swells blew unseasonably north toward the not too distant pole, the fetch of the wind not having the time or distance to flatten the steep walls of water. Each wave was struck with a blow felt all through the ship, and then a tiny bit of worried delay before a surge over to encounter the next building monster. Progress was slow and ungainly awkward. The ship was possessed of twin propellers but both slaved to a single shaft, powered by a diesel not built to deliver the kind of commanding horsepower the ship needed for such demanding work.

The passengers wallowed inside the ship. The night was stygian and all were below except for a few seasoned sailors manning the bridge. The only sleep was to be found in using nylon restraints, sniggled under to remain as motionless as possible and facedown with elbows spread wide against the wooden sides of solid bunks. Sleep came in bits and pieces, interspersed with worry about the potential of a miserable, cold and painful death that might be coming at any second.

Donald moved slowly along the corridor of Delta Deck, the lowest and cheapest passenger deck on the ship. His progress was slow. The ship would rise, twist one way before falling sharply while twisting back the other way. There was a systematic talent for moving at all. He would wait until the ship was committed at the very top of its rise and before the reverse twist adjusted in, and then he would leap forward, almost flying just above the worn rug, as the ship began its next plunge and twist. And then he'd wait the seven seconds until everything repeated. Fifteen feet at a time, was all he could make, but it was enough. Time was on his side. The night was long, he couldn't and didn't want to sleep and there wasn't a soul anywhere along any of the single corridor running the length of the ship on each deck.

Donald moved forward toward the bow where his cabin was located. It was the cheapest cabin aboard the vessel because it was near the bow, where the ship rose and fell the most and the chain locker was located on the other side of a single thin steel sheet of the bulkhead. The only benefit of the space was that it was twice the size of any other cabin aboard the ship, except the captain's quarters and some of the ritzy high-class passenger rooms located up above the poop deck. The poop deck, French for top deck, was the highest part of the ship's stern. Why that was supposed to be a great place to have a room Donald didn't know.

Mustafah was the ship's purser and the one who'd assigned Donald his cabin. Mustafah hadn't taken to Donald from the very instant he'd stepped aboard back in Nome. Mustafah was Moslem, which hadn't bothered Donald but had rankled the hell out of Mustafah when Donald had made a humorous reference to praising Allah. Donald smiled, waiting for his next leap, at the look on Mustafah's face when he'd said "Praise fucking Allah." The purser had no sense of humor. He was a real-life version of a heavier Peter Lorrie. There was nothing real about him and nothing could be discussed directly with him. Everything had to be preceded by paragraphs of idiotic small talk about the food, the weather and even the animal life in the waters around them. Donald didn't do small talk well and his cabin at the bow next to the chain locker proved it.

"Praise fucking Allah," he said out loud, and then laughed to himself.

With one more bound ahead of him, he took out his room key. He would have left the room unlocked like everyone else on board. It was a tradition they'd said when he boarded, that although all the rooms had keys and locks, nobody locked them as a matter of trust. Donald had agreed since it had taken no time at all to conclude that there was no place to go with stolen goods aboard the enclosed ship. He kept his cabin door locked, anyway, because he was pretty certain nobody else on board had inside their cabin what he had inside of his cabin.

He took the last leap and landed in front of the door latch. Unlocking the lock and getting inside before the next iteration of sea movement took a bit of delicate balance and footwork but he managed it. He was, after all, the ship physician's assistant, deep sea diver, and breakfast cook. The pay was a ridiculous thousand dollars a month, with free room and board, but he wasn't aboard for the money. Or the strange mixture of jobs. He was aboard for something much deeper, darker and infinitely more satisfying.

Once inside the cabin, he locked the door from the inside.

"Unlocked doors, my ass," he whispered.

It took only moments to undress, bouncing from bulkhead to bulkhead, as he tossed piece after piece of woolen clothing off. He climbed naked into the tiny shower, the only big part of it was the high volume and hot-as-you-wanted-it water available from the ceiling mounted shower head.

The ship was beating its way toward St. Paul. Donald had been aboard for a week waiting through the boredom of life at sea to pass by, and the equally boring visit to boring Russia where the entire population of a town had about as much money as Donald was likely to make from his meager paycheck at the end of the month. If he was aboard at the end of the month. Which he did not expect in any way to be.

"The fun begins on the Island of St. Paul," he sang to himself out loud, trying to rephrase the words to fit some melody he knew. But it was hopeless. The heat from the streaming water revived him, however, and the injection he'd stolen from the medical quarters would see him through the night in spite of the high seas.

"Praise fucking Allah," he intoned, twisting both handled valves on the shower wall tightly to off.