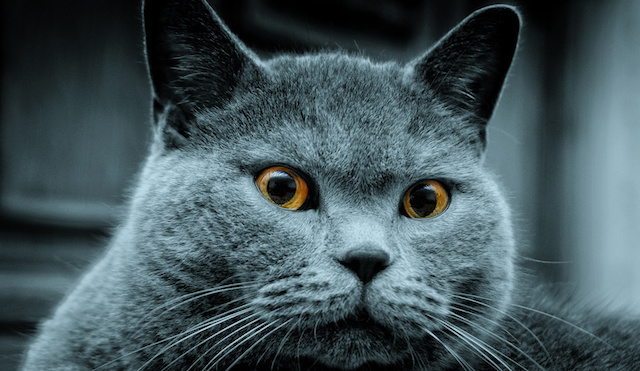 “The cat’s name is Pushkin,” the eight-year-old said. “He’s named after a great Russian who did something a long time ago.” The boy stroked the Russian Blue between his ears, as the cat leaned his head down to pick away at his Fancy Feast. He never ate much, only enough to assure that food was left out at specific hours for him. No human knew whether that was verification regarding the cat’s importance or part of some physical genetic requirement he was forced to demand from lesser tribal members. There was no doubt that Pushkin accepted the small child into his pride with open warmth. His acceptance of the boy’s parents was much more limited, cooler and only given with unwritten by rather specific conditions, many of which only surfaced at certain times. The cat demanded a metal bowl. He would not eat from ceramic or any other material. And he attributed the bowl material responsibility to the boy’s parents. He did that in the one way he had available, outside of his many strange and mostly incomprehensible sounds, by sitting and staring in a definitively direct way.

It was breakfast time and the boy was ready to eat. He’d changed out of his ‘bear suit,’ the sleeved and fully footed costume he wore a variant of every night. It had a zipper running up and down the front, which the boy used with great glee at every opportunity, to the great irritation of his mom. The table was set in the usual way. Five dry cereals were set in the center of the kitchen table with a bowl half-filled with whole milk. The boy was always after sugar so no sugar bowl was ever present. The boy knew all of his mom’s hiding places for the wonderful stuff, but he made no attempt to go after it, at least not with his mom there. He sat down and stirred his milk, as was his custom, to make sure there was nothing else in it. There never was. He did it to irritate his mom, who always said the same thing: “what are you looking for? What are you expecting to fine in there?” The little boy did not smile, except for inside.

The boy looked over at the cat, who had finished taking a few bites of his own breakfast and was done. And waiting. He would not move until the boy gave him the sign to start the game.

The boy took his soup spoon, his only implement on the table, and began tapping it gently next to the bowl. He glanced over at Pushkin. The cat leaned slightly 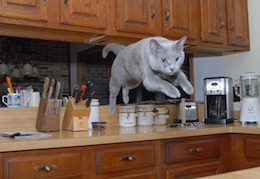 forward, waiting with enthusiasm. Finally, the boy tapped the side of the bowl once, causing it to ring ever so slightly. The cat took three bounds, the last one putting him atop the table on the other side of the cereal boxes.

The boy’s mom yelled, as she always did. “No cats on the table. No cats in human food. You can’t feed cats human food.”

She said the words as she continued getting breakfast ready for the rest of the family. She made no move to come to the table, or shoo the cat from the kitchen. The boy and the cat ignored her. Her yells were part of the ritual that went on every morning in the kitchen before school, and even on the weekends, although it was always later in the mornings on the weekend.

Pushkin tried to go around the cereal boxes to get to the boy’s bowl of milk. The boy was ready. As the cat moved so did he. He quickly rearranged the boxes to form a barrier. The cat stuck his nose between two boxes. The boy closed the gap, gently pushing on the cat’s nose and moving the boxes. The game went on, with the cat trying other gaps and being rebuffed time after time.

“Don’t you two ever get tired of the same stupid game?” the boy’s mother said, shaking her head while readying a frying pan to cook something.

The boy finally decided on what box he wanted. He pulled it from the wall barrier and opened the top. Taking full advantage of the gap made by the missing box, Pushkin eased through and immediately stuck his muzzle deep into the bowl and started lapping at the milk. The boy made believe he was reading the directions on the side of the cereal box.

“You’re going to get cat fever or something,” his mother yelled. “Or the cat’s going to get human fever. Something.” 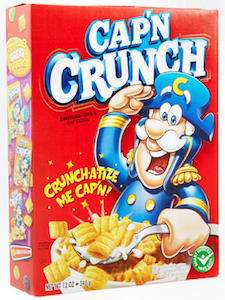 The boy filled the bowl to the top with cereal from the box. Pushkin retreated back through the gap, but the boy didn’t put the box back where it would block the hole. Instead he picked up the spoon and began to eat. The cat hunkered down to wait patiently. It took many minutes for the boy to eat most of the cereal, talking to the cat softly, saying things that weren’t understandable if anyone overheard. Finally, he was done. He replaced the spoon back to where it had been next to the bowl.

Pushkin surged forward again. He dipped his head into the bowl and began to pull small nuggets of cereal out, toss them onto the table and then consume them with great flourish.

“Cat’s can’t eat sugar,” the boy’s mom intoned, having said the same words a hundred times. “Captain Crunch has sugar in it. You’ll poison your cat.”