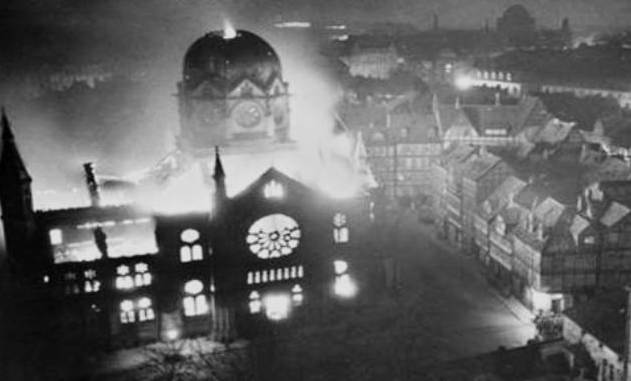 German factions of the Nazi Party worked for years in order to create a way to classify Jews in Germany, and in nearby countries, as something different and less than human. This program to separate, and then denigrate, an entire social group, like the Jews comprised, was a staggeringly successful campaign. One night when things became violent the thugs of White Supremacy swept through cities and towns across the entire country, breaking windows and entering Jewish residences of all kinds. The assaults were likened to the shattering sound of crystal breaking everywhere. The initial sweep was conducted at night. The German words of kristall (crystal) and nacht (night) were combined and became the now familiar word kristallnacht; understandable in the English language, at least to generations gone by. 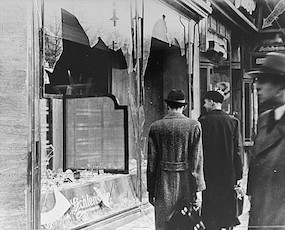 Kristallnacht: Also known as The Night of the Broken Glass. On this night, November 9, 1938, almost 200 synagogues were destroyed, over 8,000 Jewish shops were sacked and looted, and tens of thousands of Jews were removed to concentration camps.

The act of alienating part of the Germany’s population and declaring the Jews less than human ultimately resulted in millions of Jews being executed, millions of Germans being killed in war and a stain being indelibly imprinted into and upon anything considered German on the planet.

The move against the Jews was considered to be racist. Color was a minor part of the description given to Jews. Their facial features were generalized and determined to be universal to the “race.” Religion was removed from any definition of being Jewish. The definition of a Jew had to be deeper. What we see in cultures across the world today is not much different. Through history the same kind of alienation has been attempted against others. The “Japs” in WWII, the “gooks” in Vietnam, the “Huns” in Germany and many more. Race is supposed to be indicative of color but it’s not really. Orientals are not really yellow. American Indians are not red, not all black people are black, and few white people are really white by any means. But racism is not really about the color of one’s skin. Race is a way to isolate an individual from another, and to also isolate a group. That isolated group then can be minimized, denigrated and eventually denied ownership in any number of ways that the people from another group victimizing them might want.

This new racism, like the old racism, is about competition and the generalizing of a competing segment of the population in order to get rid of those competitors. Race is not a truthful subject, and neither is this vastly cruel and harsh competition for ownership of everything on the planet. Racial, and other forms of competitive naming, excluding and even executing of other competing groups is never discussed as being just that. The group being denigrated or attacked is always considered to have caused the action being brought against it.

Allele Property Ownership stems from the word allodia, which in old English times meant “owned by the crown and free from such obligations as rent or services due to an overlord.” Everything early on was owned by the king or an authority similar to that. The ruling authority then passed on down permission for more common people under rule to hold properties for a fee. That process morphed into the phrase ‘fee simple,’ used today to indicate owning real estate free and clear from all other claims, except for those of debt holders and taxing authorities. This property system, extending over into almost everything a human being might use, hold, encounter or even be in or on, has permeated every civilized culture on earth. When you are born everything is already owned when you get here. Your ‘ownership’ of anything at all is determined by what property your parents and other relatives are going to cede, assuming you survive long enough to somehow gain your own property.

Racism, the kind being illustrated recently by what happened in Charlottesville, is an example of this kind of “typing” in order to exclude, designate and denigrate. White Supremacists (and they are not the only racist groups around), seek to gain more stuff of all kinds, by taking it from others who’ve been gotten rid of for a multitude of reasons, none of which include members of the denigrating and dominating group admitting anything close to truth. Racism is nothing more or less than an anthropological tool to ‘purify’ those in one power base or structure. “Purity” is always the haven of all racists. That there is no reality to such arguments has no meaning. It is their argument and they will kill you over defending what it is and isn’t. There’s an expression: “you can’t fix stupid.” There should be an expression that follows that, as well, “you can’t tell stupid that it’s stupid, or stupid will kill you.”

The next time you look at a member of a minority of any kind, from the disabled, to the poor, to belonging to a different “race,” remember your own reaction to any feelings you might hold as to what you might want or have, and what you might have more of, or any of, if others didn’t already have it. It is much easier in this grand competition of life to eliminate the competition, rather than to try to out-perform it.   When you see a member of any other race, and racism is primarily a function of seeing, then think about the fact that if you are feeling negative about that person, or the group he or she might be from, then you may well be thinking either about what they have that you might want or that they might be after something you already have. The Germans minimized, denigrated and eventually dehumanized the Jews. Don’t ever forget that after they killed them they took all their stuff, up to and including fillings in their teeth.