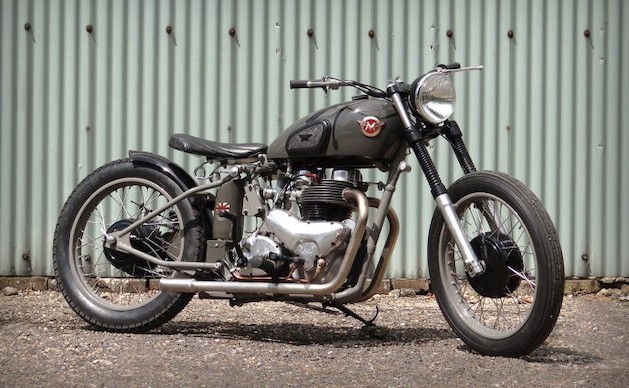 The bike wasn’t much, certainly nothing that any islander would buy.  Kam counseled with his dad about getting the Harley but the old man was no help.  “Sell the damn thing to one of those dumb Haole’s down at the base,” was all he said.  Without selling the Matchless Kam couldn’t make the down payment on the Sportster.  It would take him another year of waiting tables at Trader Vic’s to come up with the money.

“Don’t have nuthin’ to do with the Hoales at Kaneohe,” his best friend Lee advised him.

“They comin’ to the island from those wars.  They all crazy.  Crazier than regular Haoles, I mean.”

Kam thought about it for a couple of days.  The Caucasians from the mainland had come hundreds of years earlier to steal the land and take everything over. The house he lives in with his parents was leased from the Castle family.  Those Haoles were direct descendants of one of the preacher families who’d like the islands so much they’d simply taken them.  But working at Trader Vic’s had loosened Kam up a bit.  The tourists who came to Waikiki were not bad.  Some drank too much. Some acted out, but by and large, they were okay, if you could get past the thieving some of their numbers had done so many years before, which neither his Mom or Dad could.

But he had no choice, really.  Either the Matchless sold to some service guy, and they weren’t all Haoles, or the Harley would remain ephemeral…except for the ones he saw touring around the island every Sunday, driven by guys he’d gone to school with but mostly didn’t have much chance to see anymore.  The Harley would change everything. He’d learned that you couldn’t hang out with anybody riding a Matchless. The English bike had been built in England sometime during the second world war.  It’d never made it around the island once without breaking down.  Kam had a garage full of spare parts to prove it.  Harleys never broke, they just leaked a lot.

Lee came with him to keep him company outside the main gate at Kaneohe.  The Marines looked at them sitting on the grass by the bike but, since they were outside the base property, they could do nothing.  None of the cars leaving Kaneohe stopped, or even slowed to study the ‘For Sale’ sign hung from the bike’s handlebars, and the foot traffic was sparse to non-existent.

Late afternoon came and went, Lee departing with the falling sun.  Lee worked in the kitchen of the Royal Hawaiian on the other side of the island, not far from Trader Vic’s, but he had to be there promptly by four a.m. every morning or else.

One man came through the gate as Kam was folding his sign up and getting ready to kick-start the difficult English bike.  Kam decided to wait until the Marine passed by so he wouldn’t take note of how many times it took to kick-start the thing, but the man stopped.

“You selling that thing?” the guy asked his English rolling from his mouth all buttery.

Kam studied the Marine for a few seconds before answering, finally figuring out he was from the Deep South.  His pronunciation was called a drawl, Kam knew but hadn’t heard anyone use it since he was an elementary school kid.

“Yeah, if you got cash,” he replied, waiting for the Marine to walk away.

“How much?” he asked, without hesitation, surprising Kam.  The Marine was not much older than Kam was.

Kam had only recently dropped out of high school, unable to compete with the service brats and rich people’s kids who’d taken over the institution.  His resentment at Haoles suddenly overcame him.

“Don’t know if I want to part with it that bad,” he replied, giving the Marine his best ‘stink-eye.’

The man ignored him, walking around the bike and examining it closely as if Kam wasn’t sitting atop it.

“Two thousand,” Kam said, finally, doubling his price because the Marine was Caucasian.

“Kamaina price,” the Marine shot right back, “and it better be good because those tires are shot and the gas tanks dented.”

Kam needed nine hundred, and even at that, he was going to have to sign a financing agreement to pay a monthly amount.  Fortunately, his age and credit didn’t matter to the Harley dealer as there was no place to escape on the island.  But he didn’t like the Marine. The man seemed too self-assured and too ignorant to pick up on Kam’s obvious hostility.

“Nine hundred.  That’s it. I’m getting a Harley and I need that much to cover my down payment.”  Kam told him the truth, so he’d simply move on.  The light was beginning to go, and the Matchless front light was out.  He didn’t want the Marine to take note of that in addition to the other things he’d already spotted.

“I’ll take it,” the man said, instantly.  “I’ll be here at this hour tomorrow.  If you show up, we got a sale partner,” he said with a great smile, pronouncing the word ‘pardner.’  He held out his right hand.

“I’ll be here,” Kam responded, ignoring the smile and the hand.  “Cash, no hundreds.”

The Marine’s smile died, and his hand went down, almost if he wasn’t quite used to such treatment.  After another minute examining the bike, he walked away toward the main road.

Kam waited a good fifteen minutes to begin working on the bike.  His right leg ached by the time the Matchless fired up.  He drove it as fast as he could down Kamehameha toward His house in Haiku, trying to beat the dying light.

Kam got the bike home without it quitting and without getting killed by some blind tourists.  His father was unimpressed with the sale.  “Told you to sell it to some dumb Haole.  Not that he’ll show up.  Shoulda got a down payment. If you’d finished high school, you’d known that.”

Lee was more supportive.  “You gonna have a Harley by the weekend Bra!”  They knocked their knuckles together in celebration, both laughing.  “The Haole’s a Marine Bra, and Marines don’t lie, even the Haole ones.”

They both waited at the gate the following afternoon.  Lee drove his ancient small bed Toyota pick-up so they’d have a ride if the Marine took the Matchless on the spot.  Kam had the title ready to sign over.

The Marine walked past the gate.  No sweater covered his rank.  He was a staff sergeant, Kam realized.  No mere recruit.  And a young staff sergeant.  Kam didn’t like the man even more.  “A high school graduate, probably some college too,” he whispered to himself.

“You got the money?” Kam asked, slouched across the body of the bike.

“Yeah, but I got some questions,” the staff sergeant replied.  “What kind of bike is that and where was it made?”

Kam answered, but the Marine was not done.

“Where do I get it serviced?  And where can I get parts?” he inquired.

Lee started laughing.  “Parts and service, Bra!  For a Matchless?  You gotta be kidding us,” he said, his laughing growing in intensity.

Kam frowned at his friend.  The man had the cash.  All they had to do was get the cash, sign over the title, and get the hell out of there.

“No service.  Nobody on the island except Lee and me knows anything at all about the bike.  But I got a garage full of parts.”  Kam waited after saying the words, hoping Lee had not blown the sale with is derision.

“I only have nine hundred.  I can’t afford to buy the parts,” the staff sergeant stated flatly, making to turn and walk away.

“Deal,” the Marine replied, holding out his hand once again.

Hesitantly, Kam shook with him, noting the man’s restrained strength.  Kam squeezed a bit harder to let the Marine know he was no weakling either.

“I’ll ride the bike.  We’ll go to your garage so I’ll know where to come on payday,” the sergeant said, walking toward it.

“Hard to start,” Kam blurted out.

“Yeah, I know.  I watched you from the hedge over there.  Magneto’s shot.  Hope you got a spare.  We’ll put it on next payday, along with a headlight and some tires.”

Kam worked at starting the bike.  Surprisingly, it fired up on his twentieth jump down on the lever.

The garage looked like termites would finish consuming it in the next few days, but the inside was immaculate.  Kam proudly showed the Marine, bin after bin of parts, pamphlets, and books.  “I ordered them all, over the years, from England and from collectors on the mainland.  Someday the bike will be worth real money, they said.”

“Yeah, I don’t doubt it.  Nine hundred bucks is a lot of money, but everyone on Oahu wants a fortune for a real bike.”  The Marine counted out nine hundred dollars in twenties from a credit union envelope. “You don’t seem real fond of selling the thing.  I thought you wanted the Harley pretty bad?”

Kam counted the money three times and examined the bills before leaning down to work on the title.

“He’s Hawaiian,” Lee said, into the silence.  “He hates you Haole’s for taking his land and everything else. He’s a sovereignty warrior.  Not like me. I’m half Chinese and half Japanese.  I don’t like Haole’s like you, but I don’t hate ‘em.”

The Marine stared from one man to the other, all three stilled by Lee’s candor.  Kam held out the title with one hand.

“The names Warren Earl,” the Marine said, his voice gone cold. “I was raised in a part of the country where people think like you more than not.  I understand it and I know how to deal with it.”  He took the title from Kam’s outstretched hand.  “I need a ride back to the base.  We don’t have time to change the headlight and I don’t have the money to pay for it yet.

“I’ll take him,” Lee replied, whispering to Kam as he walked by him “they have Hawaiians back where he was raised?”