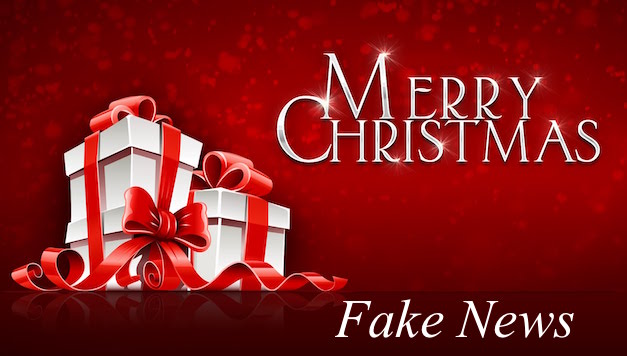 Is the News declaring Merry Christmas?
According to the same news that brought us all the fake news before this last election, preceded by huge loads of fake news about the wars we’ve been involved with lately, the message now is that Donald Trump will just be another U.S. president, sort of like the rest.

There will be hearings and the democrats will be able to balance whatever the republicans do. There are now four vital parts to the U.S. government and they are all republican to the bone. The Executive, the Congress, the Supreme Court and the Mass Media. That includes both houses of the Congress. There are now a majority of states that have republicans occupying all parts of state governments, just like in Wisconsin. There is no advancement of anything in Wisconsin. The state has been dead still for the development of anything since the republicans took over. Maybe that will simply be the worst of it on the national scene too. Maybe there will simply be a load of aging white male bellicose chatter with the other nations of the world.

At home there will be mostly nothing except for the oppression of women (which most women don’t seem to mind that much) and the beating down of anyone of color or anyone not an avowed Christian. Since the shift in economics really got rolling under Reagan and then Bush Jr. the one percent wants nothing to rock the boat. It might be best to study the Dark Ages, when the world’s cultures were not destroyed but simply parked in the doldrums for hundreds of years. The life of a peasant wasn’t supposed to be that bad. Maybe most people should just get used to it. And oh, like in the Dark Ages, you won’t be able to get together with anyone to do anything about it. But it’s Christmas, and Christmas is a time to be kind and generous toward your fellow human beings. Be that way.

Over time and after enduring enough pain one can learn to smile through it.