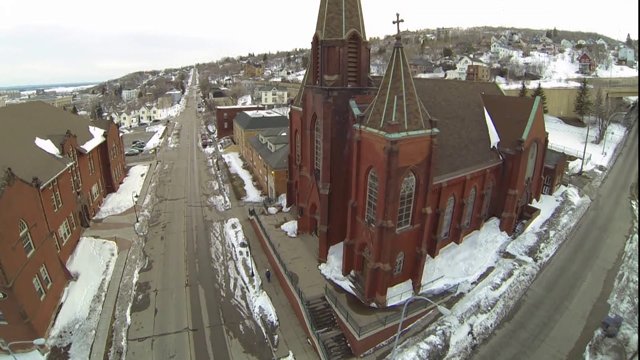 Fifth grade at Sacred Heart Academy in Duluth, Minnesota wasn’t much different than other Catholic Elementary Schools of its time, except for its location high atop a hill above one of the coldest developed areas in the United States. Other places in Minnesota might get lower temperatures but no developed area on the continent could boast more miserable temperatures when combined with winter winds. Twenty-five below zero with a thirty-five mile an hour wind was considered cold during that winter of 1955 but nothing truly extraordinary. Today, the wind chill factor, not invented back then, would be somewhere around ninety below. Cold and miserable enough to have to take the car battery inside very night. Cold enough that car doors could not be closed fully because the grease would freeze and they could not be opened again without a blow torch.

To me, the worst thing about that kind of cold, other than that I’d transferred in from Honolulu, Hawaii the month before, was the frost. The frost covered all of the school room windows, not just the edges of the glass. By mid-morning, the warmth and moisture of students and teach inside the room caused the world outside to become unavailable. The world outside those windows was where my mind truly lived in those cold early days of my life. Anything and everything went on out there without limit or harsh discipline to hold it back or color it bleak and black. Like the color of the habit worn by my Catholic Nun teacher. Aside from the black robes and pointy black habit top she wore a white thing that jutted out from under her chin, as if trying to imitate some strange version of clean platypus. She was not to be laughed at, however. She had a custom-made pointer that stood in the corner of the front of the class room. We all knew about that special pointer because very occasionally it was used. Not for pointing at anything. The pointer was made from an old cut off broomstick. The tip had been specially sharpened to a refined deadly point. The tool was seldom used but the few time it was were terrifying and memorable for life.

It was Tuesday morning two weeks after Christmas. The worst time of the week. Sister Agnos, pronounced “agony” behind her back by the students, hated 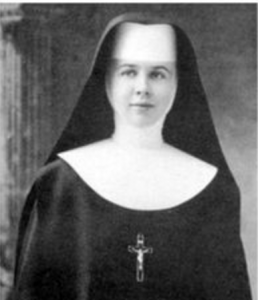 Tuesdays because that was the day when her totalitarian rule was interrupted by visiting teachers, priests or even the principal. Tuesday was, for unknown reasons, the day when other people of higher power invaded Agony’s classroom and spoke to her students. All of the visitors, without fail, were friendly, caring and smiling, the opposite of Agony. And it wasn’t just the opposition of her personality and demeanor that got to her. No, she hated how her student body reacted to these interrupting visitors with laughing happiness and undisguised glee. Tuesday, before and during the arrival of the visitors, life in Agony’s classroom was livable.

After the visitor’s left the hammer came down. Darkness, bitter berating and strict accountability for unaccountable acts while the visitors were present was meted out.

One Tuesday was touted to be the best of all when it was announced that the monsignor of the district was coming to visit our class. His name, Father Mayday, was pronounced as a whisper by everyone for some reason. Since the windows were frosted over, and the few students who lived outside like me were bored to death unless frightened in terror of Sister Agony, waited for the monsignor’s visit with bated breath. A monsignor was above the priests who were way above the nuns, even the mother superior of our whole school. Above a monsignor was a bishop, who was only known by us from books. Not real. The monsignor would be real.

Sister Agony gave specific instructions before the monsignor arrived. It was early afternoon, right after lunch hour. Her instructions had to be written down. The instructions had to be read aloud and then torn up and collected to be put in the trash can out in the hall. Finally, a short test had to be passed by all the students with the instructions written in true or false arrangement. The answers were all ‘true,’ which was whispered down the aisles to us by the classes smartest girl, Martha, who sat in Sister Agony’s favored front seat closest to the door. We all passed.

I would be ten years old in three months. I knew a lot. I’d been to Michigan, Illinois and Hawaii. I’d sailed Lake Michigan in a skiff off of South Manitou Island, herded wild cattle and even had a pet goose for awhile. I was miles ahead of the rest of the class, except in possessing warm clothing or any understanding of how such an awfully cold place could considered so special by all the rest of them. The other kids not only loved Duluth but they loved it in winter, and the worse the winter the better. Neither Michigan’s island life or even Northern Illinois had prepared me for Duluth. And the Maryknoll nuns, just come out of Japanese prison camps had been tough in Hawaii, but they had not been serial murder tough. Serial murder tough specializing in only children, as in Sister Agony’s case. 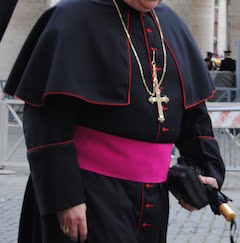 At one in the afternoon, precisely measured by the classroom clock that ticked loudly all day long, Father Mayday entered the front of the classroom unannounced by Martha’s desk. Life stopped in that room that day. Father Mayday wore a black cassock, with a bright red band around his ample waist. His floor length robe, open at the front, was of pure gold and he held a round white hat in one hand that glittered with little silver bits entwined all over its surface. Superman could not have made a more astoundingly dramatic entrance. And then the man smiled. We all smiled back at him, instantly. He walked toward Sister Agnos, who stood in front of her blackboard. Every step he took forward was matched by a step she took backward. In seconds she stood erect with her back against the cold west wall. Father Mayday ignored her presence, like she wasn’t even there. When he reached the very center of the room he turned.

“My children,” he said, spreading his arms to take us all in. And in we went.

I am convinced that I was not the only one failing to breath, waiting for what the great man might say.

“Let me tell you about life and love of Jesus Christ,” he went on, his great smile growing even greater with the mention of God’s only son.

The monsignor spoke for half an hour. It seemed like five minutes. Finally, he stopped and his face turned serious.
“I’m sure you have questions,” he said, pausing for the first time.

Nobody said anything. Instruction number one on Agony’s list was “you will not ask any question at all, no matter what.” Agony was not to be taken lightly and I was not the only student to instantly glance over at the deadly pointer standing alone in that corner by the front door. We said nothing and there were no hands raised.

“I’m sure you’ve been told not to ask questions and waste my time,” the monsignor said, as if reading our minds. “Let me tell you that whatever you think, it’s not true. You can ask any question of me on any subject and you will not be punished in any way. Isn’t that true, Sister Agnos?” he said, not turning to look at her.

“True,” Sister Agony forced out in a small voice, but it wasn’t enough.

“No one will be punished, of course, father,” she replied. “You can ask any question you want,” she said to us, smiling a sick smile, the first smile any of us had witnessed fleetingly fly across her face since Christmas.

Hands went up. The questions flew at the monsignor. I was surprised at the questions because the answers were all in the catechism we studied and memorized each and every day. “How do we know God? Why did Jesus Christ come down from heaven,” and more. They went on and on. One moronic question after another. Finally, there was a small breathing space. I put up my hand. The monsignor saw it and pointed at me. I saw Sister Agony give a small but violent shake of her head out of the corner or my eye, but the monsignor had given us all dispensation.

“You, with the tan,” the monsignor said, laughing as he said it.

I was nonplussed for a second but then decided to simply ask my very important and vexing question I’d never asked anyone in my life before.

“Father, why was everything already owned when I got here. Why was there nothing left for me?”

The bell rang, but nobody moved. The bell stopped ringing, but still nobody moved. After about ten seconds Sister Agony recovered first.

“Everyone out on your ten-minute break. Don’t go far. Thank you for coming monsignor,” she finished. The monsignor looked surprised at losing control of the class. The students jumped up and made for the doors. Sister Agnos moved quickly. She walked behind the monsignor, as if to help students get out the front door but she didn’t stop there. I hadn’t move from my seat near the back of Martha’s inside row. Agony came right at me, leaning down as she passed on her way to the back door.

I didn’t see the monsignor leave and I didn’t learn anything in the next school period. I spent the entire time in the cloak room, waiting for whatever was coming. I reflected on the question I’d asked the monsignor. It took me almost the whole hour to realize that there were questions that should never be asked. You either come to know the answer or you don’t. There’s no other human on the planet, no matter what his or her position or life experience level is, who can answer it honestly for you.

Sister Agnos came eventually, but without the pointer. She simply stood at the end of the cloak room staring at me. After a few penetrating moments she gestured for me to leave. Somehow, she knew I’d gotten it. I attended the next period and got through the rest of the school term without having a problem with her again. I never asked that question of anyone again, either.