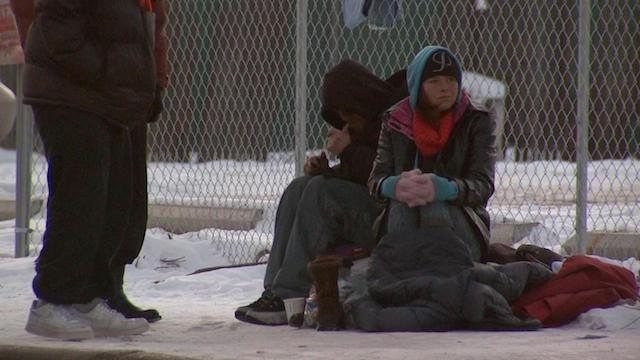 Holy Nights in the City of Denver, Colorado,
The police there have been confiscating blankets from the homeless under a new law that allows them to take away everything homeless persons possess and destroy it. The new law is to prevent illegal camping inside the city limits. Of course, it is really a law to get rid of the homeless. Due to complaints and threats of a federal law suit, the mayor is now instructing the Police Chief to leave the homeless with their blankets against the freezing cold.

The Chief of Police of Denver, Robert C. White, indicated that, although the patrolmen have been confiscating the blankets of the homeless: “they never intended to remove anything from the homeless people that might keep them from freezing.” Why is a Police Chief not fired for making such a comment? Why is not every patrolman who took a blanket from another human being in freezing weather conditions (last night it was four degrees below zero in Denver!) not fired on the spot? Why are the patrolmen who did this not themselves arrested and charged?

Why has my country turned into Nazi Germany overnight, and myself and the people I most identify with being issued large capital “J” letters to be worn on our chests?

This is Christmas. It’s supposed to be about the coming of someone that would relieve this kind of awful behavior and suffering. When the people of Denver hear of this story what will they do? What should a city do when it’s own police department is one that would have been damned by Christ in an earlier time. Maybe that phrase should be required to be painted on every police cruiser in that city instead of ‘To Protect and Serve.’ Denver Police Department’s new mission statement; “Damned by Christ!” I am listening to “Oh Holy Night” on the radio right now. One of my all time favorites for this season. Where have our holy nights gone?