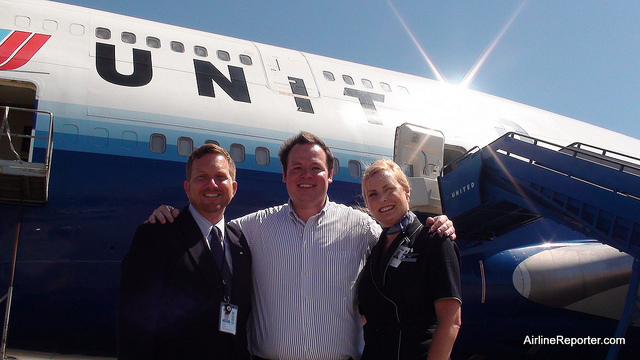 I love to tear United Airlines apart. I've been enjoying myself with that diversion, when I travel, down through the years. I think United was ready for me on this trip, however. The plane was half an hour late getting off the ground so I went forward to complain. I met two flight attendants, Jason Hawks and Rose Hawkins. They turned out to be 'roady' flight staff, in that they've both been with United forever. It also turns out that the flight was delayed because the crew had a hard time making a comfortable place for a kid in physical trouble taking one of those "Make a Wish" organization flights. They finally moved him into first class and had people vacate and move around to accommodate him.

Everyone happily went along. I tucked my tail and sat down, thinking good thoughts about my only airline, and wondering what I could find bad to buffer so much good. But Rose and Jason were not done with me. They called me forward when the long flight settled in, and then toyed with me. I have been laughing and smiling, against my will, during and ever since. They keep refilling my coffee (I drink a lot) by bringing new cups and replacing the old cups about every twenty minutes. I'm dying here. What is this? So, I'm writing them up in hopes Mr. Munos will see this, of which there's no chance. I'll write a hard copy and hope that the complimentary letter finally comes back to haunt them in a wonderful way. I can write the thing perfectly, I think, without saying anything I shouldn't. So, the air has been clean and smooth, the plane too cold, but the people so very warm.

Untied's coming a long way in its attempt to become more human, humane and downright friendly.

Finally, Mr. Munos is going to make my airline live up to its commercials. That tune they play in the corridor down under the tarmac, that runs between concourses B and C, Rhapsody in Blue, by Gershwin, is somehow bouncing through my head now as I get ready to land in Honolulu. What some really good behavior can do to change a mundane travel day into a thing of brightness and great grand good cheer. Thanks United. Damn it. I will try to find something crummy to report on when I take flight 218 back home.

The photo isn't me and them because my phone was off, but you get the idea...