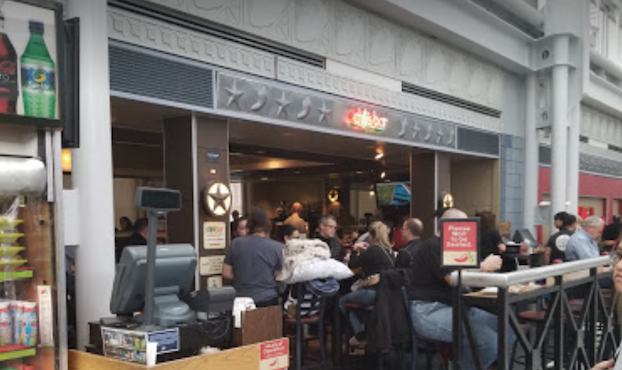 Not much traffic at O’Hare, what’s wrong? A guy walked up to the skycap just before me and then stopped, to let me go first. I demurred and thanked him. How nice to start the trip out that way. The skycap was totally cool and quick, for a twenty, of course. I was checked in, just like that. Then TSA. I got my Pre-Check back, don’t know why but I’m not asking anyone about it. Slipped through without the hassle of saying no to the ‘arms up’ machine. Got all my stuff with two hours to kill. Went over here to Chili’s on the B concourse.

Cold air-conditioning for my aloha shirt. Really cold, but not as cold as the woman seating people. Ice for her. You sit where she wants you to sit, although the place is empty. I wanted a seat on the ‘fairway.’ So, I’m way in the back. That’s it, and please remember I’m in an airport so I could forget talking back. Cop coffee. Four bucks for burned excrement. Takes me back. Icy service, icy windy air-conditioning and shitty coffee….I am an American in America and no wonder we American’s need a wall…to keep us in.

United today. Not flying on miles because I needed a few to be a Silver Premier Club member again. Oh, I won’t be Silver (should be Sliver) until the trip back because they don’t credit me until I’ve flown, even though I’ve paid. What does that have to do with anything? So, I’m a germ, instead of merely a gerbil. Above me is gold, platinum, 1-K, and then the frightful royalty of the air called Global Services. Even with tons of miles and money, I don’t think I am lily white enough to be Global Services. Or lily yellow, since so many of ‘those people’ are of Chinese descent…seemingly unless they have one of those really great disguises I saw in an Arnold movie about Mars once.

So, I am nobody going to Hawaii in the steerage. The Russian woman waiting on me, Tara, demanded without saying it that I order something other than the excreble stuff to drink. I ordered two eggs over easy and sausage. She wanted to know if I wanted all the other junk that came with it (her word!). I said no so she said that I have to pay for it anyway. I told her to send the rest of the stuff to the kids starving in Korea, which she did not get at all. She looked at me like she thinks I’m a smart ass, or worse. But, she’s Bulgarian, so I wasn’t expecting a warm water bottle and fuzzy hot towel.