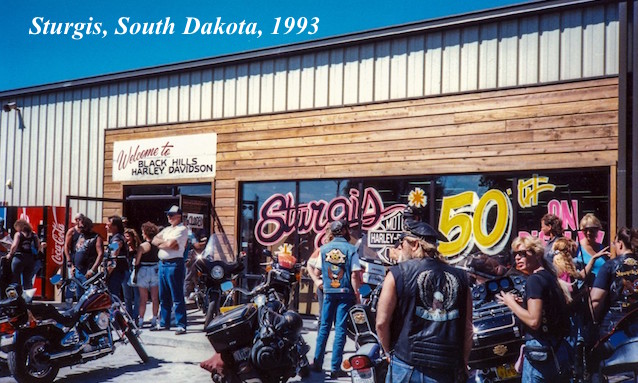 It was 1993, and I was headed from Albuquerque to Madison, Wisconsin. I was driving a 1989 Range Rover with my family. After half the second day on the road we came upon flocks of Harley bike riders going the same way. Tens, hundreds and then thousands of them. We wondered what the hell was going on until we arrived at a town called Sturgis, South Dakota

It was a hot August Sunday. We rolled up the windows even though the air conditioner wasn’t working. We locked the doors. The car was acting up, and had been doing so for miles. I pulled into a gas station in the center of the Harley-filled town. It was closed. The Rover started smoking and quit. There we sat, wondering what to do. One of the biggest and ugliest of the Harley guys parked all around us walked to my window and knocked with one big knuckle. I rolled the window down a couple of inches.

“Your wagon’s smoking,” the guy said, pointing at the small cloud forming over the white hood of my Rover.

“Yeah,” I said, before asking him about the possibility of finding an auto repair shop.

He walked out in front of the smoke cloud. I looked at my wife. What could we do? I popped the hood. The man, and some of his buddies, disappeared under the hood. A few minutes later the big rider reappeared.

My shoulders slumped. I not only knew the Rover wasn’t going ten feet without a new head gasket, a big mechanical operation, I also had about two hundred bucks on me…way short of being able to pay anyone to fix it.

The man looked at me over the top of his big ugly sun glasses. It was like he was reading my mind.

“We’ll tear it down and have a look,” he said, before walking away and disappearing under the hood, not waiting for an answer.

“We’re pretty much screwed,” I breathed over to my wife.

Her face had gone white and the kids in the back seat were dead silent. Noises began to come out from under the hood. I had to take a look. I told my wife to lock the doors behind me, and then got out. I moved to the front of the right fender. Four guys worked away at taking things apart. they made believe they didn’t know me. I watched them work at destroying what was left of my car, fascinated by surgical-looking tools with the name “Snap-on” etched into their surfaces in red.After twenty minutes the big man who’d first talked to me looked up.

“Your right head gasket’s blown, like I thought,” he reported, wiping his hands on a paper towel a beautiful woman in leather brought to him from behind his back. I tried not to stare at her. The big man smiled, but said nothing. “You want us to fix it?” he asked.

“It’s a Range Rover,” I said. “English. You’ll never find a gasket within a hundred miles.”

The big man laughed. “Motor’s an Olds Cutlass thing from the eighties. Rover bought the rights. We just need an Olds gasket.”

I felt a stirring of hope, wondering if my super expensive Range Rover really had an old design Olds engine in it.

“Nope,” the big man said. “But the owner is one of us and he’s right over there.”

He pointed at a man eating a hot dog from a nearby charcoal broiler set up in the gas station lot. The big man whistled one of those two-finger whistles and the hot dog guy walked over. I didn’t hear the conversation between the big biker and the parts guy, but in only a few seconds the parts guy was gone on his Harley. The big man told me get my family out and have a hot dog. I knocked on the glass and argued my case to my wife. They got out.

We spent the next two hours having hot dogs, drinking beer and talking to some of the most interesting men I’d met in a long time. The big biker finally came over and said it was done, and asked for the keys. I tossed them to him. He went over and started the Rover. It hit on the first go and then proceeded to hum like it never had. The big guys friends all laughed. We stayed for another half hour, before heading out toward Madison. If you think you know Harley riders and you’ve got a pre-disposed idea that they are not nice….well forget it.

They would not take my money. Fred Worth, the big guy’s name. Still remember it. Worth a fortune. I always stop for Harley riders if they look like they might need help. I bought a Sportster but have never ridden it. I like the look, the feel, and I can sit on it and make believe I’m really one of the real deal guys.