Reflections From Hawaii, 2018, The Whales are Back 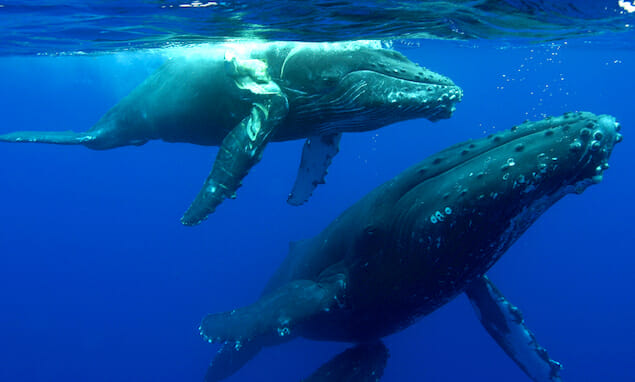 The whales are back.

For two nights the coastal waters grew silent, the songs and cries of the whales went to places where humans have no clue. The great unknown under the sea remains just that, for the most part. Look up "crying whales offshore" on the Internet and you'll find nothing about what I've been writing about for a couple of weeks now. Whales coming in nearshore to leave their young while they swim off to do things? Nothing.

We don't know what's going on down there but I've come to understand physically and mentally that there's a lot going on. For two days the waters ran brown just offshore. The runoff from a huge tropical storm allowed for a tremendous amount of runoff from all the mountain streams and rivers. The water around the island, for a couple of miles out, was a roiling mass of rather lousy looking wave-tossed water. The whales didn't like it, and so didn't follow their typical pattern of coming in and close and doing whatever it is they do when they come in close.

But they are back this morning. The 'daycare' center re-opened, and the little ones are out there wandering about being told to mind their whale manners and play with blocks, or something. My imagination has to fill in a lot of holes here. But it doesn't have to fill in holes when it comes to being a receiver for the comforting but, at times, agonizing cries of these communicating cetaceans. They are out there right this minute and they are talking to each other and letting me listen in.

And their 'chatter' is a big improvement over the national news.

A Few of My Hawaiian Friends