The clock on the wall in the Plaza Restaurant in the center of Santa Fe, New Mexico, the loveliest capital city in America by far. A real beating heart, the central plaza. Real native adobe architecture and construction styling. Nothing in the city is taller than the church steeples that were never finished. By law. Parking on city streets is a buck an hour and the fine for going over is sixteen dollars. Sensible. The food is stunningly local, of high quality, cheap and the restaurants serving it are all over the place.

The place is like the clock, sort of stuck in time. Back there somewhere still stuck if a place of small town comfort. McFly would be perfectly acceptable riding his skateboard around the square, except in Santa Fe he might likely be Hispanic! Street musician’s abound. Museums are all over the place from the Georgia OKeeffe to the anthropology and folk art and more. All within ridiculously short distance walking.

It’s all at seven thousand feet so walking is kind of slow and you drink a lot of water, or whatever.
Santa Fe is real America at its finest and kind of still a secret in many ways. 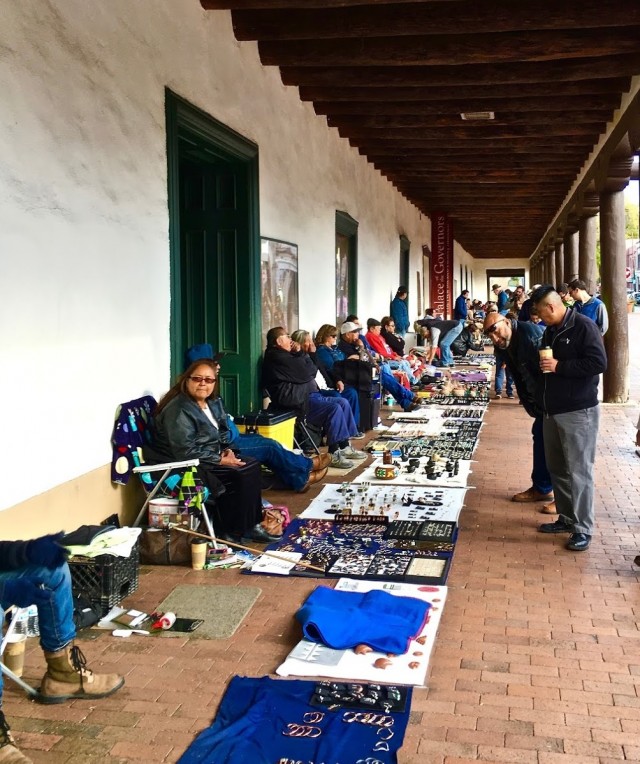 So you wake up mid day one day and wander into a store downtown. How do you know you are in Santa Fe New Mexico without having to get your bearings outside? Well, you approach a salesperson for the store you are in. If you are in Santa Fe then you don’t have to encounter the sales person or ask any questions. All you have to do is look at him.
Here is Orren. He’s a salesman for Santa Fe Dry Goods Company located on the southeast end of the main plaza.
He stands there smiling and looking all Santa Fe, which is to say totally free to be whatever the hell he wants to be and to dress however the hell he wants to dress…and then to wear a huge smile while doing it. 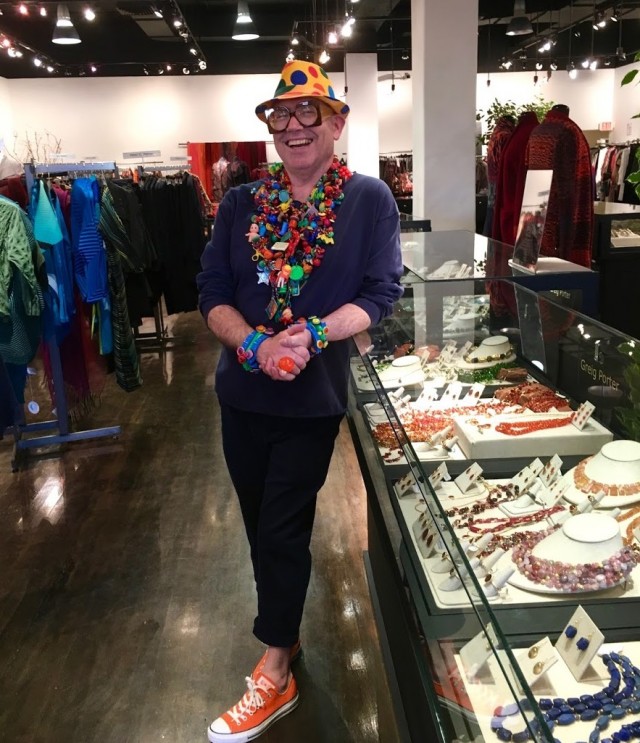 Orren and his great smile at Santa Fe Dry Goods.

Back in ’95 I wrote a story for a contest in the Santa Fe paper held during the holidays.
“Christmas Canyon”.
About two homeless men living under a bridge spanning the Santa Fe River off Canyon Road. One was gay and the other straight. The gay played a violin and the straight a trumpet. They’d kept one good outfit each which they wore to play on Canyon Road like is done on Christmas Eve up and down the river every year. They played that night.

The straight guy’s family found him playing after years of search. The gay guy stayed under the bridge alone after his friend left. There was a bit more to the story. A Navaho girl won with a story about cookies. Only years later did I go into the paper offices looking for some other data. A woman asked me if I was ‘that’ Strauss. It seems that my story created a huge division on the paper’s staff.

One arguing that the story was terrific, timely and poignant, the other that homeless could not be advertised as being allowed in Santa Fe. You know what side won. I am still proud that my story could cause such polarized debate and be remembered. Better than winning. I finally got a photo of the bridge today.

Here it is. Yes, the two guys were real guys and yes they lived under that very bridge, and yes….
There was more to the story. 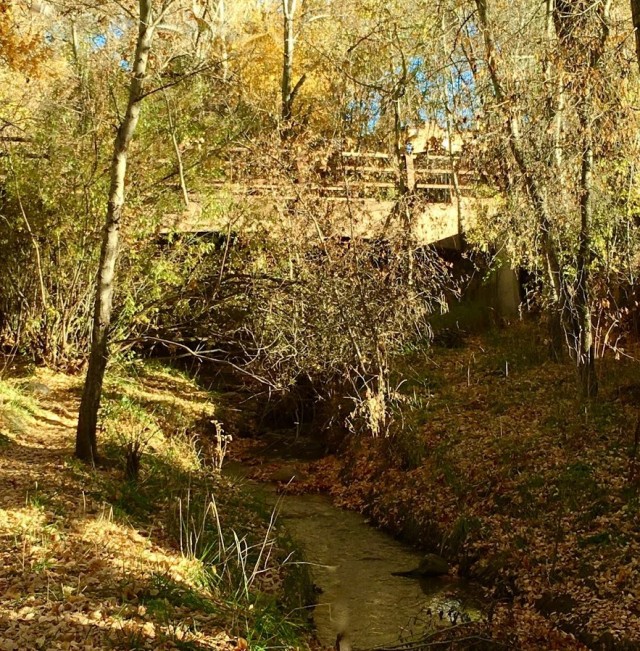 Under the bridge on Canyon Road, where the 2 muscians lived in 1995

The Economos Art Gallery on Canyon Road.  What’s so special about the gallery?  I don’t know because with a hundred art galleries up and down the road all in the space of a mile I stopped noticing.  But I had to notice James Economos.  James has run his gallery for fifty years.  There he sat behind his desk today, as always.

But he’s gone blind over the years.  That macular thing.  He’s blind and still opening and running his gallery.  How does he do that?  With great intellect, humor, honesty, personality and more.  If you want to buy something in his gallery then you are literally going to have to work to help him sell it to you.

What an uncommon drop dead pleasure to walk in off the street and encounter such an admirable and impressive human being.  I stayed an hour.  I’m going back tomorrow because he runs the place seven days a week.

Go to Santa Fe.  It will reawaken you to life and really living it if nothing more.

Here’s Jim with his warming smile.  He’ll see right through you like he did me. 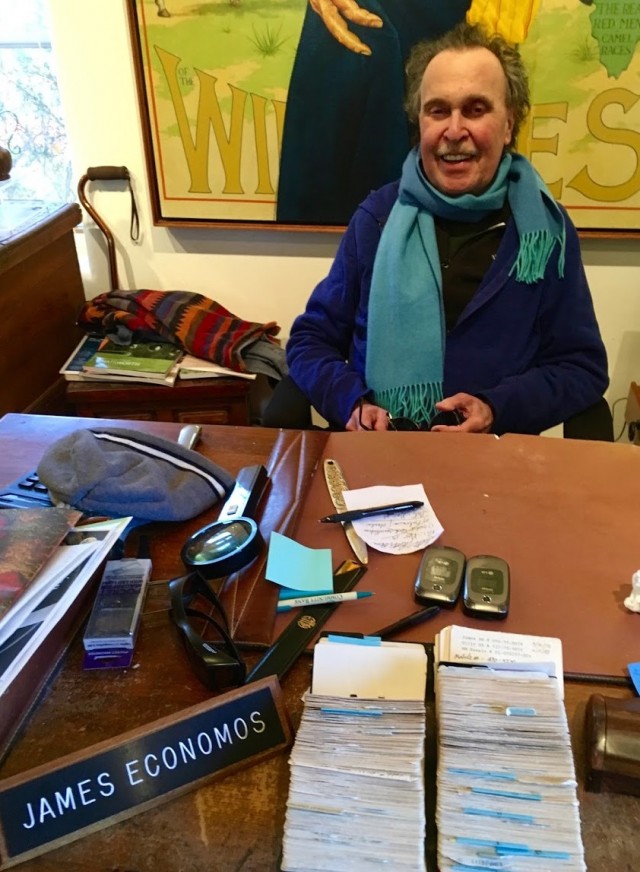 Dining at night is a bitch unless you are one of those people who plan well in advance. I guess that lets me out. Santa Fe’s most excellent restaurants, one and all, book up for Saturday nights. El Farol is one of those places right next to the really really top flight, Geronimo, which I can’t say is really top flight because I’ve never gotten in! Laura at El Farol next door took pity and said I could come at five, which is pretty damned early to eat dinner. I showed up at four because I had nowhere else to go. I was burned out going from gallery to gallery. Nobody waited on me for an hour and then this guy named Mark Rodriguez Salazar found me in the corner.

He was not just any waiter but a former sous chef up from Albuquerque. The El Farol has chefs that have been there 18 years so they made Mark a waiter. He’s working his way up. Might take ten or twenty years but Mark is patient. Talk about a dinner though. I had invited some powerful friends. Mark ordered for everyone and then started this dinner I’ll remember for life. One course after another. Each item was presented like I was the president being served from the White House kitchen. Each item was perfect. My friends were blown away. Main course was tenderloin on a bed of green chile mashed potatoes with a crown of red chili hominy grits preceded by so many French cheeses…but I run on…. 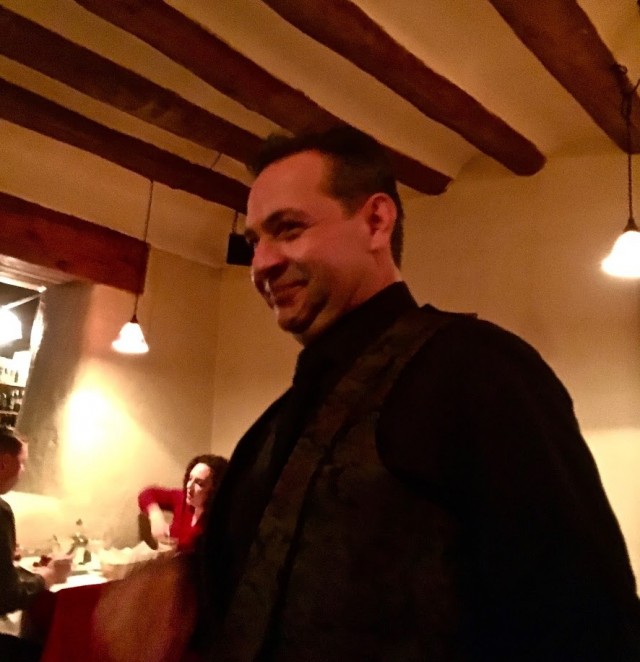