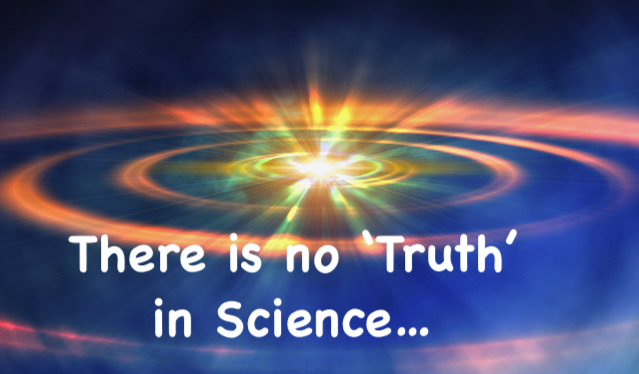 If history and science have taught us anything, it is that passion and desire are not the same as truth. E.O Wilson

There is no 'Truth' in Science.

There is only a repeat performance of experiences and experiments to confirm that things tested give every appearance over time of rendering the same result as the initial tests or experiments. Quantum theory, followed by the application of quantum mechanics, has allowed us, those of us who study and choose to believe, that scientific results are subject to vagaries of change and chaos seemingly unestablished by any stable force in an ever-changing and only vaguely understandable physical universe.

But, the verification process, religiously applied, allows humanity to advance into an uncertain future grounded with the background and experience of those humans who have come before...and taken the trouble and (many times pain) to gift usable knowledge to future generations that might not know, or understand, or have been able to try it.

There is no 'truth' in the human social order either. Everything in every human speck of rationality and motivation, is genetically hard-wired to curry favor, to help those humans known closely, to invest in family members...unerringly, constantly and without any reservation, except in denying that that is the basal motivation factor in almost all human endeavor. The 'numbers' most everyone sees on television or in the mass media, to 'prove' the facts presented, are almost always wrong. They are deliberately wrong to favor one side, one family, one group, or even one individual. Those numbers can be bank balances, interest rates, political results, polls, and even numbers of measurement.

As an example, I had the plot of land I live on surveyed.

My neighbors (3 of them) observed this and then called for surveys of their own property adjoining mine. We got together after the surveys were complete. In order to prevent war and disaster with my neighbors, I agreed that my plot of land was actually much smaller than my survey would have seemed to indicate. I moved the stakes to an agreed point on each side to everyone's satisfaction. Real-life.

Oh, by the way, in the social science of sociology there came a theory that explained all this and how it came to be, back in the seventies and eighties. That theory was called sociobiology, and the monumental and stunning conclusions with respect to it were deemed likely to affect each and every sub-discipline of social science. It did not. Instead, sociology was pulled down, out and apart, and then stomped to death... it is genius-level creator marginalized and sent to some environmentally safe pasture.

Quietly, because of what E.O. Wilson studied and wrote about, the very heart of sociology was removed and it was sent to the same pasture Wilson has been consigned to.