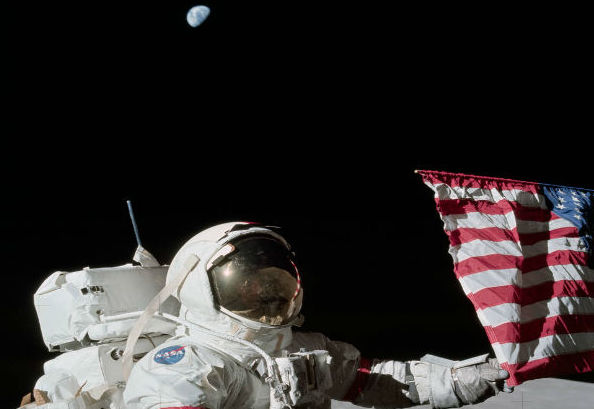 When Eugene Cernan took his last step, the last step of any man to walk on the moon, it was a step backward. Neither he, nor any of those adventurers would ever have considered that we, as a nation and a species would step back from a forthcoming age of great blossoming success that the conquest of the moon was the cutting edge of. And here we are today, delivering frozen foods up and down to a space station that is basically made of advanced Legos. A moon that just sits there. Mars. Beyond. Nothing.

If current leadership, and that leadership that has been in control ever since Eugene Cernan, has its way then space will truly be the final frontier and it will not be explored or enjoyed by mankind. Yet we continue to pay the Russian Bear over $70,000,000 to ferry our Astronauts to the ISS (International Space Station)

We, once again, took a great stunning fall down through our own selfish belly button. And almost the entire dumbed-down lead-drinking anti-science population has no clue.