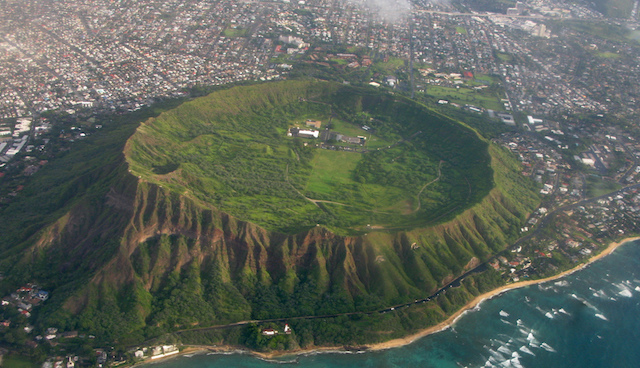 The July of 1962, on Oahu, was oppressive in more ways than I, and my friends atop Diamond Head, could count. The Sundays came and went, Sunday being the only day of the week that our parents would let us run off and climb the crater wall above Fort Ruger that swelled out on the ocean side to become the tip of Diamond Head.

Fort Ruger was an Air Force base created along the back edge of the crater during WWII in order to serve as the base of island surveillance operations in case the Japanese tried to invade. By the sixties the base was barely functional at doing anything, other than having a great officer’s club, a small PX and allowing families of any military service to live in its old housing. The inside of Diamond Head volcanic crater was loaded with top secret communications equipment, but nobody seemed to care if kids scaled the crater walls and cavorted atop the sharp edges that rose up all around it’s circumference. At the very tip of the crater, on the topmost portion, a pill box was located, built during the war but abandoned soon after. The flat concrete surface of its roof served as the base of operations for myself, Alan Haita and Jimmy Dorrenbacher. Alan’s dad was Air Force, Jimmy’s Army and my dad was in the Coast Guard. 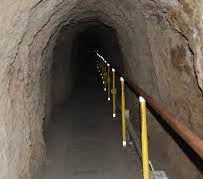 The three of us had thrown in our allowance one month for a battery powered portable radio so we could listen to a special classical music station that broadcast on Sunday mornings. Every Sunday we climbed, teetered along the crater-top edge and formed together to listen to the music, while surveying Waikiki, Honolulu and the entire surrounding area. We lived in misery. Real life was happening on the mainland. The only good news was about how the new budding University of Hawaii had failed in its attempt to be accredited by whatever authority did those things. We were all juniors in high school and all were going on to college. The good news was that we were all going to be able to go away to the mainland to attend school the following year, and get off the boring rock of an island, where local kids were acceptably local and Caucasian kids were Haole outsiders. We were Haole outsiders. The views we witnessed every weekend were one’s of awe and adventure but certainly not one’s of beauty. Beauty to us could only be found back on the mainland where the fun of life was going on every day without us.

Diamond Head crater was the single most attractive feature of our lives. Very few people, and no other kids we knew of, had any idea that the ocean-facing part of the crater was hollowed out and filled with passages and rooms all locked and supposedly sealed off with giant old-fashioned padlocks attached to big iron rings. From the inside of our pillbox atop the peak a spiral staircase plummeted down for five stories. We knew there had to be a way in somewhere near the bottom, off one of the spider leg passages, that would allow us to access the peak without climbing out and along the top edge of the crater walls. We went through the musty old tunnels, using cheap “D” cell flashlights purchased from the local market. The key passages, or so we surmised, were secured with newer locks made of metal too hard for your cheap hacksaw to cut through. We labored away through out last year on the island but never found the magical opening to the outside world.
My father would go out to sea for three or four months at a time aboard the USCG Kukui, a Coast Guard buoy tender that also was used for other missions, as we came to discover on the night of July 8th, 1962.

I sat on top of the flat pillbox roof with my friends Alan and Jimmy. We’d told our mothers that we were involved in a round robin of summer tennis championships at the  community center. None of our parents had any idea about the fact that there were no tennis championships. We all played tennis there however, using military equipment because we had no money. 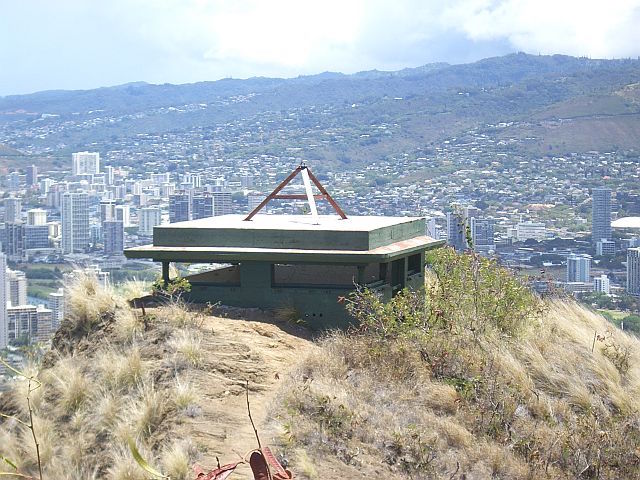 My dad had been drinking one night two weeks before he headed out to sea from the Sand Island base where the Kukui tied up. The three of us watched his ship 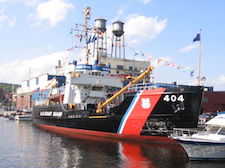 sail from the dock on the previous Sunday with the single side of a broken off set of Bushnell binoculars. There was almost nothing we could not see from our high vantage point above the entire expanse of one side of the island. My dad, in a drunken state, related secret information to the family that night that only I believed. Dad never talked about his life aboard ship so I was entranced when he starting talking about what he was going to be doing. The military was going to explode the largest atom bomb they’d ever made high above the earth at exactly eleven p.m. on the night of July 8th. It would be nine a.m. on Johnston Atoll the next day, where the test was to take place. Dad’s ship was to set twenty miles off the island loaded with scientists and other important observers. Dad said that the test would be so big that it would be easily visible from Oahu if one looked in the right direction. The rest of my family, my brother, sister and Mom didn’t pay attention, but I did. I would only find out much later that dad had revealed extremely sensitive top secret information in telling us.

My friends and I spent hours at the local library checking maps to get the right direction down, which proved to be fortunate. From the top of Diamond Head, Johnston Atoll was eight hundred and fifty miles straight out from the beach below.

The thought of getting to see even the slightest effects of a nuclear or atomic blast drove the three of us to take great precautions in telling no one. We ‘borrowed’ tennis rackets and balls from the center in order to provide better cover when we returned home. They were stashed at the back bottom of the crater wall where we could pick them up on the way back. We took extra batteries, purloined from out homes, in order to have enough light to climb down from the risky crater edges in the dark. All of us had spent some years in local elementary schools performing duck and cover drills under out desks once a week. A war was coming, or so our military families all predicted, with either the Soviets or in Southeast Asia. John Glenn had flown around the planet only months before. Nuclear bombs, space and rockets were the future. Our future.

We counted down on top of the pill box, our secretly made after dinner snacks of peanut butter and jelly sandwiches, layered with Butterfinger bars carefully cut thin, all consumed. We counted down by the minutes, pacing back and forth across the fifteen-foot square of concrete. When it came down to seconds we all sat in silence our arms wrapped around our knees, staring out. Only Alan moved, constantly checking the passing time turning his flashlight on and off to see the lone wristwatch among us until we got down to thirty seconds. Then we all counted backwards together using the word Mississippi between each number. We got to zero. Nothing. Many long seconds went by. Much later I’d discover that it was only nine. 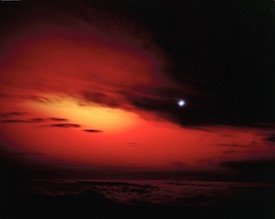 Then everything changed. The entire sky lit up, but not with white regular light. It was red. We could see everything, the sea, the clouds and the whole city, all brightly lit in red. Then it went dark for maybe two seconds. Then it lit up again in yellow. That very slow blinking of many different color lights went on for what seemed like a long time. Finally, it was dark again. Before we could get our breath back to comment Jimmy pointed at the horizon. A small white ball could be seen right where Johnston Atoll was supposed to be, so far away. The flare of light grew from golf ball size to that of an orange and finally to a basketball. It was bright as day everywhere. The effect stayed for almost a full minute before slowly beginning to fade until all was as before. It was like nothing had happened, although three teenagers were changed for life.

We climbed down silently, expending all of our mental and physical energy on simply getting down without injury. Only after collecting our tennis junk did we talk.

“I didn’t really believe it before,” Alan said, as we walked from one street light glow to another.

“No, we believed you,” Jimmy said. “I think he meant about what we saw. It was so powerful. It was truly unbelievable.”

“I forgot to look through the binocular,” Alan confessed, ruefully.

“And I forgot to take a picture,” I replied, mom’s unused Argus, loaded with expensive Kodak film, still shoved deep into my right front pocket.

Many years later I would discover that the test was called Starfish Prime and that it had been a one-point-five megaton explosion set four hundred miles above the atmosphere. It produced such an intense magnetic pulse that the street lights in all of Honolulu had gone out. The government would never attempt such a high-powered air burst again.

Jimmy stayed on Oahu, getting ready to attend Duke University on the Mainland. Alan and I went off to our respective colleges in August. Jimmy never made it, dying in an unexplained and un-investigated fall from one of the edges of Diamond Head after we were gone. Alan and I never talked about it or anything else. He died of cancer in California many years later. I talked to my dad, before he died, about the test, but he said he’d never been involved in anything nuclear and if he had been he’d never tell me.

Today, the old pillbox is still up there on top of Diamond Head, but the passages are filled in with sand and concrete, blocking any evidence of their existence. The pillbox top is part of a public view destination with stairs and railings built all the way up along the inside of the crater wall. Fort Ruger is gone, turned into a college campus and the the interior of the crater is now home to the tsunami warning center for the Pacific. There are no more nuclear tests and, quite possibly, there aren’t enough people around who’ve seen the real power of nuclear weaponry displayed in such a graphic way, to care.

Have some time?
Watch this de-classified Video focused on Starfish Prime