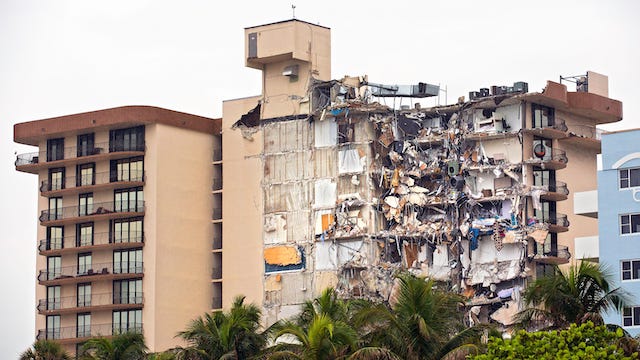 Where is the logic and why is the might, the huge and world-shaking might, of the United States of America so fractured and rendered powerless and little more than useless in emergency situations? Where was the body of investigative forces that should have gone immediately to work to find out about the Kennedy assassinations, the Twin Towers disaster, the 6th of January insurrection, and now the Florida apartment building collapse?

Instead, each situation of such huge magnitude is swirled into a charnel house of political factions, competing and disagreeing civil and governmental forces, and even uncooperative police and fire department organizations. Why has nobody first stated the obvious, as in this case, and then gone to work to do something about it? What’s the obvious? That apartment complex still has parts of it standing. The whole site should be surrounded by a perimeter and then everything inside that perimeter taken apart and down by huge construction cranes and other heavy equipment. Every last brick, facade, shingle, I-beam, and more. And it should be done in a matter of hours or a few days.

Instead of that, we have the usual; a bunch of sputtering forces doing a bit of this and that, while the supposed leaders there go on television every day to say that they are doing everything possible, while they mostly do nothing. Like we don’t have the people, the assets, the equipment, and the ability to really go at that mess?

Oh please! Shaven lemurs, come down from the trees, to pull fruit from the tops of the trees, and then race to the ground and fight over the results…while lying about what is really happening. That’s what we are and what we really do.

We live in a country of brilliant success, dominated by studied, stilted, selfish, and grasping members of a ‘lemur’ leadership. It’s bizarre and almost impossible to understand. The hateful anthropoid apes in Congress now provide the broken, busted, and awfully evil ‘news’ that the former fat fart of a leader used to provide on a daily basis. Such expression of stupidity and selfishness sells…and that’s just a fact.

If you don’t believe that then know that Dog the Bounty Hunter has a new series about to air…and American’s will flock to the show, while the very few survivors who might be under that rubble in Florida slowly expire. Do not ever, if you can possibly help it, get caught in the American cultural foundations of the musical chairs game of life here. Make sure you have a chair because when the music stops nobody’s going to give you one. And stay the hell out of, or get the hell out of, every high-rise apartment or condo you might be occupying in Florida.