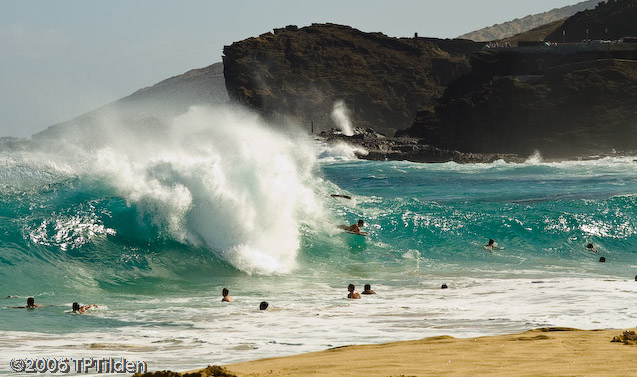 Sandy Beach was called Sandy, but only by Haoles and tourists.  It was Sandies Beach to the locals, just like the wonderful Bellows Beach further around the shore, just beyond Waimanalo, was called Sherwood Forest to them.  The tourists who visited that beach always remarked about the wonder of the densely beautiful pine forest spread back and forth and up and down it only a hundred yards or less across the pure white sand to the beating surf of the ocean.  Sherwood Forest’s real meaning to the locals had little to do with the forest, however, and everything to do with the fact that any tourists leaving valuables inside their cars when they parked them just beyond the forest would return from an idyllic beach stay to find everything they had gone.  The cars left there, easily identifiable as tourist conveyances because they were obvious new rentals with rental stickers on the windshields and bumpers, were not only burglarized but their locks punched out or convertible tops slashed open.  Although Oahu had one-hundredth of New York City’s population, it continually outranked it in car break-ins by over fifty percent per year, many of those along the two-mile stretch of Bellows Beach.

Sandy was ‘ripping’ when Jimmy pulled the Corvair off the highway and nosed it into the small parking lot near the beach’s Makapuu end.  Darren looked at the monster waves rolling in.  They moved slowly through the deadly blue deep water, coming up out of the Molokai Trench, cold and seemingly slow.  They ran directly in toward the steeply inclined sand and broke right upon its wet surface.  “Uncommon ocean break,” was what one of Darren’s father’s friends had said upon staring out at the waves before walking right into them and being stripped of his swimsuit and sent to Tripler Hospital after trying to dive under one of the fifteen foot monsters that possessed no ‘under’ at all.  Darren didn’t like Sandy, except to sit on the sand and watch for tourist women in two-piece bikinis to try to somehow get through the pounding waves.  So many lost their suits that it became hypnotic for young men to visit the beach and do exactly what Darren liked to do.

Jimmy unaccountably sat down on the sand, just short of where the giant surf crashed and rolled up the sand to then attempt to reach up and get the boy, but never quite made it far enough before being sucked back down the incline to become the next wave.

“I thought we were going in,” Darren said, sitting down to gaze out upon the wonderfully wild and passionate scene.

“You know I can’t go in,” Jimmy replied, his voice depressed, his chin resting on his pulled-up knees.

“You want to go down to Queens and confront those guys again, too,” Darren observed.  “What gives?  And you didn’t turn on the radio or anything on the way here.”

“I can’t take the high sound of the music,” Jimmy said, surprising Darren.  “The sound of the waves breaking is okay, even though its louder.  I wanted to make sure I was okay, and I think I am, but also don’t want to be weak.”

Darren didn’t know what to reply.  He knew nothing about the physics or medicine of hearing, and he couldn’t figure out what Jimmy meant by being weak.  Getting hit in the head by a guy, out of nowhere, who weighs a good hundred and some pounds more than you didn’t seem to mean that the guy who got hit was weak, at least to Darren.

“In a couple of days, you’ll be all healed up, and then we’ll go down there and kick his ass,” he finally said, after a few minutes of surf-interrupted silence.

“My father won’t understand,” Jimmy said, after a few moments, his face already beginning to redden in the direct rays of the unprotected sun, plus the billions of reflections up and back from the rough semi-pocketed sand. “I can’t wait too long.”

Darren was mystified. What wouldn’t Jimmy’s father understand and what might he be waiting for that could take too long? The moments passed, but Darren refused to ask any more questions. Instead, he watched the monster waves slowly parade in, rear up mightily and then expend all of their energy by crashing directly down onto the sand. He looked out over the tops of the cresting giants and watched the few locals who waited for some really huge monster to body surf for a few seconds before being crushed and possibly broken upon being jammed down onto the flat surface of the waiting wet sand.

The locals are what is was, it finally came to Darren. He looked sideways at the profile of his friend. It was an about-face. It was about macho. The islanders were all about both of those things, which had little or nothing to do with real performance. Threaten, act tough, but do nothing if it can be helped. The strike against Jimmy’s head had been an accident. The big native had somehow lost his normal reticent acumen and lashed out. Now Jimmy had to prove that he was courageous and tough. He didn’t have to prove that to the locals at Queens Beach, because the Duke had already taken care of that. He had to prove it to his father.

Darren reflected on the difference between the boys’ fathers. His own father was abusive, verbally and physically, but only to children and women. He was as threatening and macho as any military man could be, but he was never confrontational with them, had never gone into combat, or even had a fistfight in Darren’s memory. Darren had always thought that he had a pretty lousy dad. But Jimmy’s father was another creature entirely. He was the ‘real deal’ kind of man, who’d fought in the war, and then the next war and then become some kind of war hero to join other ‘special’ men training to do even more combative things. He was a man of action, no comment or threat, like the West Pointer Darren had encountered at the beach and then at his own home. Which father was worse to be the son of?

Jimmy got up suddenly.

“You’re right, tomorrow’s another day,” he said, dusting the thick clean but very hot sand from his legs and swimming shorts. “I’ve got to get you to home to change, and then to work. We’ve got the whole Elvis thing to think about and also tomorrow. I can’t go against those guys yet. I know it’s too soon, but you can for me, and my dad won’t even know.”

A sudden deep pang struck Darren right in the center of his belly. “You can?” he whispered to himself, getting up to follow his friend, now loping toward the convertible.

The ride was exhilarating but not nearly as much fun, as Darren considered the depth of meaning and the distinct possibility of violence being performed on his body the next day at Queens Beach. The car rocketed up through the switchbacks atop the gorgeous cliffs, with the Molokai Trench swells shattering against their vertical faces, throwing spume and spray high into the brilliantly lit afternoon atmosphere. They passed the archery range, and then the police firing range, nestled down into a crook just off-road before they came to the top and barreled past Hanauma Bay’s entrance.   From there it was only a very few minutes down Koko Head’s flank and into the small village of Hawaii Kai.

“Shave ice?” Jimmy yelled but didn’t wait for Darren to answer as he made the turn into the small shopping area that was at Hawaii Kai’s only intersection. There was a small Chinese store near the end of the strip mall that sold shave ice but only in three flavors. Neither boy cared since true aficionados of shave ice only ever ate the block shaved stuff when it was flavored with strawberry syrup.