THE ELECTION and the Cubs 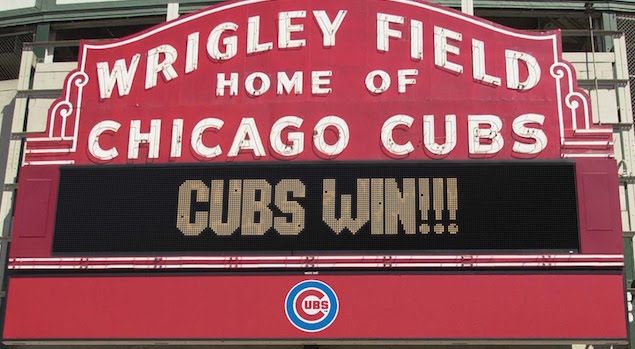 Election and the Chicago Cubs

It is Sunday night, which means that we only have a week and a day of this election cycle to go. Can we hack it? What will be the next scandal or investigation, tape or audio recording? Whom will come forth to be famous or to be the instrument of one side or the other? Everyone would love not to care but have been forced to care by the media. There’s no place else to go.

Football. Hohum. The World Series. Yes!  But then, there’s the Cubs.

I remember being the coach for a little league team so long ago. The champs came to town to play our little back country team. We were damned good. Until they got off their big silver and blue bus. Until they showed up in wonderful silver and blue uniforms with real cleats, instead of the “T” shirts, jeans and tennis shoes we had. I looked over at their dug out and then at ours and my kids faces. I knew we had lost before the game started because my kids were merely waiting to get the other kids autographs. My batters would not even swing. They said the pitcher on the other team was too good to hit. And there you have it.

The Cubs. Take a look at their faces when you watch the next game, probably the last game. And then they can go back to being the Cubs. The only losers in America that America loves and approves of being losers. At least watching them is better than listening to one more word of this awful acrid and stench-ridden election presentation.