THE FIRST DAY, 30 Days Has September 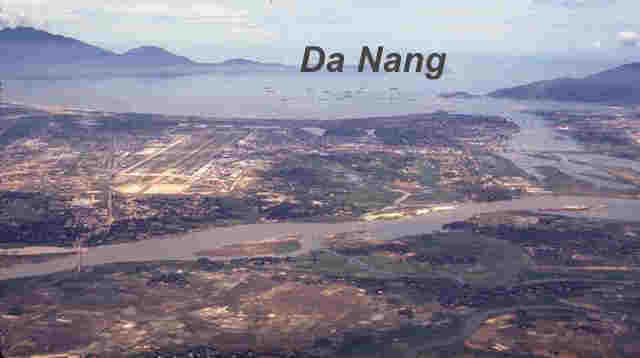 The door opened. It was a steel door about six inches thick, or so it seemed.  It hit with a jarring thud when its heavy flat surface pivoted down and smacked upon the mud. Sunlight shot in like a wave of heat, followed by a wave of real heat, the air-conditioned inside of the armored personnel carrier likely to be my last until my tour was over. I had no weapon, no pack or jungle boots. I was new.

The civilian airliner had landed at Da Nang, offloaded a hundred uniformed men like me and then left without the crew ever getting off. No passengers had been waiting to  come aboard.  An F-4 Phantom fighter lay burning at the end of the runway. We’d all seen it before we touched down.  The flight attendants said it was probably an old plane used to train fire fighting teams.

I hunched over, moving toward the torrid heat and light streaming in through the hole made by the back of the armored personnel carrier falling into the mud. We’d ridden maybe five minutes from the airport. Nobody told us where we were going or what we were doing, so I simply followed the silent procession of men out into the mud, dragging my government flight bag at my side. I was an officer but I’d taken the single gold bars from my utility jacket after being told by the plane crew that the shiny bars weren’t worn in combat areas.

Six of us had climbed into the waiting carrier. There had been other carriers but I had no idea where they’d gone because when I stepped outside, only one remained. A tall Marine staff sergeant stood facing the rear of the vehicle about fifteen feet away, on more solid ground. His boots gleamed in the sun, his spit shine on each, perfect. The pleats on his uniform, a short sleeve Class A in khaki, were ironed so starchy sharp they looked dangerous. Unaccountably, he wore a D.I. instructor’s flat brimmed hat with a small black leather tassel dangling from its stiff edge. His hands were on his hips, his elbows sticking out looking as sharp as the pleats running up and down the front of his shirt.

“Gentlemen, welcome to the Nam,” was all he said, waiting a few seconds for his words to sink in before turning and heading off on a path through the thick undergrowth.

It was the first day of my time in Vietnam. I was unafraid, my emotions blocked by wonder. The light, the heat, the thick cloying mud with a burning Phantom sending up tendrils of black smoke snaking across the sky, masked everything else I might be feeling. The plane I’d arrived on was from America and it was gone, America gone with it. I moved along the rough hewn path, my flight bag knocking into the ends of every hacked off branch. I was nobody. I didn’t feel like a Marine officer or even much of a citizen, and I sure wasn’t in California anymore. I was a slug moving through a forest that looked like something out of a bad horror film, following an enlisted man I was supposed to out rank but who apparently didn’t think so, toward a destination nobody had told me about. I was not disconcerted.  It went deeper than that.  In only moments, with no warning, I’d become lost in another world that defied the darkest imagination. We came out of the bush to see a wooden structure in the distance.

“Gentlemen, the Da Nang Hilton,” the staff sergeant announced, continuing to lead us without pausing or turning.

Just before we came up to the building, he stopped. We stopped behind him in a row, as if we were in a squad he commanded.

“It’s got a moat,” one of the other men said, pointing at the five-foot-wide stretch of water dug between us and the building. A thick plank extended out over the water to allow access to a ratty five story wooden structure beyond it.

“That’s a benjo ditch, not a moat,” the staff sergeant indicated. “No bathrooms here, except for the ditch.” He stopped and ushered us up, one by one, onto the plank. “They’ll come for you when they come for you,” he said to our backs, walking away after the last of us crossed.

There was nothing ‘Marine Corps’ about the shanty of an open barracks . No  windows or even walls. Wooden pillars held the wooden floors up with a big tin roof covering the whole affair. I saw so many bunks it was impossible to count them from the outside. A corporal sat at an old metal and rubber desk taken from some earlier war supply house. I watched him deal with the officer in front of me, making no attempt to hide his boredom.  “File,” the corporal said when he finished, holding out his hand toward me. “That’s your bunk. Break the rack down and make it with clean stuff in the cabinet down at the end. No lockers. Keep your own stuff close.”

There had been no “sir” in any of his delivery to the guy in front of me. There was none to me either.

“Tag,” he continued, handing me a metal edged paper tag with the number 26 written on it’s white surface. First floor. Officer country. You heard the rest.”

I wondered why officers were quartered on the first floor. I presumed, as I made my way to rack number 26, that it was because the benjo ditch aroma would be more available. The rack was filthy when I found it. The place was nearly full with men recently returned from combat patrols or whatever, I presumed. Most were covered with mud. None looked like they’d showered or washed in days or maybe even weeks. I hauled the old sheets to a bin near the end of the narrow row that led to my bunk. I tried to talk to a few of the other officers who lay without sleeping atop their muddy beds. They would only look back at me like I was some specimen on display at a zoo. They would not answer. Not one of them. I finished making my bed, deposited my flight bag under my cot and then huddled with my back against a corner support. The bunks were four high with a slatted ladder going up on one end. The three bunks higher up my tier all sagged with the weight of other officers in them. Their packs simply lay all over in the aisles with junk loosely attached to them. Junk like muddy guns and grenades.

It started to rain. Like the day was not proving bad enough with the smell, the mud, the zombie company and a miserable cot without a mattress as my supposed resting place. There was no pillow either, but there were mosquitoes. Perfect. It was at that moment that I became afraid. I’d never been afraid of anything in Marine training, other than the very likely fact that I might not get through to become a Marine Officer. That I was second in my OCS platoon, and then won The Basic School Military Skills award, only reinforced the fact that I’d found my calling. And here I was, in absolute squalor, trapped in misery with a bunch of other men who’d preceded me and who now appeared all mentally ill. What had happened and where was I really? I’d seen all the war movies through the years and I’d never seen anything like where I was. Nothing close. Those wars and those characters had meaning, relationships, communication and decent clothing. I had shit. Quite literally.

I tried to lay down but could only cower and slap at the mosquitoes. From a bunk above, someone tossed a small clear plastic bottle. It landed on the wooden floor with a small thunk.

“Repellent. Use it and then shut the fuck up,” a voice said from above. I leaned over and picked up the container, the voice presumably registering a complaint about my slapping of insects. I rubbed the foul but strangely attractive oil onto all the exposed surfaces of my body and returned to my previous position.

I passed the time, as the sun set out in the rain, watching mosquitoes land but not bite me, as if they sensed a tender morsel nearby but couldn’t access it. The repellent didn’t repel them at all. It simply made me less edible, which was fine by me. Only a few of the other men had flashlights or bothered to turn them on. I had nothing in my bag except some extra socks, underwear and a useless change of street clothing. And my hard fought proudly worn gold bars.

I waited. Even though it was still early, I knew there would be no sleep. I recorded each passing moment by reading the luminous dial on my special combat officer’s watch I’d bought at the PX stateside for fifteen bucks. At eight o’clock a face appeared before me — a man holding a flashlight so I could see his features.

“Welcome to Vietnam,” the face said, its eyes not looking at me. “Chief of Staff will see you now.”

Another zombie, I concluded, already getting tired of hearing the welcome phrase.

‘Then call me sir,” I replied, getting out of the bunk to follow the him.

“If you like,” the sergeant said, not saying another word — certainly not sir.

My first day in the welcoming Nam was over, and my first night about to begin.