The Gas, Oil and Coal War – From The Wilderness 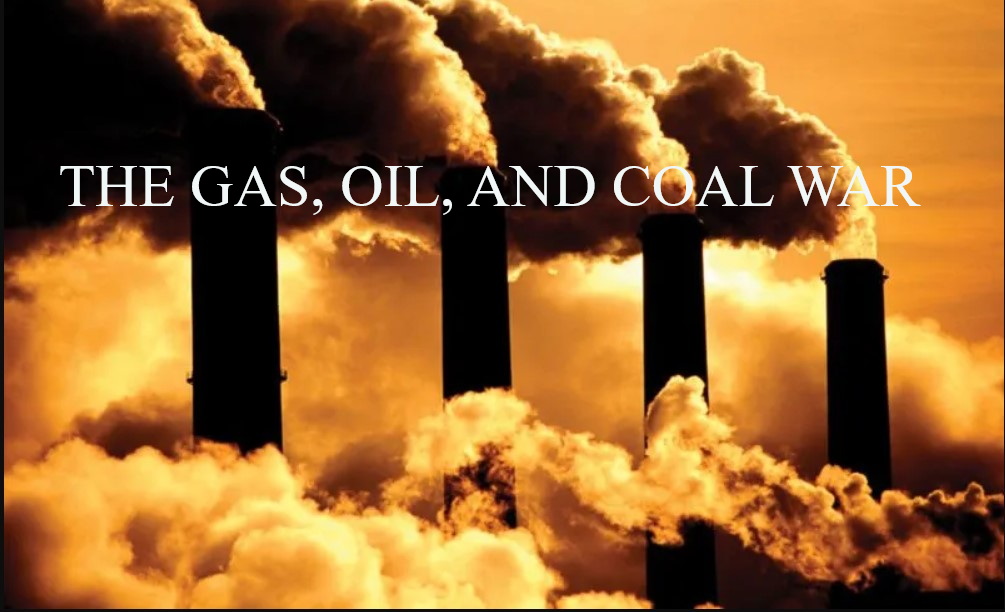 THE GAS, OIL, AND COAL WAR

They are lying, all of them.  Natural gas cost one-sixth the price to burn by home and business owners across the land in stoves, heaters or any other way.  That cost amount is not hard to figure out.  Just convert the therms used to measure gas production and the kilowatt hours used by electric companies.  You convert to BTUs (British Thermal Units) and then do the simple math from bills sent out by both operations, gas and electric.  What’s going on that is causing this attack by electrical producing operations upon gas producing operations?  It all goes way back to twenty years ago, when a young man who owned a battery company was asked a question.  He turned to the television cameras and told the truth.  A shocking truth that was neither made much of nor believed.

He’d been asked at what point (prior to the rise of Tesla and the others) when he felt electric car production would take off to equal or surpass that of gas-powered vehicles.  He answered: “when they can get the price of electricity up to being equivalent with what gasoline is today.”  That truth he spoke has been in the making ever since.  Think about all the electrical power plants using natural gas to power their huge generators.  Thirty-Four percent of all electric plants in the US are powered by natural gas.  What is the result of this?  Environmentally more agreeable power is the almost universally agreed upon reason that natural gas is being used to power so many electrical plants.  But that’s a lie.  Oh, natural gas is much better for the environment than burning coal, but certainly not as good as the direct electrical power generated to deliver to customers from windmills.  Even that power is thrown into the lying arguments about how bad natural gas is, however.  The question avoided in discussing natural gas being used to power so many electric plants is why is the conversion from burning natural gas at the electric plant so expensive compared to pumping the gas directly to customers and having them convert the gas to provide heat and other energy-driven machinery?  And therein lies the foundation of the lying.  It should cost less to produce that energy from the specialized and centrally located electric plant. Why doesn’t it?  Because the electric operations can charge what they can get away with charging, particularly when the lies are believed.

Go back twenty years to the battery guy’s answer.  How much is natural gas power, in cash, comparted to electricity?  Gas is one sixth in price if delivered directly in the form of the naked gas itself.  How much is natural gas, if compared to the energy output of gasoline, as burned in most vehicles today?  It’s about one sixth the cost.  Are you starting to get it?  The regular cost of electricity has already been increased to the point where it’s just about equivalent to that of gasoline.  The only thing holding the cost of operating an electric vehicle today, over that of gasoline powered vehicles is the inherent efficiency of electricity to be converted at the motor-output source in electric vehicles.  If natural gas becomes limited to being used only by electric companies, then that inherent efficiency will be quickly overcome, and the battery guy’s answer and prediction will have come full circle and held to be absolutely true.  There is almost no way that the billionaires who’ve come to own all the oil in the earth, over the true ownership rights of all humans on the planet, will allow themselves to be reduced from the billionaires they’ve become back down to only millionaires.

We can all expect natural gas, delivered to homes and businesses across the land, to be eliminated in the years ahead.  All vehicles will eventually be driven by electric power their sources of energy will be just as, or more expensive, than what they are experiencing today.  The ostensible reason will be environmental.  The real reason will be nothing more or less than legal, allowed and even endorsed greed, founded upon a huge mass media advertising series of programs made up of well-shaped and much practiced lies.