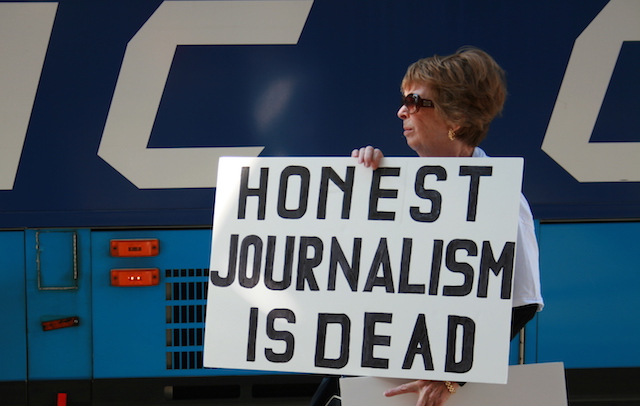 How they handle the news. Being in the newspaper business at The Geneva Shore Report I am now much more aware of the ‘slant’ that mass media takes and how it seems to take it all together although, for the most part, I cannot see linkage demanding that.

Yesterday Donald Trump doubled down on his comments about Obama and Hillary being the founders of ISIS. That was following his monumental gaff he made in sending the gun nuts after Hillary and right after he did the ridiculous Khan pillaring. One, two and three and you’d think he would be out as a candidate.

But what happened in the news this morning? All three of my daily papers were in the driveway. I got coffee, reviewed yesterday’s Olympics on T.V. (I absolutely love the Olympics taking over so much of the news) and then read about Hillary. You see, the slant the papers took was not about Trump or his awful comments. It was about how Hillary is just as bad, how Hillary is not be trusted because of her emails and about how difficult it is for her to be liked, with a sidebar about how she won’t release her medical records. The only think I can think of, since all three of those papers are independent of one another, is that they are trying to make the presidential ‘race’ more of a race instead of the slam dunk it is headed for. In fact, it has to be. Trump has the KKK, the Aryan Brotherhood, the NRA, the Neo Nazi group and white pickup truck drivers getting their trucks repossessed. That’s it. Even rich people are dumping him (because if he pushes the button imagine how much they lose!). Yet, here we are with these three deep and cutting slants that are anti-Hillary.

I think it’s because she’s so far ahead. Is there any wonder why the public hates the media so quietly but so much?