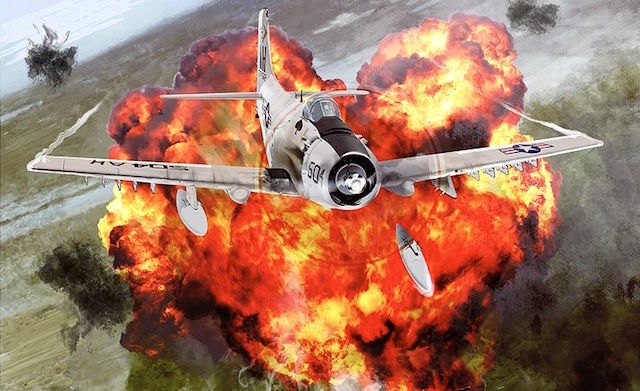 Puff came in for the third time, orbiting Hill 975 and pouring what seemed to look like liquid fire into the mountain, while it sounded for all the world like the place was being chewed up with a giant out of control chainsaw. The way the big cargo plane tilted and then orbited was eerie to watch as if the low-flying airplane was being restrained by some invisible guiding string hanging down from high up in the heavens. The sun peeking out of the clouds, as mid-day came and went, added another strange element to the scene, and the Skyraiders, lurking around and around as if waiting for their chance to strike at anything that moved below added an additional odd element of impending doom for anyone under them.

Once Puff was done the Skyraiders took over the attack, slowly flying up and down the valley as if waiting for any surviving prey to show its head. The day wore on without any further fire until mid-afternoon, when Cowboy decided the time was right all on his own without any communication with me. I’d been in communication with him and let him know that we would be out on the exposed flat after dark to recover one of our own. Even the suppression of fire the mighty thundering Skyraiders might supply would not allow us to make the retrieval of McInerney’s body without likely and significant losses of our living Marines. The resupply was also being planned and scheduled for early evening so the greater the damage to the fortified and tunnel-riven mountain during the daylight hours the better.

The Skyraiders passed once more down the valley, and then everything changed when Cowboy’s lead plane plunged low, dived in toward the middle of Hill 975 and dropped two of the huge canisters of napalm from under each wing. The tanks hit the mountain. The jellied gasoline the tanks contained lit and rolled down the mountainside, spilling out and burning at a rate that caused the heat to be felt all the way behind our lines and beyond. The other two Skyraiders dropped their tanks, each one selecting a different part of the mountain to burn. Once more they circled, and then came in again, except this time higher. All three planes dropped their remaining napalm supplies on the very top of the mountain, causing the torrid liquid to ignite and flow down the sides of the mountain to overlap the areas that had been hit and burned in their earlier runs.

The Wright radial engines quieted, as the planes headed back to base. Through the afternoon they returned three more times to repeat what they had done earlier. Whether the fire on the outside of the mountain, some of which had to reach into the tunnel complex that riddled the mountain, caused a lot of destruction nobody could know, but the mountain that was once green with lush jungle ferns and other growth, was a smoking black cone when they were done for the day.

The Skyraiders finished their last pass. There was no point in aircraft remaining on station to fire their twenty-millimeter machine guns because there were no visible targets for them to shoot at. Whether the withering fire of Puff and then fiery burning effects of the napalm were enough to deaden or quiet the forces holed up inside Hill 975 could not be accurately guessed. There had to be some traumatic shock effect, but the NVA troops were notorious for being tough and enduring punishment, no matter what punishment was thrown their way.

As twilight began to expand the moving shadow thrown down by the western cliff’s great height, I prepared the small team we would use to encounter the particular pile of rip-rap and torn apart rocks where Nguyen, who’d been out there with McInerney, indicated his body was likely to be found. The Gunny lay next to me as I surveyed the scene, the particular pile of rocks so close that no binoculars were needed to study the approach or the indicated area. The main problem that became apparent, as the light began to wane, was the presence of enemy soldiers. The mountain had been deadly quiet since Puff had rained metal rain down upon every square inch of its surface and the Skyraiders had gone back and forth to their base to pour at least sixteen giant burning canisters of napalm down upon its sides.

The troops creeping out onto the heavily contested mud flat field of fire weren’t even in uniform if they were troops at all. Furtively, they crept out to retrieve their own dead or wounded, which appeared to number in the hundreds, if not more. There had been no notification, no request for a cease-fire or mercy of any sort by the implacable North Vietnamese sapper unit occupying the mountain. The crawling natives, only half-clothed, looking almost exactly like slowly moving parts of the landscape itself eased out from the brush surrounding Hill 975, and then moved out onto the flat to drag bodies back toward the hill, always positioning the bodies so they could drag them by their wrists and not their feet.

Not one Marine along the line fired a shot at any of the visible men. Neither the Gunny nor I and certainly not the platoon commanders had given any orders to shoot or not shoot. Everyone did the same thing. We all watched intently, and with some mild discomfort. The NVA had paid a huge price in attempting to overrun our position, and it seemed poised to repeat that same experience, but yet the small moving creatures out atop the mud moved with furtive but steady deliberation, seeming to disregard the deadly position they were placing themselves in.

Fusner, Nguyen and I, along with the most unlikely of volunteers, Sergeant Jurgens, would make the attempt to dig through the rocks and dislodge and return McInerney’s body to our lines.

“Go now,” the Gunny whispered urgently into my left ear.

My hearing had finally recovered from my body being placed directly under the trajectory of the Ontos 106 mm rounds when they left their tubes earlier. For physics reasons unknown to me the recoilless explosions when the charges were let off to send the rounds out were almost twice as loud, then those of the 105 howitzers, yet they packed a smaller less powerful punch upon arrival.

“It’s not dark enough yet,” I said back.

“That’s not the point,” the Gunny rasped out, his voice nearly a whisper. “They won’t fire on you retrieving the lieutenant’s body, any more than we are firing now at the retrieval of their own dead.”

“But what if they do?” I answered, in frustration.

“They left our belongings alone up on that plateau a few weeks back, if you will recall,” the Gunny intoned, this time raising his voice to a more normal level. “They aren’t monsters and they do play by a set of rules. They didn’t send their men out onto the field to be mowed down by our Marines. Somehow, they depended upon a similar code we might honor as they do.”

“But we can’t be sure,” I replied, knowing his argument had real gravitas while mine sounded a bit nervous and skittery.

Then again, the Gunny wasn’t going out there. The companies could not afford the loss of both the Gunny and I and we both knew it, and Gunny was the most influential and important among the two of us. No discussion had taken place about that issue, and there needed to be none.

“It’s your call, Junior,” was all the Gunny replied.

Suddenly another body flopped down into the mud along my right side.

I looked at the young lieutenant, and then over at his clone. Both looked to me like they were grade-schoolers, and I wondered how I, after only a month in the A Shau, appeared to them for both to refer to me, a fellow lieutenant, as sir.

I nodded once and then turned back to face the Gunny, the right side of my face almost in contact with the leech riddled mud.

“No, it’s your call, just as it has almost always been,” I whispered. “We’re going out. If we don’t make it, then in the write up about us would you please not tell anyone that we were this stupid?”

Only the second smile I’d ever seen from the man swiftly flew across the Gunny’s face before it was gone as it had never been there. 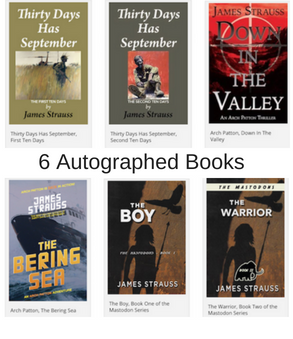