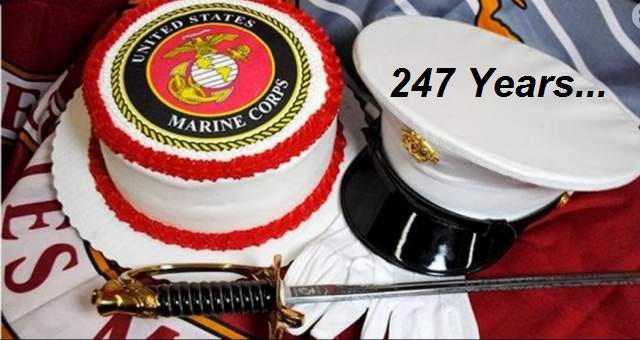 Today, November 10th, is the Marine Corps birthday, going back to 1775. Why has this birthday celebration become so popular and relevant in modern times.  The Marine Corps, a relatively small military service, with just 187,000 active-duty members, has been able to occupy a special place in the attention of the public, not only in the U.S., but in almost all countries around the world.  Some celebrations have only a few serving or veteran Marines (mostly from embassies or consulates) attending.

The Marine Corps Ball that I was the featured speaker at in Hong Kong back in the eighties was attended by over 1300 people, of which only a dozen were Marines of any sort, active or otherwise.  In Wisconsin this year, there are just under a hundred of these balls scheduled to occur, some before the November 10th official date, some on that date, and some after it. The actual date is not nearly as important as the celebration itself.  Marines hold themselves to be special, and that self-possessed belief has become shared by almost everyone else familiar with them, across the planet.

The Marine Corps has developed itself in the culture as an icon of stability, honor, integrity and as having a code of conduct that is admirable to all.  That cultural development is inescapable, not just bandied about by Marines and former Marines (not that Marines ever admit to being either an ex-Marine or former Marine in real life).  Toys for Tots is a big deal to the Marine Corps and to the population of the U.S. and is wildly successful.  Marines are known for helping the downtrodden, poor, disabled, children and so forth.  Whether they are actually all to be described by the performance of those things can be disputed from time to time and from situation to situation but the issue of the Marine’s rise to acceptance and admiration in general cannot.

The Marine Corps Balls held all over the world are attended by many who were not, or are not, Marines.  Those attending and participating, or at least viewing, the ceremonies are those who share the beliefs the Marine Corps exhibits.  Marines, all Marines, are first trained to be infantry combat troops and officers.  Specialties after that initial training are laid on top of the initial training.  Most Marines will never engage in actual combat, but then most of those military members sent into combat situations do not enter directly into the conflict on the ground or in the air either.  For example, 3.7 million served during the Vietnam war in that combat theater.  Only 375,000 actually engaged in combat.  Of that 375,000, 362,000 were wounded or injured.  Half a million Marines were part of that military contingent.  Of that half million just over a hundred thousand engaged in combat.  Of that hundred thousand 50,000, or so, were wounded or killed.  Combat is indeed dangerous.

It is the peacetime Marines that most Americans know.  The numbers of combat survivors coming home are so small that is unlikely that a regular citizen will ever meet one or have a conversation with one.  Peacetime Marines are always prepared to go into combat, however.  They keep their bases spotless and pristine, if you ever get to visit one, just like their appearance in uniform.  They most definitely, almost one and all, fit the slogan “The few, the proud, the Marines.”

There is no more famous military force in the world that measures up to the reputation of the United States Marine Corps and the USA should consider itself very fortunate to have created, nurtured and then supported this rather unique group of men and women.