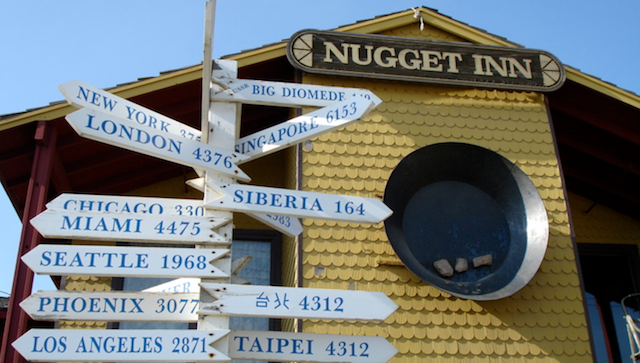 The airport at Nome isn’t an airport at all. It’s a hangar at the end of a long concrete pad. In summer the sun shines all the time. Twenty-four hours a day. There is no luggage claim. They put everything in one big pile, and then open the doors and let everyone at it. Like Bermuda was in the old days. You fly into Nome when the weather clears. Summer is a lot of fog and mixed rainy coldness. I flew in at three a.m. in the morning. Yet it seemed like noon. The constant light has a really strange effect on the human body, and I was not ready for it. You don’t get tired. Or, at least not at the right times and not with the right symptoms. So, once I got my single bag, I was ready to go. I hadn’t slept since crossing the border and landing in Anchorage the day before. Still, I didn’t feel in the least tired.

I took a taxi into Nome itself, which only has about a thousand homes, and maybe four times as many people. When I got out of the taxi, on Main Street, I was shocked. The town is like something out of Alice in Wonderland. For years people built homes atop the permafrost layer (that’s about four to five feet of earth, which freezes in the winter and thaws in the summer, while underneath it is always soft), so that many of the homes constructed back then have come to have a distinct lean. They tilt in every direction. Americans, like me, are used to seeing homes flat and level, at all times, so it is truly disconcerting to see homes leaning at weird angles, particularly since none of those angles are congruent with one another.

Wonderland. I had arrived in a misty cold and jumbled, Wonderland.

I walked around the place, hauling my duffle, for a couple of hours, just taking in the town. The raining had stopped, but the streets were still wet. They bore the eerie 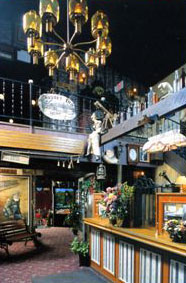 appearance of never having dried since they were poured. I was supposed to check in at the Nugget Inn, but by the time I was done walking around, it was still only five a.m. I went into the place anyway. There was no one at the front desk, or in the lobby. Nobody anywhere. I checked the place out. A closed and locked restaurant was located at one end of the building. Running right down the center of the place was an impressive bar. It stretched out toward the water, and was glassed in on both sides. I peered through the windows of the double doors, to see what I could of the place. “The Gold Dust Saloon” was etched across the door glass. As I turned, I accidentally leaned against the door, and it gave way. So I looked back, and then stepped inside. Nobody was inside. I dropped my bag behind a table, and walked through the bar. Behind the long counter, booze bottles were set row upon row, while dirty glasses littered the polished flat surface of the bar itself. I noted that there were un-bussed tables. There was also debris between them, littering the ancient hard wood floor.

I shrugged to myself. I realized I had happened onto a weird place in the universe...and at a weird time. Instead of departing, I went behind the bar and searched around until I found the ground coffe container. Next I brewed an urn of coffee, after I cleaned the filthy thing out. Then I started cleaning the bar itself. I worked for an hour, making good headway, until an older man appeared behind me. He made a comment, which caused me to jerk my head around when he spoke.

“The fryers need to be emptied and cleaned. No drinking until noon. You get the usual breakfast later, when we get some customers. If you work to lunch then you get lunch, and two beers, no more.”

I examined the man, as he delivered his short speech. His face was large and florid, and adorned with a well-manicured handlebar mustache. The kind I had always wanted to grow, but had never gotten around to. The man was also wearing a big yellow apron, which had the single word “Cochon” printed at an angle across its front. French, I knew, but I didn’t know the word. When he was done talking, he handed me a plain white. I took the apron and put it on. It seemed like the natural thing to do, in the strange universe I had chanced upon. I said nothing. I just got busy with the work.

I emptied the fryers, found large vegetable oil cans in the back, and refilled the fryers. I used a hand brush to work on the floors (“Cochon” had handed me the brush, and pointed down), and then applied stainless steel polish to restore all the industrial tables. The man finally stopped me when customers arrived. He handed me a small note tablet. I looked at him, holding the thing in one hand, but he just walked off towards the stoves, located down at the end of the bar. I watched him light all three.   He opened some egg cartons he had brought from the back. I wondered whether I should ask him something, or maybe say something, but then I knew what had to be done.

I started taking orders, trotting out my own Mont Blanc pen to write with. I passed out menus, scribbled orders, and cribbed the notes as best I could. I fastened the notes onto the clips on a small overhead turntable above the stoves. “Cochon” labored ceaselessly, never asking a question of me, and somehow able to figure out my written instructions. The breakfast crowd abated by nine, so I stopped working, and then leaned my back against the bar. I checked the big front pocket of my apron. I counted out twenty-four dollars in tips, mostly change. “Cochon” slid a plate piled awkwardly with sausage, scrambled eggs and white toast across the bar behind me. There were no coffee cups in the place.

“No drinkin’, like I said, till afternoon,” he murmured again.

I nodded, then got another bowl of coffee, and ate the breakfast, afraid of more customers walking in before I was done. But the run was over.

“Bus all the rest of the tables, and then get the dishes washed,” barked “Cochon,” throwing me a towel. He cleared my empty plate.

I did the dishes. By eleven the place was clean and all the work done. A few ‘coffee only’ customers slouched at the bar. They had the look of people waiting for the noon bell, when they could switch to booze. Before I had come, I had been told that people drink a lot in Alaska. “Cochon” came around the end of the bar. He motioned to me to sit with him.

“You work good. Do the lunch crowd and you can then have a couple of beers, maybe a hard drink.”

I smiled, but said nothing, in keeping with the twilight world I had entered. We both drank coffee slowly from big ceramic bowls.

“The bowls are from the Navy,” “Cochon” stated, admiring his own. “On destroyers you don’t drink from a cup. You drink coffee and hot chocolate from a bowl.” He looked out the window, toward the sea, his expression wistful. “I still keep my hand in. Got an old LCT from the war. Landing Craft. A hundred feet long, with a beam of thirty. Only draws three feet though. Should sell it, or rent it out. But I hold onto it because it’s a great rough water boat for running supplies between islands.”

I gestured knowingly, when in truth I was not able to distinguish an LCT from a Chris Craft. I proceeded to check out my Navy bowl carefully, and drank from it again.

“You want a full time job?” he said. My eyebrows went up. The question surprised me. I wasn’t sure what to say. I delayed for a few more sips.

“Well?” “Cochon” pressed me, rather forcefully, staring at the side of my face.

“Well, I already have a job,” I replied, slowly, while taking another sip.

Cochon examined me closely, taking his time to answer.

“Hell you say? Job? I know every job in this town, and every person who has a job. You’re not one of ‘em.”

His bushy brows knitted together when I did not immediately respond. Instead of saying something I eventually pointed out the window to the harbor beyond. I turned to look at him. A question mark appeared on his reddened forehead. I waited a few seconds, before adding words to my explanation.

“I have a job aboard that expedition ship, M/S World Discoverer, parked out there in the harbor. I don’t report aboard until three,” I said.

Cochon looked at me in obvious disbelief.

“You?” “Cochon” intoned. He then eyed me up and down. “You don’t look like any seaman I ever saw,” he concluded, after a few seconds.

I grinned. I was wearing Polo trousers, a Paul and Shark shirt, and my Dunhill jacket lay atop the bag that still sat near the front door. I didn’t look like any seaman anyone had ever seen in any port of the world. I looked much more like I belonged in the Channel Islands boardroom I had been in only one day earlier.

“I’m the anthropology lecturer for the coming cruise.” I stuck out my right hand. “Doctor Patton, former professor, and Department Head at the University of the Pacific. Late of Oahu, Hawaii.”

Cochon didn’t take my offered hand. He didn’t smile. He made believe my hand wasn’t extended, so I slowly took it back.

“Shit,” he said, instead. “I thought you were one of those goddamned alcoholics who roll in here all the time. They work and move on. I give ‘em booze for the work.” He stared at me intently.

“If you’re some hotshot professor, then why’d you do all that work for me?” he finally asked, one big meaty hand coming up to rub his right temple.

I grinned, not looking at him. I finished the dregs of my coffee. “I’m not sure. To have some coffee, I guess, then later because you told me to.”

I extended my hand a second time. “It’s Jack, to you,” I said, and then waited

This time, gingerly, he accepted my hand and pumped it.

“Besides, the breakfast was great,” I added. I got up and headed for the door to get my bag and my coat. I turned to wave, as I exited. Cochon was standing, motionless, with his Navy coffee bowl in his left hand. He made no move to answer my gesture.

“No, c’mon... who are you really? There’s no way…” I heard him ask, but I was already out the door. I stepped out of the building into the cool air.   My journey towards the jetty where my ship awaited had begun.