Shimmying is what Jimmie called it.  Darren slowly worked his way across the cinder block wide expanse of stone they called the anvil.  Diamond Head.

The mountain.  A small stretch of it required passing across a twenty-foot section of stone that fell away on both sides.  On the interior of the crater, which Diamond Head formed, it was a drop of fifty feet into bushes.  On the exterior side, the drop was four hundred feet straight down into a collection of jumbled boulders and rip-rap.

Jimmy Dorrenbacher had no fear of heights, not like the paralyzing fright Darren possessed.  Once Darren was safely across, Jimmie walked like a ballet artist over the entire expanse, laughing lightly as he came.  Darren didn’t understand how he did it, as just one glance down caused his own gorge to rise up from deep in his own belly.

Jimmy was Darren’s best friend and the smartest person he’d ever known.  He went to Punahou, the high class private high school on the island and, although only a young senior in high school, he was already accepted by both M.I.T. and CalTech in their highly touted engineering programs.  Darren would be lucky to get into St. Norbert College up in northern Wisconsin, and then only because his uncle was the head of the Music Department.

They made it to the very top of Diamond Head together.  The highest point of the crater rim wasn’t rock. It was concrete.  A pillbox had been built during the world war 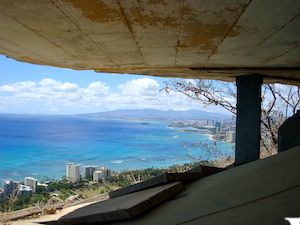 View from the ‘pillbox’

to allow full visibility and surveillance of the beaches by alert Army spotters.  The post had been abandoned right after the war, along with the cave storage areas dug deeply throughout the crater complex.

After one or two explorations the boy’s attention had gone back to the top of the pillbox.

They climbed the mountain every Sunday.  At eleven there was a special classical music station broadcast over the radio.  They set up the battery-powered machine and tuned in every week.  The show always opened with Claire de Lune by Debussy, one of their favorites.  On each Sunday they followed the same routine.  Climbing, hauling the radio and paper-sacked sandwiches along with them. They set up, surveyed the huge beauty of the Pacific Ocean along with the entirety of Honolulu below them, and then complained bitterly about being stuck on such a small island while other kids had the whole run of the United States to explore and play in. Every Sunday they hoped and prayed that their island imprisonment would come to an end soon.

Surfing was the only thing either boy thought they might miss after the got back inside CONUS (the continental U.S.).  Darren stared down to take in the break at Canoes, the surf break furthest out from where they sat.  It broke along the shore out toward the great salt water pool complex.  Next in was Queens Surf, another break paralleling the shore.  Closer in was Kuhio and then Threes, which broke just off Waikiki Beach on a good day.  It was a legend that Duke Kahanamoku had ridden from Queens all the way to the beach, to arrive standing up on dry sand when he was done. Over a mile and a half of pure clean surf riding.  Neither boy had ever made it past Queens. Conditions had to be just right. The board had to be perfect. The surfer had to be an expert.

“Do you think we can run the coast today?” Jimmy asked Darren, chewing on a leftover teriyaki sandwich.

“Nope. Conditions are too low.  Look at Queens, the break isn’t even over the reef. The high tide won’t change that much later. If we can’t get a great launch off Queens then nothing works. Not to mention the crummy rental board we’re always stuck with.

The boys never had enough money.  Jimmy worked at the coin-operated laundry on Kapahulu and Darren was a busboy at Fort Ruger’s Cannon Club.  They saved almost every penny they earned for college.  A decent surfboard was a dollar an hour to rent.  They always took the twenty-five cent beat up special and shared it.  One boy treaded water, waiting for other to return with the board after riding as far as he could.  They were considered ‘Gremmies’ by the other local surfers.  Beginners.  Surfers to be avoided at all cost.  On their first day together at Queens, they’d been approached by a group of the locals.  They’d been threatened.

When the big nasty Kanaka leader had threatened to kick Jimmy’s ass Darren had stepped forward.

“Not him. Me. I’m used to having my ass kicked. Really. They did that in school all the time, then dunked my head in a toilet. They called it ‘swirling.’

“Is there a toilet around her I’m ready.”

The guy had looked Darren up and down for almost a full minute.

They’d been left alone after that.

The hours passed and the music program ended. It was time to depart. Their families would be expecting them back, never having any idea where they’d gone off to. They came to the stone anvil. Darren always went first. He huddled down to make his way across like a slow caterpillar.

“You know what impresses me, Darren?” Jimmy asked of his best friend.

“No,” Darren replied, his full attention concentrated on starting out across the thin stone bridge.

“You’re scared to death but you come up here every Sunday. You never fail to cross this stretch. Why do you do it?”

“I don’t know.  I like sitting at the top.  I like listening to the music.  I like that we are together in doing it,” Darren responded.

‘Yeah, but you could go through the tunnel, get to the inside and climb up the bushes to get up to the top of the point.  You don’t have to do this crossing, which is so hard for you.”

“I don’t want you to cross alone,” Darren said, his voice strained, his full concentration on getting across the dangerous stretch of the mountain.

“Now that’s what I mean. That’s impressive. Uncommon. You’re not a regular kid. I can run across this thing as many times as I want and never come close to falling. You don’t see it. You care. My parents are right about you,” Jimmy said, humor in his tone.

Darren stopped his inching forward progress to look back. “Your parents said something about me?  What was it? What’d they say?”

Darren went back to shimmying along, one inch at a time, looking only down at the stone right under his nose.  Drops of perspiration dripped to the whitish surface as he moved across.

“You’re my best friend. I don’t know what an affinity twin is. We just seem to have a lot of fun together.”  Darren squeezed out the words, closing on the other end of the anvil. All of a sudden he felt a great pressure on the small of his back.  Jimmy’s right foot landed in front of his nose, as the other boy scampered over him and across to the other side.